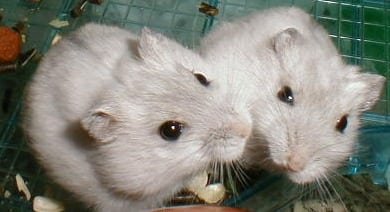 Is a hamster’s life less meaningful than a dog’s or cat’s life? I don’t think so. On one of those neighborhood news forums, someone posted that she has two hamsters in need of a good home because her daughter has “gone through that phase.”

I typically don’t post on these sites, but I was motivated to do so because I felt the lesson she was teaching her daughter was that it is OK to get rid of hamsters because they are disposable. To me, hamsters are not disposable. Getting rid of a pet—regardless of the type—is never OK, and I said so. I added, “Hamsters do bond with people, and it’s a shame the hamsters lose and your daughter loses a potential life lesson.”

In what I must say was a thoughtful response she wrote back, “Obviously you are not a parent. If you were a parent then you would understand that kids are still on the developmental curve therefore they are learning what’s important. Kids want what they want and they are still learning what’s important and the impact of their decisions. You are forgetting one of the most important lessons in life which is it’s ok to admit when you have failed and to do your best to do the right thing to make it right. It was a difficult decision for my daughter to give up her pets. She did not make this decision without thought as you assumed she did. Do you wish my daughter to keep the hamsters and continue to just give them the minimum attention that her schedule allows or do you wish they find a loving home?”

Well, she’s right, I am not a parent. But I still don’t get it. Of course, the hamsters deserve more than minimal attention. I don’t know her daughter’s age, but I suggest that she’s the parent and can mandate her daughter to continue to care for the hamsters because it’s the right thing to do. And, if all goes off the rails with her daughter, I’m unsure why she doesn’t (as the responsible parent) take over hamster care to offer the lesson that these animals are not disposable.

Still, as this woman correctly notes, I am not a parent. So, perhaps I’m being unrealistic.

She also suggested that if I care so much, I should take the hamsters.

I wrote back that I think I’ve done my share for animal welfare, and she can verify that with a peek on my website, and I’m not the one who signed up to take the hamsters (never mind that they may not enjoy our cat).

She replied, “She (the daughter) wants to be a vet when she grows up and she recently sold lemonade and water during the Lady Gaga concert to raise money for PAWS. She earned $70 and we dropped off the check today. Maybe the wording of my message was misleading given that my daughter has gone through having different pets over 12 years. Again, we just want to do the right thing.”

I don’t doubt that she wanted to do the right thing as a parent. She implied I was being too judgmental. Maybe she was right, as she continued, “They do not hand out an instruction book at the hospital on how to raise kids so I am just doing my best to make sure that my kids are good citizens, they care about all living things and make a positive contribution to this world. We are all trying to do our best!”

However, I still find it hypocritical—raising money for animal welfare while she simultaneously wants to give up the hamsters because she’s gone through “that phase.” If life circumstances truly forced the daughter to “fail” the hamsters that’s one thing, but that’s unlikely the case. Or, am I making too much of hamsters and also not understanding what it’s like to be a parent as has been suggested?

One more thing, I do hope the daughter becomes a veterinarian or a veterinary nurse—two of the best professions on the planet.