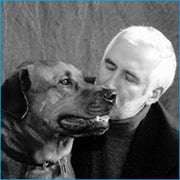 Dr. Ian Dunbar says dog training might be going down the tubes.

Dunbar, arguably the most influential dog trainer of the past four decades, shifted the standard from punishment based techniques to positive lure reward training, motivating through food and toys. Dunbar first appeared on the scene when most dogs weren’t even trained at all. It was Dunbar who supported the notion that good canine citizens require early socialization. In 1981, he developed the first puppy classes likely ever offered, and he marketed the idea. Dunbar’s authored several books, and founded the Association of Pet Dog Trainers.

There’s no argument that his influence has been profound. But as he rolls past 60 and toward typical retirement age, instead of bursting with pride, resting on his numerous accomplishments, and handing the leash over to others – he’s worried about who will be taking that leash.

“If we don’t change what’s happening in dog training, I’ll look back on nearly forty years as a waste,” he says. “That’s why I’m out talking. That’s why we began the webiste (www.dogstardaily.com).”

In an interview from earlier this year, Millan conceded he’s only one person with one point of view. True enough. But Millan has big business behind him, websites (including one that is membership based), best selling books, and a line of products, not to mention that TV show. No wonder, there’s influence. No wonder, some trainers do follow Millan as their leader of the pack, accepting his idea that training by being dominant forces dogs into a calm submissive state.

It’s one thing to sincerely believe a certain methodology to train dogs. It’s another to purposely mess up dogs for economic gain. “Today, clients hire trainers to deal with behavior problems the trainers themselves created,” says Dunbar. “There was no problem (with the dog) going into (the training classes), but causing problems means more business.”

Dunbar’s wife, Kelly Gorman Dunbar, also a trainer, disagrees. “I don’t believe that people are actually trying to mess up dogs to get more business, though I suppose that does happen. Mostly it’s trainers following bullying techniques who find themselves causing problems, or trainers who are just ignorant.”

Gorman Dunbar agrees with her husband and others that dog training today has in some ways regressed.

It may begin with Millan’s assertion that we need to dominate our dogs. “It’s a bit ridiculous isn’t it?” says Gorman Dunbar. “Why would we have to dominate our best friend to (make the dog) comply? Years and years ago, I went to a traditional (dog) training academy (to train people to train dogs). I had a wonderful Rottweiler puppy (named Ivan) who I had bonded with so closely for the first six months before we began the program. We were told dominate over our dogs, and it was compulsion training. Within a few weeks, my former best friend was growling back at me. And the school’s response, ‘Well, then correct him really hard on a prong collar (a spiky collar with spikes pointing inward around the dog’s neck).”

What Gorman Dunbar soon realized is that Ivan was correcting her for hurting him, and the response she was instructed to offer was to correct back even harder. “It became a vicious circle,” she says. “All Ivan learned was to dislike training and to not trust me. How does that make sense?”

“And I’m afraid that’s what’s happening all over the country today,” Dunbar adds. Some of the theories espoused today by Millan and others are based on long disproven 1950’s and ‘60’s notions of training, and others are simply “made up.”

“A lot of trainers are out there who can’t train dogs, but they can jerk them around and zap them (with electronic collars),” says Dunbar. “For some it’s appealing for us to feel we can dominate our dog, but for most owners, in our guts we know this is no way to treat our best friends.”

Dunbar says he began the www.dogstardaily website so the public can see videos of how to motivate dogs through positive reinforcement training; can read what others (some of the most well known experts on behavior and training in the world) have to say on nearly 30 blogs; hear audio descriptions on training techniques; read articles, and have one on one contact with the Dunbars and their blogging colleagues – and all for free.

“Dog training shouldn’t about intimidation, it should be fun again,” says Dunbar. “I’m determined for dog training to make a quantum leap in the direction of motivation and fun by the end of the year.” Unfortunately, it’s only a matter of months before the year ends.