Was Shooting the Gorilla the Best Choice? 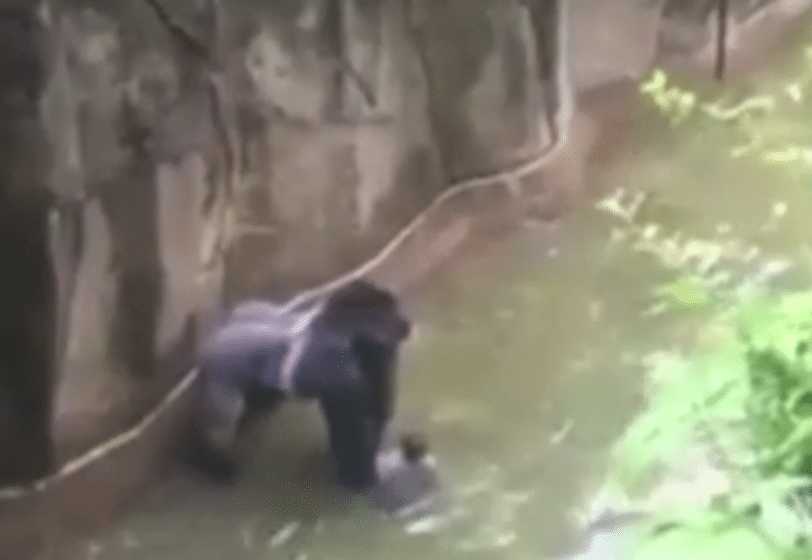 The 17-year old male silverback gorilla was shot and killed after a 4-year old boy fell into the gorilla exhibit at the Cincinnati Zoo.

It’s unclear exactly how the boy managed to get into the exhibit, but clearly he managed. 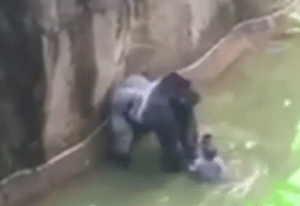 The gorilla who happened to be closest to the boy was Harabe, a 450-lb. silverback, an endangered Western Lowland Gorilla.

Video taken by a bystander clearly shows the gorilla, who could kill the boy instantly, showed no ill intent. However, quickly, the gorilla seemed not to know what to do, dragging the helpless child through the water.

Gorillas are vegetarians, and exceedingly peaceful animals (except when threatened or one silverback challenges another). In fact, a relative of the lowland gorilla – the mountain gorilla are habituated to people in Rwanda, where thousands of tourists visit annually. We were among those tourists. Here people hike in the Virunga Mountains into the gorilla’s homes. The gorillas go about their business as if people aren’t even there, yet the tourists are often only a few feet away. When the gorillas get that close, the only real concern is that the gorillas can catch our germs.

Other instances of children falling into gorilla exhibits have occurred over the years. And the ending has been very different.

In 1986, a five-year-old boy Levan Merritt, tumbled into the gorilla enclosure at Jersey Zoo in the UK. Video filmed by a bystander showed Levan lying on the ground, bleeding from the head and unconscious. Jambo, a male gorilla, approachied the boy and “checked on him,” extending a hand to stroke his back. When Merritt comes to, wailing, Jambo, seemingly startled by the cries, went off in a different direction. At that point, zookeepers immediately moved in to rescue the boy.

Ten years later, a three-year-old boy fell nearly 20 feet into the gorilla enclosure at the Brookfield Zoo near Chicago. This time, a female gorilla named Binti Jua picked up the unconscious boy, while carrying her own infant on her back, and guarded him from other gorillas. In an incredible show of maternal care, Binti took him right to a door so that zookeepers could retrieve him. Binti actually helped out, and made the recovery easy. 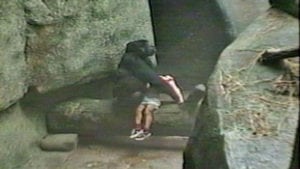 Binti-Jua saved a little boy who fell into the exhibit with gorillas at the Brookfield Zoo
Cincinnati Zoo Director Thane Maynard said “We had no choice.”
Did they have a choice? Sure, they could have shot the gorilla with a tranquilizer gun, but as Maynard points out, that’s a risk – it’s unknown how the gorilla might respond once shot. And it would take some time for the tranquilizer to take full effect. He might have even accidentally stepped on the child, or example. Or being shot, understandably, might have angered him.
Another choice might have been to toss very tempting food on to one side of the exhibit – and perhaps the child would have been forgotten about….but in the heat of the moment, this option might not have been discussed. It hasn’t been discussed in the swirl of media – but might have been my ‘go-to choice.’
What would you do? 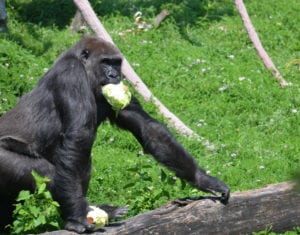 Calls have been made blaming the zoos for keeping the gorillas in the first place. I say thank goodness they do –
Those Mountain Gorilla we were privileged to see in Rwanda are the only great apes holding their own. Chimpanzee, bonobo, both orangutan species and the other gorilla species are all suffering from dwindling numbers, critically endangered due to habitat destruction, and often intentional destruction by humans.

Ecotourism (Terra Incognita Ecotours – not everyone take folks on ‘gorilla trips’) has saved the day for Mountain Gorilla making it worthwhile in Rwanda and Uganda to do all they can to protect them  In Rwanda, tourists dollars have saved the gorilla, but has also provided for improved education for countless children and infrastructure improvements in nearby cities, and throughout the country. 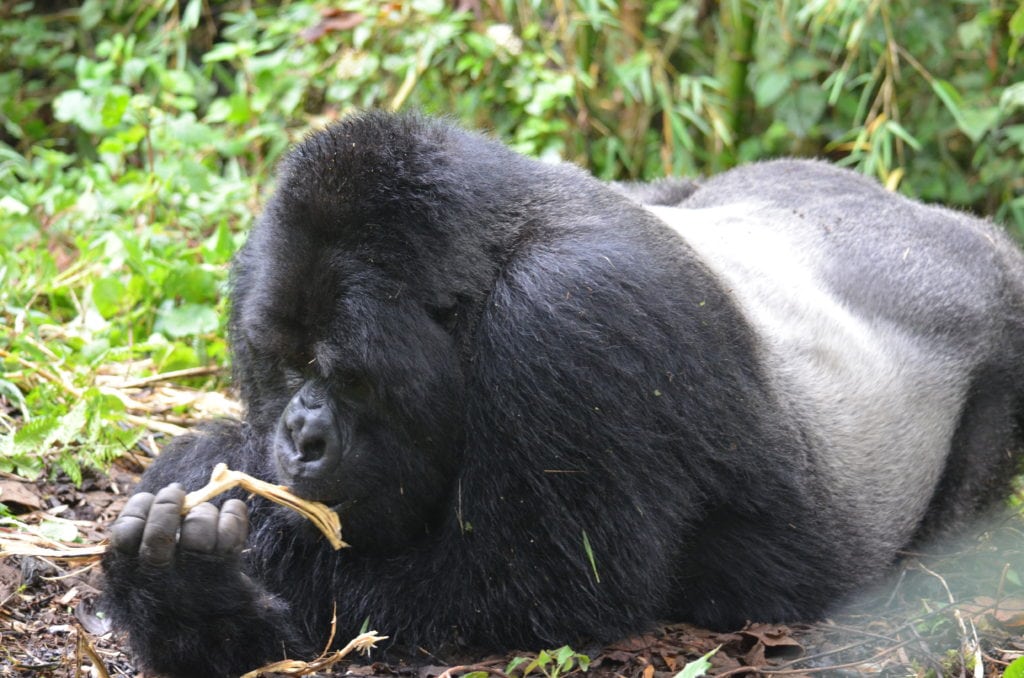 At the time I took this picture – and without a zoom lens – the largest male silverback on the planet
However, should something occur to the Mountain Gorilla medically (that the amazing Mountain Gorilla Veterinary Project can’t handle, which is unlikely but possible) or politically (since the Mountain Gorilla live on mountains in only three nations), the species could disappear – unlike all the other Great Apes, there is no back-up population in zoos. 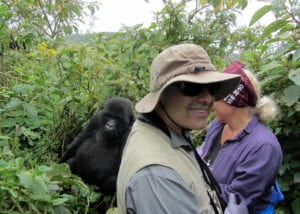 Robin and I on a close gorilla encounter – the gorilla moved toward us. And NO we did not feel threatened

Like zoos or not, the very survival of our cousins – the Great Apes – may depend on zoos and wildlife parks. That’s a sad reality. And I don’t at all buy the refrain, “then let them die out.”

I don’t blame the Cincinnati Zoo, or any zoo for maintaining gorillas (as long as they do so within appropriate guidelines).
Whether or not the Cincinnati Zoo acted too fast to order the fatal shooting of Harabe is another matter. One petition wants to criminally charge the boy’s mother – and i don’t know enough to know enough, though obviously she didn’t control the movements of her child, who having nothing to do with the gorillas might have been more seriously hurt falling into the exhibit.
With my interest in great apes, have been asked to comment on the incident.  However, I don’t have an absolute answer. It’s difficult to second-guess saving a child, and sitting where any of us sit, it’s very easy to second guess….Still, I wish the zoo might have tried throwing a treasure of food into the exhibit.
Clearly, what happened was tragic.