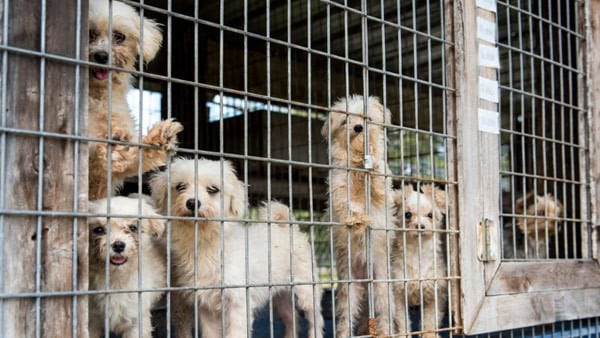 URGENT: This is scheduled to be heard today. Please act NOW!

There’s a proposal to prevent communities in Illinois from limiting pet store sales of dogs and cats in the future and to roll back ordinances that have already been passed to limited pet store sales, previously passed in Chicago, Waukegan, Warrenville and Cook County.

It’s well known – NO responsible breeder ever sells to a pets store. So it’s clear where they’re sourcing the poor dogs and cats from.

The group behind this bill is a coalition that interestingly calls itself the Illinois Pet Lover’s Association (IPLA). This includes,  American Kennel Club, Illinois State Veterinary Medical Association, Pet Industry Joint Advisory Council, and the Illinois Federation of Dog Clubs & Owners, and I have reason to believe other players who benefit from pet stores that sell dogs and cats.

PLEASE contact YOUR veterinarian (if in Illinois) and explain your interest in this bill. It’s not a good thing for our pets, and is being heard today, and the state veterinary medical association is in support.  Or join the Facebook page, Veterinary Professionals Against Puppy Mills. Today the National Association of Veterinary Technicians in America stood and said they oppose this bill.

However, the American Kennel Club (AKC), is a supporter. I contacted the AKC. While refusing to do a live interview, they did say I can read their response on air, which I did HERE on my WGN Radio show, and offered my comments.

Here is the written response from  Sheila Goffe, AKC VP of a Public Relations. My comments are in italics and labeled as my own.

As written, this bill establishes health and welfare standards for retail pet stores and requires that pet stores only obtain pets from breeders that do not have health or welfare violations of federal Animal Welfare Act standards. *

Note: *We are also concerned about the recent removal of USDA-regulated pet dealer listings online. Removing easy access to documentation will make it more difficult for positive and transparent pet welfare and retail oversight initiatives like this to be fully enforced. We support the need to protect privacy, and we understand that the issues causing removal of the documents are in the process of being resolved so that appropriately redacted records can be made available again in the near future.

Steve Dale response: Wow – you concede right here because of new changes (which you apparently disagree with –  as do I – but are real) from the United States Department of Agriculture which don’t allow for anyone to go online to verify if “breeders” have had past violations. For whatever the reason USDA has (at least for now) shut down this public information and transparency.  We agree, that’s wrong. But you can’t determine this if there were previous health or animal welfare violations. This FACT should void the proposed bill right there because it’s not possible to do what you say consumers or interested parties should to to verify a “breeder” selling to pet stores is without violations. Currently, there is no way check this.

Also, I note the use of your word breeder. That’s an insult to breeders you say you support. Who are you putting them into a bucket with?  NO responsible breeder ever sells to a pet store.

The bill requires pet stores to disclose health information and background information about available pets, giving consumers important information about the background and health of the pet they are adopting. We encourage all pet adoption groups to provide the same level of care and transparency as required in this bill.

Steve Dale response: Great –except that in the past pet stores have not been completely truthful with the information provided to the public. Having a watch dog to “police” this information is a good idea, though not practical. So, who is to determine that info provided by pet stores is the truth?

So, now the AKC is suggesting adoption groups mislead the public by not being transparent? Are you kidding? Or perhaps I am misunderstanding….Of course, by law, municipal facilitates  around the country must accept any animal that goes through their doors. And by policy thousands of open admission shelters do the same. They don’t ask about the history of that animal, and often times if they do ask – they’re not going to hear the truth. Though, of course, knowing all they can about the animal coming in is a good thing. Their mission is to save lives. Is this life-saving mission now a problem for the AKC?  Also, do you represent others in the coalition with your views regarding mistrust of shelters?

The bill is also progressive in that it supports choice for all pet owners and future pet owners, and restricts recent attempts by some communities to limit which pets people can get. An important part of ensuring the success of a pet with a new owner is making sure it’s an appropriate fit for the owner’s lifestyle. We believe valued pets come from a variety of sources, including breeders, pet stores, rescues, and local shelters – and these choices should be available to everyone. In fact, when people can’t get a pet that is an appropriate fit for their lifestyle, those pets are more likely to end up in the shelter system.

Steve Dale response: Progressive? That depends on your definition, but setting back laws which have been passed by communities is in my view (and by definition) regressive. Pet issues aside, shouldn’t communities be able to determine what is sold (or not) at local retail stores. For example, Chicago banned sales of spray paint to decrease graffiti. In some communities alcohol cannot be sold on Sundays. Aren’t these decisions up to local government?

Specific to pets, yes – people should have a choice to purchase where they desire. But pets are living, breathing emotional beings – not washing machines. Who speaks up in their interests, and against mass breeding? Apparently not the AKC.  Quite the reserve seems to be the case. The AKC is support mass breeding.

You are SO correct when people can’t get a pet that is an appropriate fit for their lifestyle, those pets are more likely to land in the shelter system. That is EXACTLY another issue with pet stores. Hopefully shelters and rescues are somewhat discerning about who can adopt. And shelter and rescue employees and volunteers are well-trained, or at least that is the hope. Absolutely, that knowledge ten fold – at least concerning their own breed – when it comes to responsible breeders. They know their stuff. And they have views on exactly who should or should not have their dog or cat breed.

In my experience at pet stores, employees have limited pet knowledge (at best) and will only ask one question before an animal is purchased: “Will that be cash or credit?”

I do thank Sheila Goffe of the AKC for answering. And as I already have previously indicated, she can join my on-air live (or on tape) anytime.