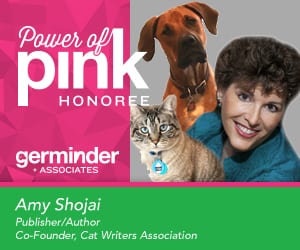 Amy Shojai is a superstar among pet writers. She may not be a household but she sure is among the households of those who write about pets, and who are deep into reading about pets. Shojai has been an important and prolific author of pet books for over 20 years Shojai has been awarded the Lea Ann Germinder’s Power of Pink Award, and the press release is below. I have known Shojai and have admired her work for a very long time.

Shojai, a certified animal behavior consultant, is a co-founder of the Cat Writers’ Association, and has earned many awards for her work. Back in 2004, I was honored to receive an award named for Shojai, the Shojai Mentor Award.  Shojai’s contribution to pet writing as a profession is undeniable. 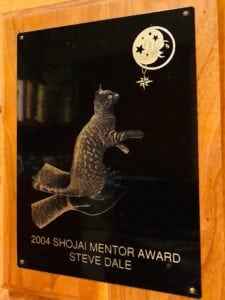 Germinder + Associates has named Amy Shojai, a co-founder of the Cat Writers’ Association (CWA), publisher, author and pet lover, as the eleventh #Germinder20 #PowerofPink Honoree to receive the award. Shojai has designated the CWA to receive $1,000 for her Honoree donation. To read more about her story, click here.#Germinder20 #PowerofPinkHonoree

“I am honored to be among the stellar group of individuals singled out by Germinder + Associates,” said Amy Shojai. “This recognition means even more, coming from Lea-Ann, a professional who has taught me so much over the years about professionalism, collaboration, and putting passion to work. I not only admire her as a colleague, but I treasure our friendship.”

Germinder and Shojai first met when the CWA hosted its conference in Kansas City. When Germinder launched Goodnewsforpets in 1998, Shojai embraced the concept from the beginning and signed CWA on as the first media sponsor of the site as a way to promote member books and accomplishments. Since that time they have collaborated on many other projects and ways to promote CWA sponsors and members. It’s that collegial spirit that Germinder treasures the most. 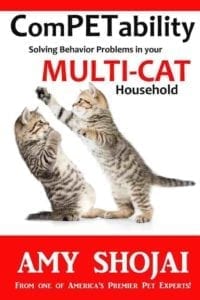 “I’m so thrilled to announce Amy Shojai as the 11th Honoree. She is the best of collaborators. Now we get to celebrate her — the launch of her Write Schtuff Coaching webinar series, honor her mentoring and coaching of writers through the years, and celebrate again her co-founding of CWA with the 25th Anniversary of the CWA Banquet and Conference in St. Louis next year,” said Lea-Ann Germinder, APR, Fellow, PRSA, Founder and President of Germinder + Associates, Inc.

Amy is a certified animal behavior consultant, and nationally known authority on pet care and behavior. Her newest project is her “Write Schtuff Coaching Series”. The online presentation is live and recorded for replays, in which she ask attendees what they need and want, answers questions, give a PowerPoint presentation, offers handouts and other perks, and recommends no-to-low-cost resources that she’s found helpful in her own work.

Shojai began her career as a veterinary technician and is the award-winning author of more than 30 prescriptive nonfiction pet books, and an animal behaviorist THRILLERS WITH BITE series. Amy has also published more than 2,000 articles and columns and today “channels her inner cat/dog” in her work. Amy created the expert puppy and cat behavior content at About.com (now TheSpruce.com), has written features for dozens of online venues including Chewy.com, Huffington Post, Caster.com and Dogster.com, provides a weekly award-winning P’ETiQuette newspaper column, and produces a free E-newsletter Pets Peeves.

#Germinder20 #ThePowerofPink was announced in January 2018 as part of the celebration of Germinder’s 20thAnniversary. The women’s storytelling initiative highlights the founder’s story of breast cancer survivorship and also shines a spotlight on 20 leaders whose stories have touched and inspired Germinder to success. Initial donations have been made in honor of Rache Simmons, MD donation to: The Weill Cornell Breast Center at the Weill Cornell Medical College/New York Presbyterian Hospital, an integrated, multi-disciplinary care center where Germinder was treated for breast cancer six years ago. Another recipient is the Clara Goy Foundation in memory of Germinder’s brother-in-law, Gene Melleno, a girl’s high school basketball coach who passed away Jan. 1, 2018. Other donations have been made to the Jan Hus Community Outreach Program in honor of Germinder’s immigrant great-grandmother Marie Therese Kacin and to the News Literacy Project.