Animal Welfare League: Are They Offering the Best Welfare? 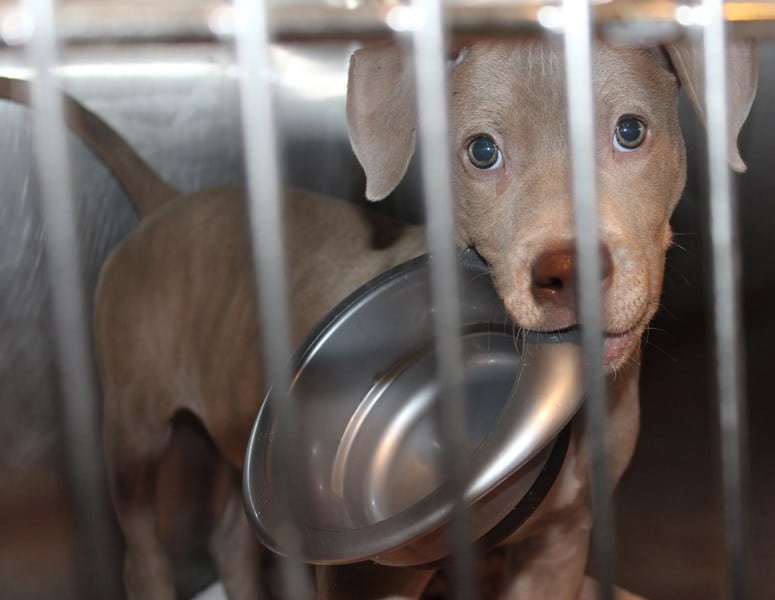 The Animal Welfare League (AWL) (both the Chicago and Chicago Ridge locations) relieves a great deal of pressure from Chicago Animal Care and Control and the Anti Cruelty Society, both of which also offer open admission. If open admission AWL did not exist, all the animals they accept would be funneled elsewhere.

Sadly, there are certain realities that correspond with accepting animals with no (or few) questions asked in an open-admission facility, such as AWL. When these facilities become over-burdened, the shelter director is often blamed (a fact I will never understand, because the problem is that there are too many animals being relinquished and too few places for them to go).

The reality is that there are typically more euthanasias at open-admission facilities than at no-kill shelters. And, what some don’t understand is that this is more than a matter of philosophy, as no one wants to kill. It’s a matter of practicality, since all animals are accepted in the first place via open-admission (some in good health, some not, and all kinds of temperaments). It’s also sometimes a matter of space.

Having said all that…

No matter who you are, there are shelter standards. There’s never an excuse for consistently dirty conditions, shoddy veterinary care, or unethical or misleading activity, which may deceive donors.

I am also of the belief that all animal shelters must provide the “Five Freedoms” (described below).

Several volunteers began to speak out on social media regarding allegedly poor conditions at AWL locations. These allegations included AWL setting low-bar standards for euthanasia as well. In fact, according to online reports, AWL will allegedly euthanize when requested by municipalities or other shelters, and AWL is paid to do the nasty deed. And, there are a whirlwind of stories regarding dog flu at AWL (if that is even what has plagued the facility).

Linda Estrada, director at AWL Chicago Ridge for 22 years, vehemently denies the allegations. Online, people quickly told me, “Of course, she will deny.” But, please note that others with whom I spoke off-the-record denied the allegations as well.  Such off-record sources are valued, because one assumes if their names aren’t used they have nothing to lose and will be truthful.

Before publishing my blog, I had asked several people online for proof of wrong doing, which I hadn’t received (though I viewed a wide assortment on social media).

Now, I have received that proof, or what appears to be proof. Here is one of several pages indicating veterinary care.

I verified with a veterinarian what I thought to be true. Treating with all the drugs in question is surprising, so much so that it is hard to believe. The veterinarian I spoke with said to treat a dog this way is so shocking that the Illinois Veterinary Licensing and Disciplinary Board may be interested in reading this documentation (and more like it, which was delivered to my inbox as well).

Another example: This dog was spayed, but she wound up with an emergency c-section on November 29, 2016. How does that happen? 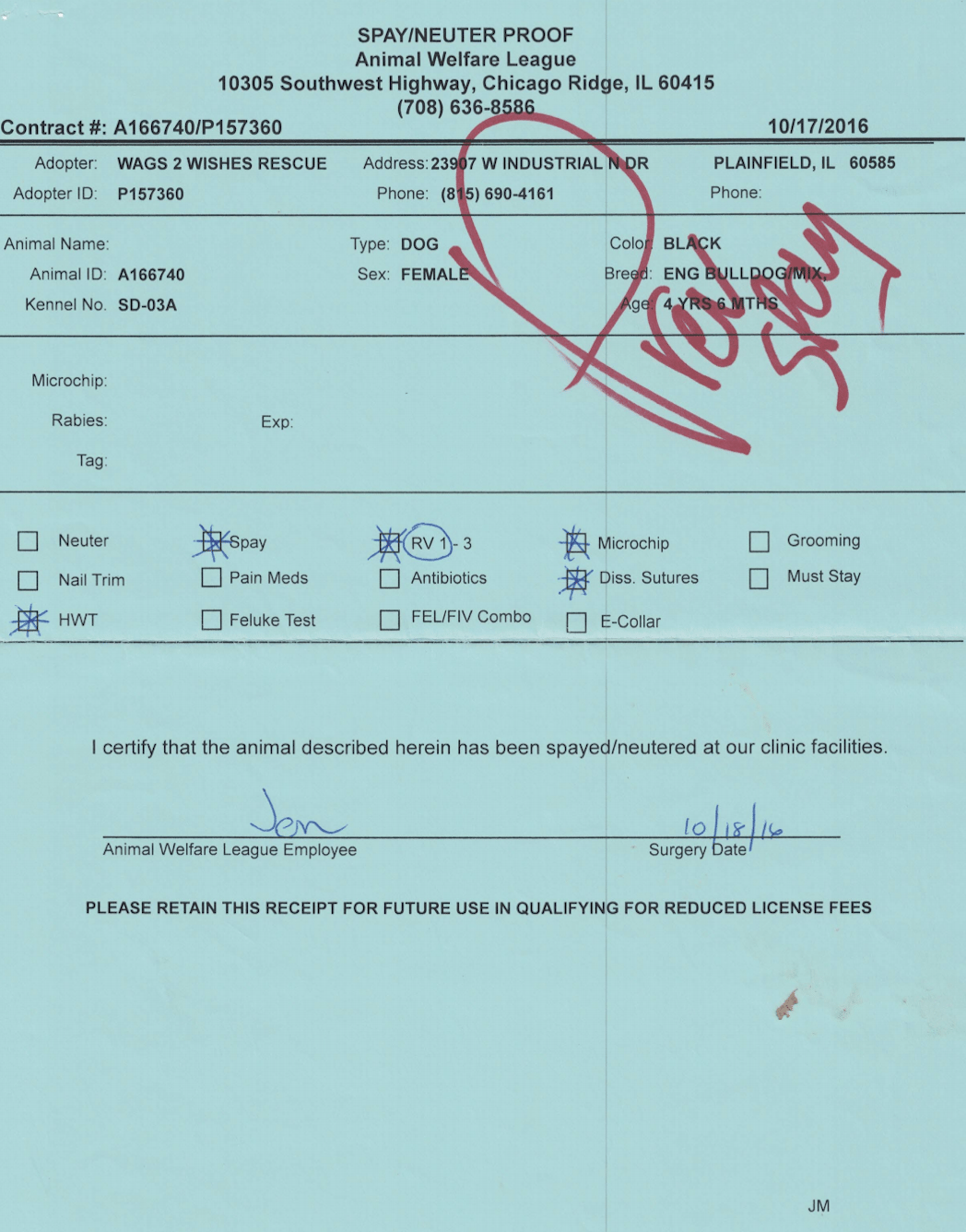 Images of filthy conditions were also sent to me.

Yes, if you wait long enough you can catch even the best animal sheltering facilities at their worst looking, mostly when feces isn’t instantly removed. Still, these pictures, which show some deplorable conditions, seem to demonstrate a problem. I am more familiar with the AWL location in the city, which is understaffed and has fewer resources than the Chicago Ridge location. I previously asked AWL about this publicly and privately without response.

So, where are we now?

It’s a game of one side saying one thing (and I now understand there is documentation to back up much of what’s being said), and the other side denying with some plausible explanations.

The problem: This isn’t a game and lives are at stake.

In the mix, there are people who are seemingly “out to get” Ms. Estrada and/or board members and/or the organization as a whole. Estrada believes that a former volunteer who was released of her duties is behind this.

What’s the truth? I don’t know; it’s likely somewhere in between, I suspect.

Let’s start with this. If you want to close AWL’s doors, you are hurting countless animals. AWL is needed. They serve a community that is underserved and may have little financial means. I’ve seen with my own eyes a family bringing in a litter of parvovirus puppies to be euthanized, as one example (they were clearly too far gone). For all the emails I received regarding concerns (again with some documentation now), I also received emails from a grateful community.

AWL is needed. However there is NEVER an excuse for not providing humane care. Clearly, between all the rhetoric on both sides, something is seriously amiss. And, by all accounts, some of what’s wrong could and should have been addressed years ago.

It has been suggested (online and via private email to me) that I lead a non-partial group to visit. However, we’d have no authority. Also, when you know company is arriving, you clean up. Instead, I suggest AWL install cameras for any member of the public to view 24/7. Those most critical of the AWL can raise money online to pay for this. I have no doubt that this can happen (and is not extraordinarily expensive). If AWL has nothing to hide, why not? Offering this sort of transparency will go a long way to restoring lost trust.

I also believe Estrada and some board members need to take on questions directly from the public. There’s no legal obligation to do this, but if they are not guilty—as they maintain—they should have nothing to hide. Estrada told me she would be willing. I think animal welfare advocates can push for this and hopefully everyone involved can have a civil discussion. Having said that, by reading social media posts, it seems clear that some of this angry discourse is motivated and fueled by personality issues, perhaps emanating from disgruntled volunteers and/or staff. Still, I endorse the notion of a public forum.

If AWL doesn’t accept either of these steps perhaps there is a different idea I haven’t thought of to restore the faith of animal welfare advocates. I’m told there is even more documentation I haven’t seen that further implicates AWL. I can’t comment since I haven’t seen it, but I will say that this all saddens me.

Here are those “Five Freedoms” I referred to above. If a sheltering facility isn’t providing these, they are not meeting animals’ needs, in my opinion: