On one visit to the Animal Welfare League (AWL) of Chicago Ridge, Village Trustee Edmund Kowalski witnessed not one but two dogs gasping for air, obviously in respiratory distress. “No one saw these suffering dogs, or worse if they did, they weren’t receiving veterinary care. The images will haunt me the rest of my life. The neglect I witnessed, was in my opinion, nothing short of criminal.”

U.S. Congressman Daniel Lipinski (3rd District) sent the letter (below) on September 6 expressing concerns to the U.S. Department of Agriculture regarding the AWL facility and the validity of previous inspections based on a plethora of evidence. Suffice to say with all going on these days in D.C., it’s impressive that a Congressman would support non-voters with four legs with such staunch conviction.

Both local and U.S. government officials are now asking questions

I’d argue that AWL and their Board of Directors have done this to themselves. And arguably, to indefensible animals who are supposed to be in their care.

Animal Welfare League has long been rumored to have serious problems, and it all blew up in January when volunteers, ex volunteers and ex staff banned together as REFORM AWL CHICAGO RIDGE. Their social media messages grew and quickly gained attention of this reporter as well as other media in Chicago, and village trustees in Chicago Ridge.

Mayor Charles Tokar and village trustees wanted to find out what was really happening and determine if they could decipher sour grapes and on the-job personality clashes from real welfare issues. Most of all the village wanted to do the right thing.

Kowalski says the stories he heard from those inside AWL and ex-employees and ex-volunteers were so consistent from so many people. “That does suggest there’s at least some truth. Then when I met with AWL leadership, I tend to agree that generally the culture there is exactly what people say that it is. Most of all, the concern is for those animals. A shelter is supposed to be a place of protection. Instead, I am horrified and stunned by what I have seen.”

Kowalski created an expert panel to advise him, which included several ex AWL employees and ex-volunteers. He also sought outside expert advice.

Meanwhile, AWL did respond to the combined pressure. After 22 years, Linda Estrada was out as executive director.

Dr. Sandra Newbury, known nationwide for her ability as a “fixer” to animal shelters, director of the University of Wisconsin Shelter Medicine program, began to make recommendations. And things began to look up. Newbury was helping hands-on, and she was initially pleased with the progress made.

Diane Spyrka was brought in from the AWL facility in Chicago to act as the interim executive director. And Spyrka is well-respected, if not downright admired.

However, soon enough Newbury walked. There was no fee involved in her work, so obviously it wasn’t a matter of dollars. Newbury did require that she is listened to. Newbury, who has seen it all, did initiate some positive change, but ultimately left in frustration.

“What’s gone on there has been going on for too long and is (expletive) ridiculous,” says Kowalski. “I am grateful the Congressman has gotten involved. I most certainly cannot explain why AWL’s focus has been on using their lawyers to shut people in social media down the best they can, including some members of my panel. Intimidating the public instead of building bridges with the public. Nearly everyone I’ve met sincerely wants to help, but when they offer to lend a hand it is slapped. There’s no trust or transparency. The building codes have been rectified but the animals appear to still be suffering.”

Kowalski concedes being an open intake facility – accepting all animals at their doors – is no easy task. And that today it appears that dogs and cats on the adoption floor are in good shape. But behind-the-scenes, at least what I have witnessed, there’s another story.

What’s more, reportedly, AWL is not renewing their contract with Cook County, which may over-burden other area shelters, including Chicago Animal Care and Control. What’s more, currently a sign on the AWLS door suggests they are refusing cat drop offs – so at this moment no open-intake for cats.

“Lipinski brings a sense of leadership to all this since there’s been so much controversy over jurisdiction,” adds Kowaski. “The hope is now people can finally come together to fix this for the sake of the animals.”

Again – no one wants to see Animal Welfare League

shuttered, but everyone wants and expects appropriate welfare standards, including the five freedoms are adhered to. One more note to the Board, it may not feel like people are in your corner, but actually they are, though turning animals away to force further pressure on other shelters is not helpful. Re-establishing or creating new relationships with rescues would be very helpful. 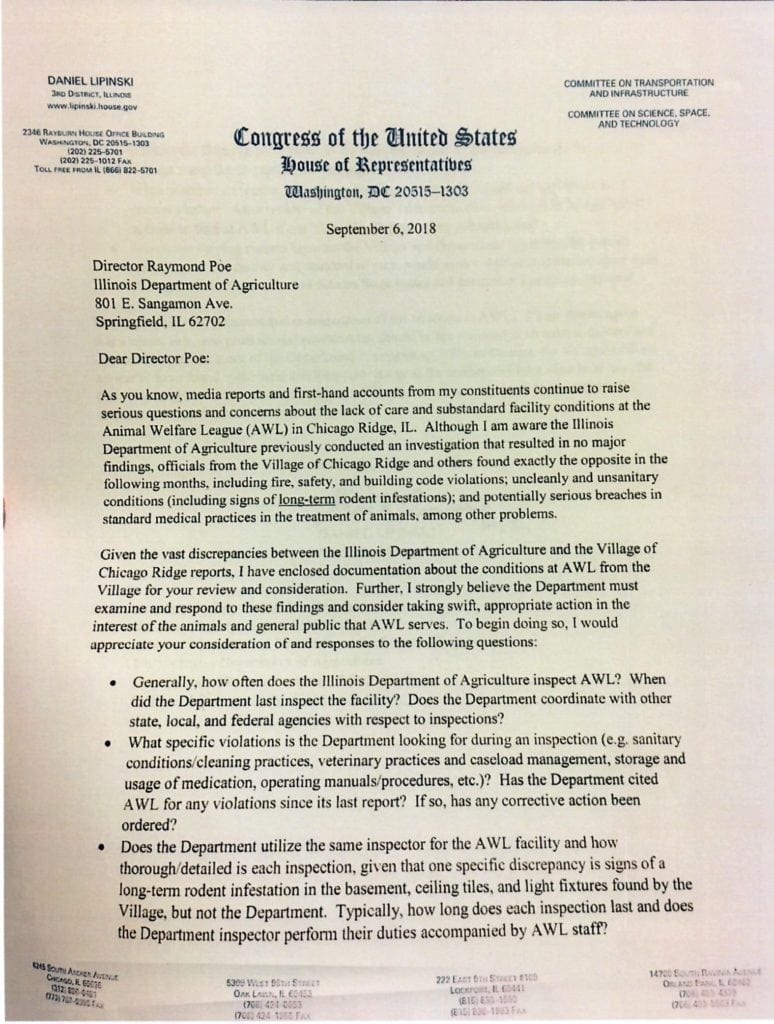 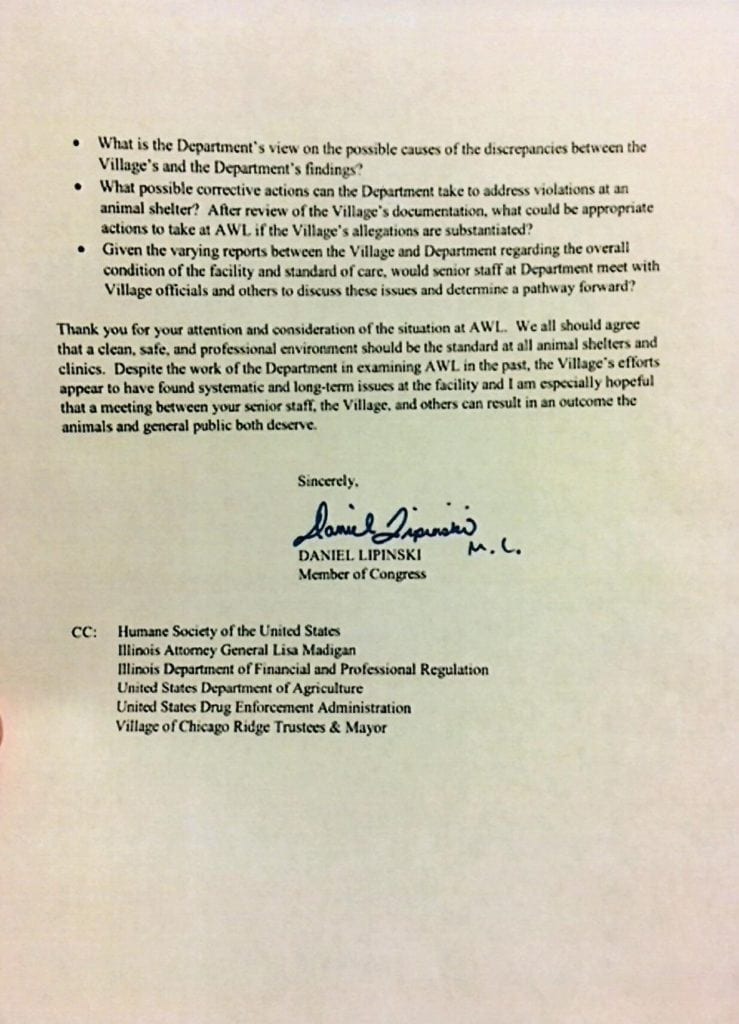