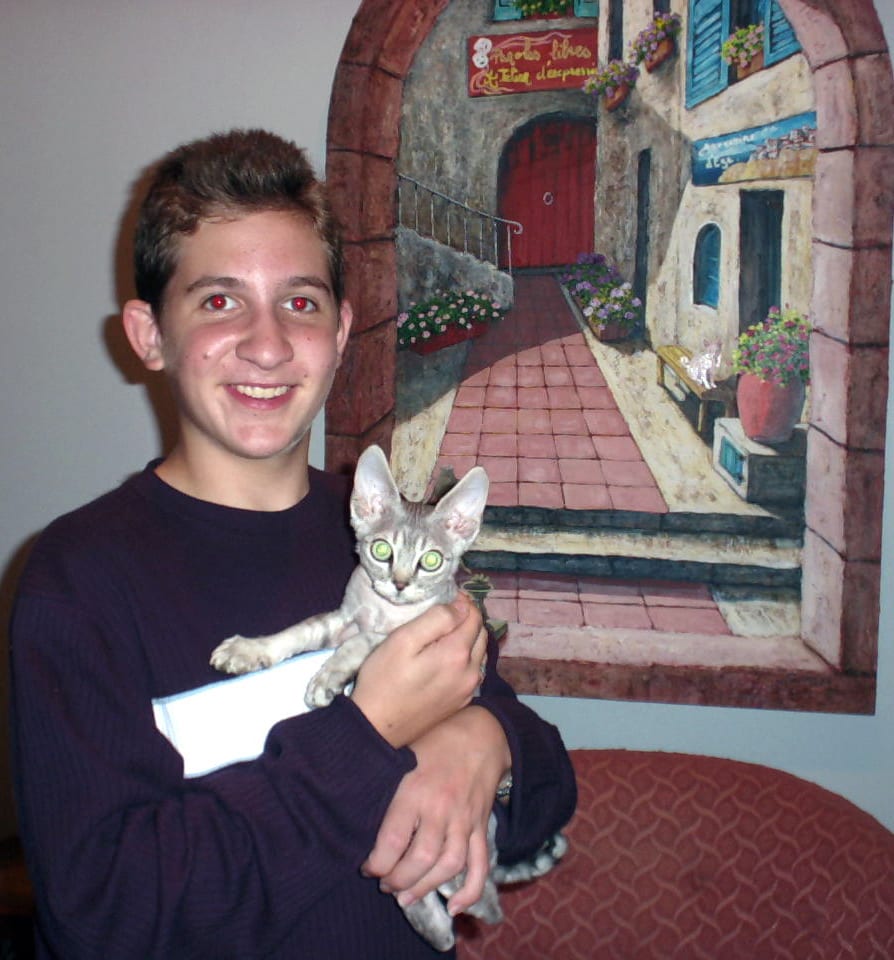 2019 FIP Symposium: PURRsuing FIP and WINNing might be the most significant event in feline health, ever! I realize, that’s a mighty powerful statement to make – but it’s likely true. No matter, for me, this is one of the most important functions I’ve ever been involved with.

I rarely talk about this, but I do remember the exact moment when Dr. Sheldon Rubin called to tell me that Ringo, our new kitty, likely has feline infectious peritonitis or FIP.

I was stunned. “How can this happen to me?” We had only very recently lost a cat, named Ricky, to heart disease (feline hypertrophic cardiomyopathy). Ricky and I were so incredibly bonded, and at the time Ricky was a sort of celebrity for his piano playing prowess – among various other behaviors. Ricky made many national TV appearances.

When Ricky died suddenly, I was inspired to launch the Ricky Fund with the non-profit Winn Feline Foundation to raise money to support funding for studies of heart disease in cats.

It took many months for my wife Robin and I to feel we were emotionally ready to get another cat. Ringo was in our home only around three months when he was diagnosed with FIP.

I knew that Dr. Rubin was right, with Ringo’s big belly filled with fluid. However, Dr. Rubin confirmed the diagnosis by sending the fluid to Dr. James Richards at the Feline Health Center at Cornell.

Desperate to save our “baby,” we were willing to do anything. We tried L-Lysine.

For a minute, a veterinary researcher thought this supplement – typically used for cats with feline herpesvirus  – would support cats with FIP, which is also a virus. It didn’t help a bit.

Ringo lived for only a few more weeks. FIP mostly happens to kittens making this disease – which has always been considered fatal – far more painful to endure.

In 2005, Susan Gingrich came to the Winn Feline Foundation following the death of her kitty, named Bria, to FIP. She wanted to launch the Bria Fund to raise money for FIP studies. While Winn Feline was for many years already been the primary fundraiser for FIP studies, I was hugely supportive. I was moved by Susan’s passion, and to this day I understood that passion in a very personal way.

Susan and a legion of FIP fighters have worked hard to support funding. Among those also working to raise dollars, a group called Zen by Cat, led by Peter Cohen. Along the way, legendary FIP researcher Dr. Niels Pedersen of the University of California-Davis, began his own FIP support system called SOCK FIP.

“But FIP will never be cured in my lifetime,” was a refrain Gingrich, who eventually served for a time on the Winn Feline Board, would sometimes say.

Yet, year after year – Winn Feline persevered, often funding Pedersen, who once told me, “I don’t feel I can retire until I’ve at least pushed open the door to FIP at least a little bit.”

Today, there are drugs (not yet approved for the U.S.) which are curing kittens. Though the drugs aren’t apparently perfect, Pedersen says, “We’ve opened the door to knowledge, and it’s not just open a crack, we’ve kicked it open.”

It’s likely that no researcher on the planet knows more about FIP, which is no small declaration. FIP is a complicated disease. But finally, in 2019, FIP is finally well understood. Pedersen will kick off the Symposium, and speak on two panels.

It’s one of the great honors of my life that with former Winn Feline Executive Director and current Board Member Dr. Vicki Thayer as co-chair of the Winn Feline Foundation education committee, we have organized the largest gathering of experts on FIP ever amassed in one place at one time. Investigators are traveling around the world to partake in PUrrsuing FIP and WINNing at the University of California-Davis, November 16-17.

The Winn Feline Foundation was adamant from the start that this must not a closed event and UC Davis agrees. The Symposium has attracted worldwide recognition, from the World Small Animal Veterinary Association as well as the American Association of Feline Practitioners. Veterinary processionals and veterinary students can attend for continuing education credit. Cat breeders and cat lovers are all welcome. The fee to be there is far lower than typical events of this kind, as UC Davis has bent over backwards to support affordability. In fact, those who can’t attend in person can watch it all live on your computer or phone via a live stream.  Learn more about attending in person or virtually here. In person availability could sell out – so now is the time to make the commitment.

Rather than talking heads lecture, the event will primarily consist of round table discussions. The intent is for the experts to come to a consensus of some type for each round table. And there’s plenty to discuss.

Questions discussed will include:

Geneticist and the individual responsible for nearly all we know about the feline genome, Dr. Leslie Lyons, professor of Comparative Medicine at the Department of Veterinary Medicine and Surgery at the University of Missouri representing World Small Animal Veterinary Association.

Aly Miller, a co-producer and actor in the short award winning film “Aeris,” about a kitty with FIP will speak, and a copy of the movie will be given to all in-person attendees.

Pedersen told me after decades of chasing FIP, this event will mark the turnaround. In a sense, this scientific event is also a celebration of commitment (Pedersen, Gingrich and scores of others) of science over disease.