It’s said that there’s a podcast about everything, but this might be the first podcast in the history of podcasts that describes the five remaining rhinoceros species in detail, and is all about what you can do to help the plight of these beleaguered species by Bowling for Rhinos.

Listen HERE as I am joined by Lincoln Park Zoo keepers Caitlinn O’Brien and Allycia Darst to talk about the senseless murder of these animals for their horns, considered an aphrodisiac or cure for whatever ails you, from arthritis to cancer. But rhino horns do not cure these ailments. They are made up of keratin, just like our own fingernails. So, killing the rhinos and paying a large sum for the powder of pulverized rhino horn will give you exactly what you would get if you chewed and ate your own fingernails.

And the rhinos are disappearing fast. In South Africa alone, at least three rhinos are poached and killed every day. In Java and Sumatra, where two other rhino species live, they are so rare that finding one another to breed can be a challenge, and the genetic diversity is now limited.

Still, it’s not over for the rhinoceros. During this podcast, we talk about how you can help, and why you need to help. The lumbering prehistoric-like rhino is a pivotal species. If the rhino goes, the grass they graze on will overgrow and there will be more fires, which would displace and kill people. Species depend on the rhino to be a part of the food chain. 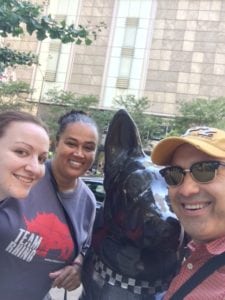 Even dogs want to save rhinos, with Lincoln Park Zoo keepers Caitlinn O’Brien and Allycia Darst

The Lincoln Park Chapter of the American Association of Zoo Keepers Bowling for Rhinos is Tuesday, August 15, starting at 6 p.m. CDT, at Diversey River Bowl, 2211 West Diversey Parkway (at Logan Boulevard).  You can bowl or just hang out, and visit with a room filled with animal lovers. Pizza is included, and amazing items, including trips to Africa, are up for auction.

It’s so sad that a species that has roamed the earth for 50 million years could be wiped off the planet for no reason and we’re responsible.

Bowling FOR Rhinos, though I personally think the event would be more interesting if it were Bowling WITH Rhinos.

Learn more about the event HERE.