For those who haven’t followed the story of Tomi Trancheta and her four coyotes, Tomi offers an update on the lone surviving coyote, named Luna, on my WGN Radio Steve Dale’s Pet World show. 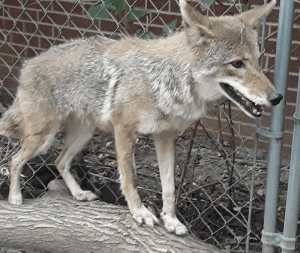 Listen HERE as Tomi and I first explain that he animals, which she had proper licensing and rescued from a very young age, were brutally taken away. Instead of being allowed to go into their crates, they were shot up close with tranquiler guns, dragged into a waiting truck, vaccinated (for no apparent reason) and all because according to the Illinois Department of Natural Resources Tranchita failed to renew a $25 permit. Three of the four elderly coyotes died soon after; likely the trauma play a significant role.

Luna is the one remaining coyote – and she was barely surviving where IDNR placed her. Finally, after many months of negotiating, IDNR allowed her to be transferred to a facility in Indiana, which can appropriately deal with coyotes. Tranchita offers good news regarding her condition. But still, why wouldn’t IDNR allow Luna to return to Tranchita? There is no real reason.

For 13 years the coyotes thrived. There was never any problem whatsoever with Federal or State licensing. Even if Tranchita missed renewing that $25 coyote license, the coyotes had done nothing wrong. How did they deserve to die? If you don’t renew your auto license – as one example, maybe you are fined and can still renew. Others missing the $25 license were allowed to pay late – not her. In any case, miss renewing an auto license and the car isn’t destroyed, as they coyotes were. The animals never escaped or threatened the community – or anything like that.  The  IDNR just wants the story to go away. They must know they’ve done wrong.

If the coyotes still needed confiscating, why do so in such a brutal fashion? Don’t believe me – here’s a video. 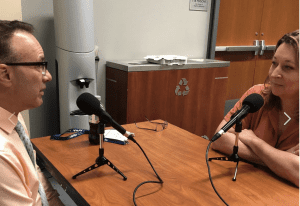 Dr. Melinda Merck is a forensic veterinarian, and we talk here about the link between domestic violence and violence to pets. Where there are pets in these violent homes, up to about 88 percent of the pets have been abused or even killed as a result.

October is National Domestic Violence and Awareness Month – and awareness of this growing problem is important.

So what do you do if you suspect abuse to a pet? It’s important you speak up – not only for the animals, but ultimately protecting people in those homes too.

One resource to learn more and to understand more regarding where to report animal abuse is the National Link Coalition. Also, Purina and Red Rover have partners to create the Purple Leash Project, which helps animals, and therefore people out of domestic violence situations.  After all, nearly 70 percent of people won’t leave a domestic violence situation if they have nowhere to flee with the pet(s).