Can Bats Give You or Your Dog the Flu? 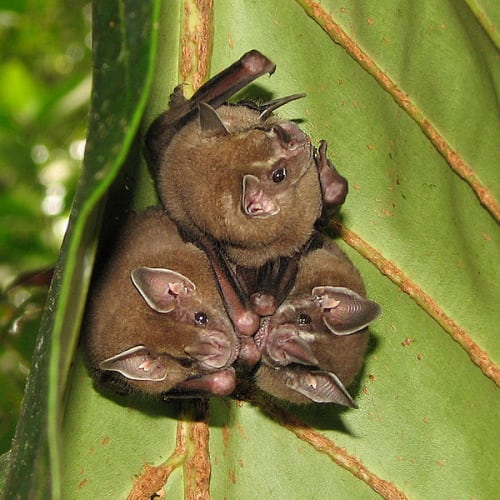 Who wants the flu? According to the Centers for Disease Control (CDC), over 3,000 people die of flu annually as a result of an influenza vius. Because there is no CDC for pets, there’s no way to tell for sure how many dogs die of the canine influenza virus annually, but we know some do. The good news is that the overwhelming number of people or dogs with flu have an awful couple of days and recover just fine, though some people (especially seniors) and some dogs require hospitalization.

The reality is that we don’t live on this planet alone with dogs – other species serve as influenza reservoirs. according to Science Daily.

Avian influenza viruses can cause severe disease and have historically caused several devastating pandemics when introduced into the human population. Therefore, a world-wide surveillance program has been set up to monitor influenza virus activity in birds. Surprisingly, bats are now identified as a potential new source of influenza virus. Genome sequences of influenza A-like viruses were identified in fruit bats in Central and South America.

A team at the Institute for Virology of the Medical Center — University of Freiburg, Germany, together with scientists from Switzerland and the USA, report a break-through in isolating a bat influenza virus by reconstituting fully functional bat influenza viruses in the laboratory.

It was shown that the bat influenza viruses infected not only bat cells but also human and dog cells. A corresponding study was published online on October 24, 2016, in the journal Proceedings of the National Academy of Sciences of the United States of America.

As a side note it’s interesting that people and dogs would be about equally as susceptible (without additional mutations of the virus to affect either species), again demonstrating how much we have in common with dogs.

Bats are natural hosts for several highly pathogenic viruses. Ebola and rabies virus are repeatedly transmitted from bats to humans (and to other species). However, before maligning bats (which many people fear anyway), consider that bats as a group are the number one predator to the one animal responsible for the most human deaths on earth, mosquitoes. Bats also pollinate many plants around the world, and are a key cog in the ecosystem.

While the new observation that human cells can be infected with bat influenza A-like viruses is a hint that these viruses could also potentially be transmitted to humans, there is no evidence for such transmission at this time. And scientists are not surprised at this finding, since it is known that influenza viruses are found in many species, and actually do mutate an jump species. H3N2, a canine influenza, jumped to dogs from an equine influenza virus, as one example.