Memorial Day is more than about picnics. It’s supposed to be about remembering those who have made the ultimate sacrifice for our nation, and celebrating those who fought for our freedom. Soldiers include military working dogs. 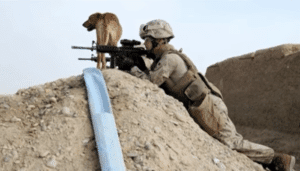 “No one knows how many lives have been saved (by military working dogs) but many thousands, hundreds of thousands since World War II,” says MSgt. John Burnam, author of “A Soldier’s Best Friend.” Today, military working dogs deployed across the U.S. and overseas search for explosives and land mines, search for bad guys, and serve as guard dogs. They protect U.S. military equipment from theft.

Ron Aiello, of the of the non-profit U.S. War Dog Association  estimates that American military working dogs conservatively saved over 10,000 lives in Vietnam, and that number has likely at least tripled in Iraq and Afghanistan. 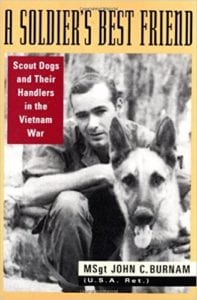 Aiello was himself in Vietnam when his partner, a German Shepherd named Stormy, alerted him to impending danger.

Aiello heeded the warning and moments later, a sniper opened fire, just missing him. “My dog saved my life more than once, and most handlers say the same thing,” Aiello says.

Burnam also served in Vietnam. His dog was a German Shepherd named Clipper. “One time, we were leading a patrol in an area we had previous combat experience in,” he says. “This was an open space with rows of rubber trees. We spread out in a wide formation. Then all the sudden a guy to my right gets hit and badly hurt. There were explosives with trip wires booby-trapped all around. We had nowhere to go but forward; it was our only choice. Clipper guided us through this area and past at least five booby traps. He saved my life and others on that day.”

Military Working Dogs in Movies to Watch at Home 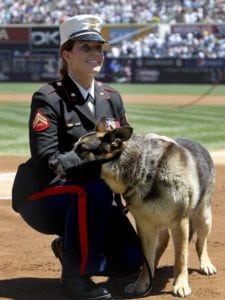 Megan Leavey is a movie that tells the story of the soldier and her dog Rex. Both were deployed to Fallujah for seven months and then to Ramadi in 2006. In all, they served for nearly three years at each other’s side and completed more than 100 missions together. During that time Rex identified hundreds of explosives and saved countless lives.

The real Megan Leavey honored at Yankee Stadium with Rex

It was during the second deployment that Leavey and Rex were both injured by a makeshift explosive device which reportedly was targeted at them specifically. 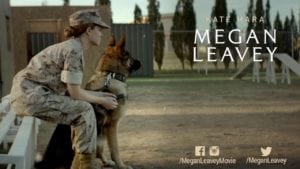 Following recovery from her injuries, Leavey retired from the military and sought to adopt Rex. You’d think that would be a no-brainer. However, the military never considered the bond that formed between Megan and Rex, and Rex was essentially considered equipment – they sent him right back into action.

What’s changing – but slowly – is the military honoring the bond handlers develop with their dogs. Happily, dogs aren’t left behind to starve any longer (as was the case following the Vietnam war), but handlers should be allowed to retire with their dogs. In this instance, according to the movie, Rex could be reactive – so it was thought a military life was more well suited for him. However, when Megan finally did adopt the dog who saved her own life and so many other lives, he turned out to be just a normal pet who liked to play.

The movie is, in part, based on the book, Sergeant Rex: The Unbreakable Bond Between a Marine and His Military Working Dog by Mike Dowling, who was another Rex handler. Kate Mara plays Megan; also in the film are Edie Falco, Bradley Whitfield and Common. 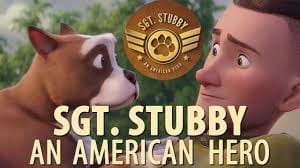 Sgt. Stubby: An American Hero, is an animated feature (but clearly for adults too) telling the story of the first and still most celebrated military working dog ever, named Sgt. Stubby.

After suffering from the effects of being gassed himself, the odds of Sgt. Stubby recovering weren’t so great – but he did manage to bounce back and when he recuperated, his heightened sensitivity gave him the ability to detect incoming attacks and alert his handler Robert Conroy. 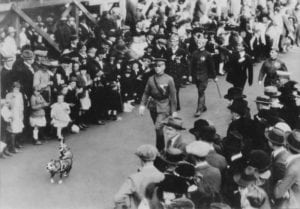 Real Stg. Stubby was a War hero honored by Presidents and celebrated in parades

When they first met, Conroy was a private in training and the dog was a street dog – but they quickly bonded. Sgt. Stubby was able to find wounded soldiers on the battlefield. After nabbing a German spy in the Yankee Division’s trenches, Stubby was promoted to the rank of Sergeant, the first dog to be promoted in combat.

Yes, these dogs are loyal – while that word is a good one – it doesn’t do the relationship many of us have had with a dog justice. This movie is really about that bond, and about friendship on so many levels. Of course, it’s also about the heroics of one very special dog.

And the movie is so refreshing – about a hero, a real hero who doesn’t ask for anything back except for friendship.

Thank you to all who have served, two legs and four.