What Has Cesar Millan Learned? 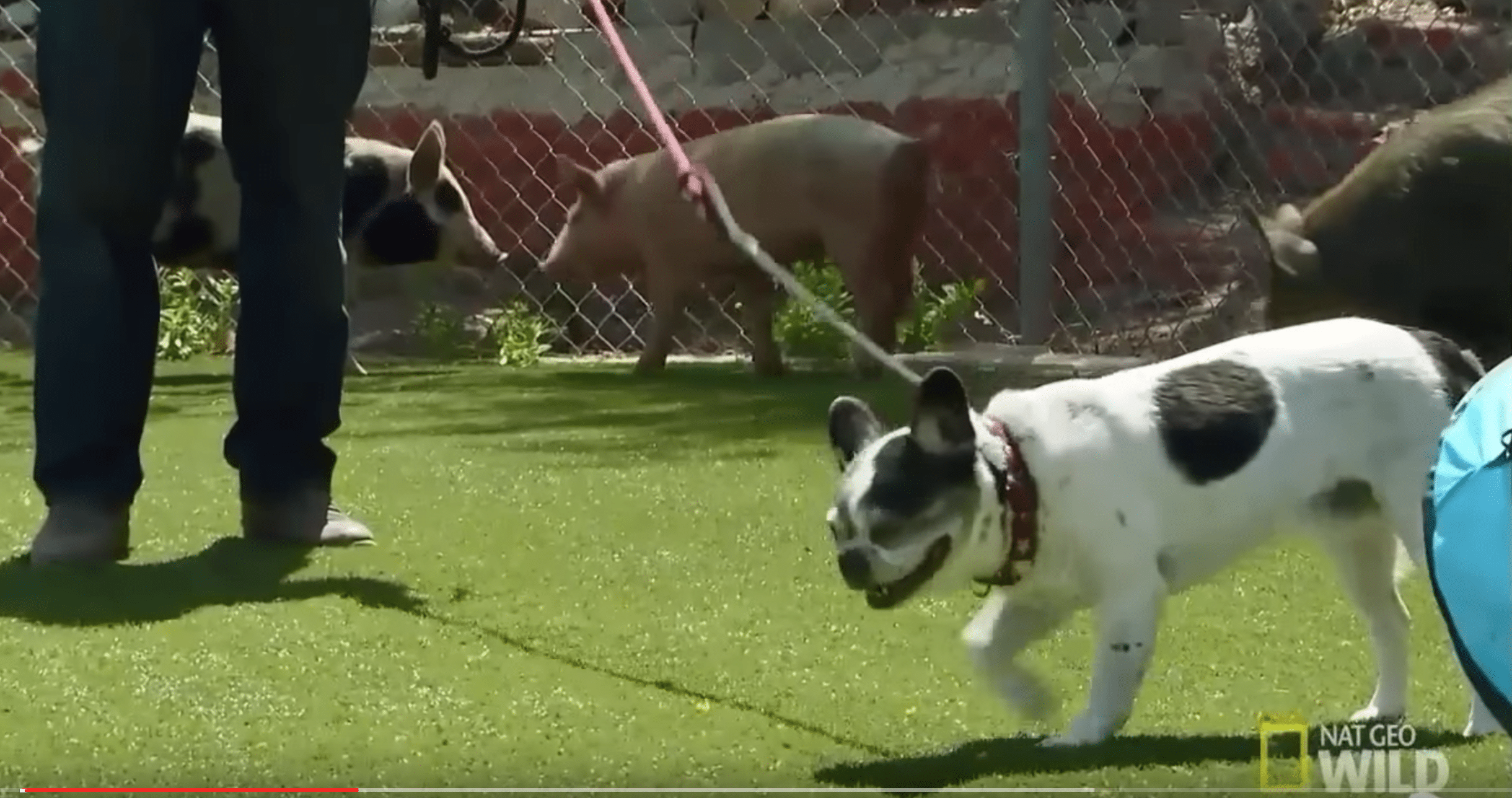 I am truly saddened by the episode which Millan allowed (and some might argue encouraged) a dog named Simon to attack a pig. Millan is now being investigated for animal cruelty as a result. 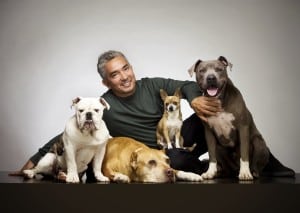 My “relationship” with Cesar Millan dates back to 2006, I was one of the first (arguably the very first) to use a public platform to criticize this guy who people in the millions thought had a new and uniquely insightful understanding of dogs and dealing with problem behavior. The fact is that he uses antiquated and made-up methods.

In my national newspaper columns, I called the noted dog whisperer “the dog screamer,” contending his methods were hardly restrained. And in fact, by turning dogs over in alpha rolls, forcing dogs to “face their fears,” or even getting physical with them –  he actually screams his intent. Thee’s nothing subtle about his methods.

Most of the email at that time was pro-Millan. I received countless email calling me a racist, saying that I was jealous (of his success?), calling me ignorant about dogs, and I was even threatened – at one point by the National Geographic Channel. I concede that was intimidating.

Still, I stood firmly on my position. 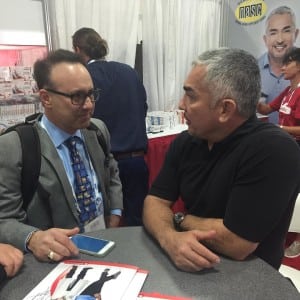 I recently bumped into Millan at the Western Veterinary Conference, and asked him about the ‘pig incident,’ which I then had not seen and knew very little about. He said, “The entire thing was exaggerated” and that he used positive reinforcement. You can decide for yourself.

When I visit the Nat Geo website to see the episode with Simon the dog and the pigs , the clip was removed.

Thank goodness for Vicki Dawne Flyball’s YouTube page, where the episode with the pigs lives – with added commentary, and you can watch.

It’s important to understand that Millan was working with a dog who has a history of killing pigs.

Millan says his goal is to give the dog, Simon, a new “positive memory” of the pigs, which actually makes a lot of sense.

Instead of using a muzzle, Millan chooses a long line. It’s not quite as safe, but appropriately using that long line can work out nicely. However, what Millan totally misses is any effort whatsoever to actually offer that “positive memory” he spoke of, as there is no attempt to desensitize and counter-condition the dog to the pigs. It’s a basic behavioral training technique which would offer that “positive memory.”

What Millan might have done with Simon on-leash, was to start off at a distance where he is not exhibiting any signs of stress around the pigs, and to reinforce that relaxed attitude with treats (and praise)…And VERY gradually get closer and closer to the pigs. The trick is also to do this without forcing the pigs to become anxious, which would be unfair to the pigs and perhaps their excitement would incite Simon.

Millan made no attempt to do any of this. He maintained that Simon was relaxed (when by my observation he was not), and didn’t do a thing except letting him wander. 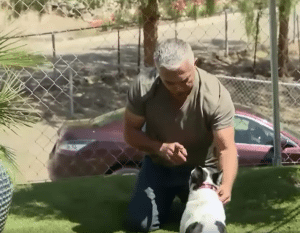 A part of my issue with Millan has always been that he “needs” to witness the problem behaviors (on-camera), wanting to incite behaviors in order to solve them. I understand it’s TV and such scenes make “good TV,” but I’ve told producers “no.” Maybe that is why I don’t do more TV – but then so-be-it.

By all accounts the pigs appeared to be tolerating Simon. So a member of the production team, or someone then pushed Simon to his limits and beyond by forcing the pig to squeal. Or at least, to my eyes, this is what happens.

And sure enough, Simon – who had been inexplicably taken off leash – attacks. This should have come as no surprise to Millan because no work was done to offer this “positive memory.” Given Simon’s history, I can’t answer why Millan thought he would respond with a bouquet of roses.

What follows Simon’s initial attack of the pigs would be funny to any dog training professional or behavior consultant if it wasn’t so sad. Millan chases Simon, and twice attempts an alpha roll (to roll the dog on to his back to demonstrate – not so sure what…Millan says to show “dominance”) and Millan uses his patented “tssskk” sound to reprimand the dog. All all of this AFTER the dog attacks the poor pig. I truly don’t get how a professional might think behavior can be altered by with these techniques.

I will also comment on what hasn’t been shared as often in social – the additional clip from the same episode which somehow National Geographic appears proud of.

In this segment, Millan begins, “Well, last time you saw Simon with the pig was not a very good scene.”

Despite the suggestion that Simon is “comfortable,” I can indicate repeated signs of distress, including the pulled back face (like a grimace), stress panting, and doing anything he can to avoid direct eye contact with the pigs.

At 1:07 Millan forces Simon (by sitting on the leash) to be within a few feet of the pigs. In my personal opinion, this technique has inhumane, though nothing physical was done to Simon. 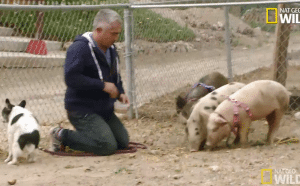 At 1:15 Millan does support Simon, saying he’s a good boy. It’s the first effort through any of this that I witnessed any attempt to positively reinforce. This is a good thing. However, with Millan sitting on the leash, Simon has no choice. 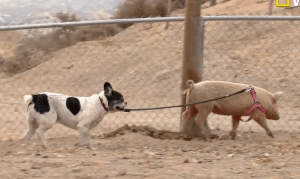 So the pig walks the dog and solves the problem?

Millan then tempts fate – as he ties Simon to the very pig he initially attacked. I am no expert on pig behavior but it seems that the pig was afraid, and attempting to get away from the dog who bit him the day before (what a surprise). I question, for starters, if this technique – even if it doesn’t go awry is in the best interest of the pig.

The idea, according to Millan, is to make Simon a follower and not an aggressor and as a result to create a new association to the pigs. I have no idea what this means.

I believe this was a case of amazing luck. Simon was just too stressed out to attack the pig, or maybe just didn’t because he didn’t. But why in the world would Millan do this? The risk seemed enormous. In the end, it worked out.

I already received some email asking about my “complaining,” suggesting that the pigs don’t really matter, and asking if I am a vegan (which I am not). To me, what I personally eat or not is irrelevant. Welfare of pigs does matter, even if they are food production animals, and rightly so that is the law.

Los Angeles County Department of Animal Care and Control is looking into complaints originating with an episode of Millan’s Nat Geo Wild series, “Cesar 911,” Aaron Reyes, the agency’s deputy director, confirmed to CNN. “In the video, someone has taken a pig and holds its rear leg in the air while another animal, a dog, runs to attack it,” Reyes said. “That, in and of itself, is a penal code animal cruelty violation in the state of California, but the office still needs to investigate the circumstances.”

National Geographic is standing by Millan, as this is their statement:
“Cesar Millan has dedicated his life to helping dogs and to showing how even the most difficult ‘problem dog’ can be rescued and rehabilitated. In a recent episode of the Nat Geo Wild series Cesar 911, Cesar works with an aggressive French bulldog/terrier mix named Simon, who has a history of attacking other animals, including his owner’s pet pot-bellied pigs. A short clip from the episode was shared online and showed Simon chasing a pig and nipping its ear, causing the ear to bleed. The clip caused some concern for viewers who did not see or understand the full context of the encounter.
“We have included an additional clip from the same episode (which I showed on this page) to provide missing context. Cesar has created a safe and controlled environment at his Dog Psychology Center (DPC) in California in which to rehabilitate some of the most extreme — or ‘red zone’ — cases of dog aggression, such as Simon’s. It is important to clarify that Cesar took precautions, such as putting Simon on a long lead to assess his behavior, before making initial corrections and removing the leash. The pig that was nipped by Simon was tended to immediately afterward, healed quickly and showed no lasting signs of distress. As the additional clip reveals, Cesar and his animal pack effectively helped Simon to overcome his aggressive behavior toward other animals; as a result, Simon did not have to be separated from his owner or euthanized.
Cesar Millan is and will continue to fully cooperate with authorities in ‎any investigation. He is confident that the investigation will show there was no wrong doing.”

For those who say, “we’re all entitled to mistakes,” I absolutely agree. However, Millan has been on national TV now for many years now and has made many mistakes, seemingly without learning from them. Many notable trainers and dog behavior consultants have offered Millan opportunities to learn how to adjust his techniques to a more positive reinforcing approach.

I admire Millan’s ability as a TV communicator, and he clearly has “a way” with dogs which I admire. I agree and support his position on treating pit bull-type dogs like all other dogs. And he seems like a nice enough guy to chat with, who at some level truly cares about dogs. 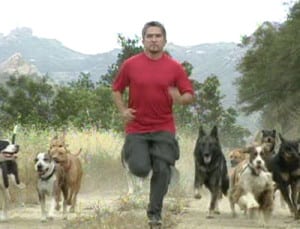 I was on the Board of Directors of the American Humane Association – the group responsible for pushing for the warnings you see on-screen on his previous for National Geographic program which essentially say ‘don’t try this at home.’  The hope was that if the network had to warn about his methods, people wouldn’t try them at home because potentially they may be dangerous.

With David Geis, then the president of Board of Directors of American Humane, several years back, we flew out to California to meet with Millan and members of his team to urge him to adjust his terminology and approach. The hope was to place an American Humane observer on Millan’s set, and in return potentially suggest a No Animals Were Harmed statement in the final rolling credits. Millan and his group then refused. However, he did agree to moderate some of his terminology. 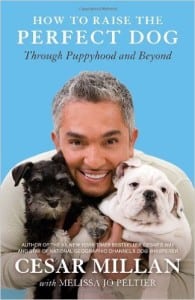 Millan’s “ghost writer” at that time totally ‘got it,’ and for the Millan book she was working on, people like Dr. Ian Dunbar and Karen Pryor were interviewed.

Millan did seem, for a time, to moderate his techniques some. In truth, since he moved to Nat Geo Wild, I haven’t paid much attention – ‘till now.

In truth, the second video was – in some ways – was no better than the first. And Millan has said publicly that he sees no problem with this technique, which he’s used many times to “rehabilitate” dogs who has “issues” with other animals.

By the way, a company called Vetz Petz was responsible for bringing Millan into the Western Veterinary Conference. Hundreds of presumably educated veterinary professionals lined up to see Millan, which I don’t quite understand. Though, I also saw Cesar there, and chatted amiably for a couple of minutes – it was a matter of being cordial, and and saying “hi.” I wish I had seen the pig episode at that time. I was actually in the exhibit hall to see the largest Great Dane at the Ceva booth.

A representative from Vetz Petz told a contingent of veterinary behaviorists who turned up after Millan departed to “educate” the company about Millan that I was the only one to complain. I sure hope that was not the case.

I take no joy in writing this piece….but what happened with that pig episode was down right inexcusable. I don’t understand how the producers decided to air the piece.