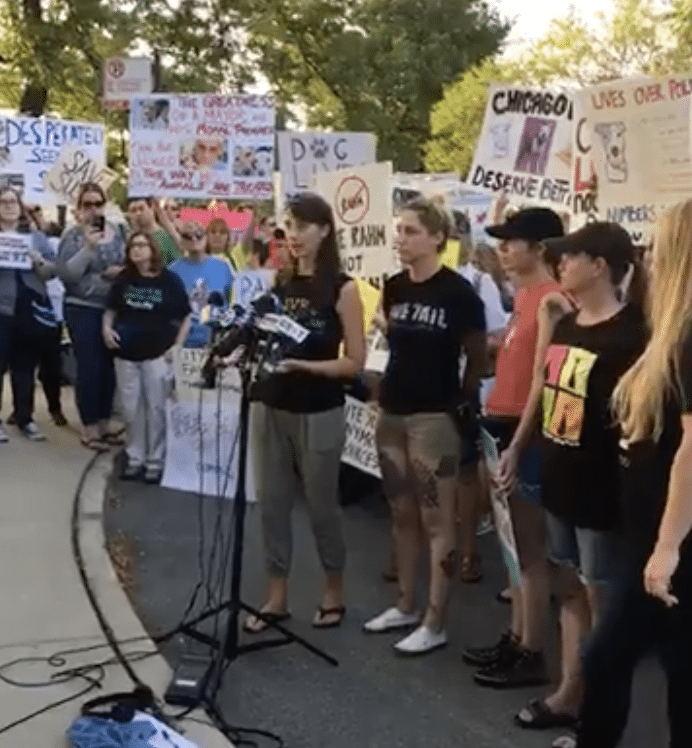 If Russell’s primary mission was to save animals, she was doing just that. Live release numbers in just over two years swung from just under 70 percent for cats and just 70 percent for dogs to today’s numbers into “no kill” territory at over 90 percent. And she achieved this with fewer resources than city’s smaller than Chicago.

“Iffy” dogs and cats that might likely have been previously euthanized were given a real chance for the first time, and she was the first director to reasonably use terms like “treatable and adoptable.”

By all accounts morale of the staff improved, as did enthusiasm of a volunteer program (made challenging by the city), still she recruited volunteers. She also established relations with many new rescue partners.

When the Mayor’s office said don’t do it – she sometimes ignored those edicts, as saving animal lives was paramount. This is the underlying reason why she was fired. Russell didn’t play politics with lives, but not taking directives from the Mayor’s office –  mandates based on perceived public perceptions rather than having any inkling or interest in saving lives or respect for the Department’s expertise. What’s more, the City didn’t like it when Russell referred to dogs that look like pit bulls as “Chicago dogs.” Russell was attempting “marketing 101” tactics to soften their image. The City, apparently thinking poorly of dogs that look like pitties, didn’t appreciate the connection.

According to Alderman Nick Sposato (38th Ward), the Mayor’s office actually wanted more animals euthanized (presumably for fear of adopting out ‘dangerous dogs,’ which was not something that was occurring).

On WGN radio Ald. Sposato and I suggested that the Mayor can’t keep tabs on everything and may have been misinformed, attempting to offer an opening to change his mind.  I KNOW other aldermen also urged the Mayor to re-hire Russell. And most importantly, so did thousands of Chicagoans. The word back, “It’s a done deal: She’s out.” And the explanation that finally came for her firing isn’t consistent with fact.

Here are two FACTS (as far as I know) not previously public:

The Mayor never had enough interest in Chicago’s Animal Care and Control Facility on South Western Avenue to even once visit in his years in office, and despite repeatedly asking to meet with her boss, the Mayor had no interest in meeting with Russell.  Presumably, he’s met with other department heads – but the Executive Director of Chicago Animal Care and Control is apparently unimportant.

Former Democratic Governor Pat Quinn has a very long history of supporting companion animal bills, including working with me (and others) to by-law bar breed bans in Illinois and a law to insure shelter pets are routinely scanned not once but twice for a microchip, and if dogfighters are found guilty of hosting events near a school, playground or human daycare – perpetrators may be guilty of an enhanced felony, and he worked closely with Judy Baar Topinka, a Republican, on her her adoption initiatives.

Quinn created a petition to support term limits for the Chicago Mayor. If this referendum gets on the ballet, and then passes, Rahm Emanuel can no longer hurt animals by making poor decisions involving Chicago Animal Care and Control, as he then could not run for re-election. At the very least you’ll send a message that he obviously doesn’t comprehend or care about – that all lives are important.

For me this isn’t about politics as much as treatment of our orphaned animals. I also believe that if animals are treated without heart, so are people.

Simply print out the Petition HERE. If only you sign it, that’s ok. If you can get friends and relatives to do so even better. And then snail mail back by August 6.