Horses have just had their day in Chicago. After years of wrangling, even without debate, City Council is pulling the reins on Chicago’s horse-drawn carriage industry, effectively banning them from operating in the city starting next year. This is a huge victory for the welfare of horses, led by Jodie Wiederkehr, executive director of  Chicago Alliance for Animals,

Along the way many ups and downs. 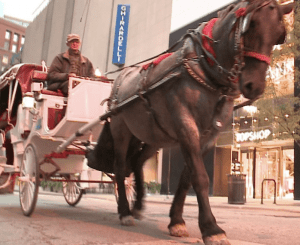 Chicago Alliance for Animals has demonstrated that horses have been continually overworked, even up to 10 hours at a time. That’s well beyond what the current Chicago ordinance or even common sense allows. There are instance of horse working not only too many hours, but in hot weather and even without a water bucket.

“The problem is that these alleged offenses go on all the time,” Wiederkehr has told me on my WGN Radio show. and there are videos to demonstrate this.

Votes have been delayed on this topic for various reasons, some political and most recently due to the pandemic.

Horse-drawn carriage rides along the Magnificent Mile, and other parts of downtown and the Near North Side are naturally popular among tourists but people are blissfully unaware of abuses.

Alderman Brian Hopkins (2nd) in February said the city issues hundreds of violations every year for carriage operations that violate rules regarding safety and animal care, rules that the industry had previously helped to create in the first place.

Alderman. Brendan Reilly (42nd) agrees, and last month said the city has more pressing priorities than to have to issue hundreds of citations every year for an industry that brings in only about $15,000 in annual revenue from licensing fees and taxes. “To be tying up the Department of Business Affairs and Consumer Protection with hundreds of complaints every season because the industry refuses to comply with the law, I’m sorry, we have given you lots of room to operate and to shape up, and you’ve failed miserably,” he said.

Dr. Denis French, a veterinarian and vice president of the Horseman’s Council of Illinois, failed in his efforts to convince aldermen to vote against the ban, stating carriage companies are regularly inspected, and horses are given regular veterinary check-ups. He also disputed claims of animal cruelty.

This story goes back to 2014, when Ald. Ed Burke (14th) proposed banning horse-drawn carriages saying they’re a traffic hazard, a nuisance, and are cruel to animals. 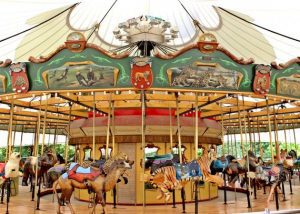 These kinds of horses are more humane

Chicago is not the only city where carriage horses have been the subject of controversy. As Chicago’s proposal got mired in politics, Salt Lake City, UT; Biloxi, MS; Camden, NJ; Key West, Palm Beach, Pompano Beach, and Treasure Island, FL have all banned horse-drawn carriages.

In 2013, in New York City, Mayor Bill de Blasio pledged to replace the carriages with electric old-time style cars that would still appeal to tourists, a brilliant idea. But de Blasio later backed down, instead supporting a reduction to the number of carriage horses operating in Central Park and using public funds to move horse stables to a refurbished stable within the park. And New York City also approved a rule forbidding horse-drawn carriages from allowing people to board in the street.

Horse-drawn carriage drivers are not Uber drivers, and horses aren’t cars – they’re living breathing and feeling modes of transportation.  Perhaps, de Blasio’s idea can be reconsidered for New York and Chicago. So for right now, visit the Lincoln Park Zoo and enjoy a ride on a vintage horse (and wild animal) carousel, once the zoo re-opens.