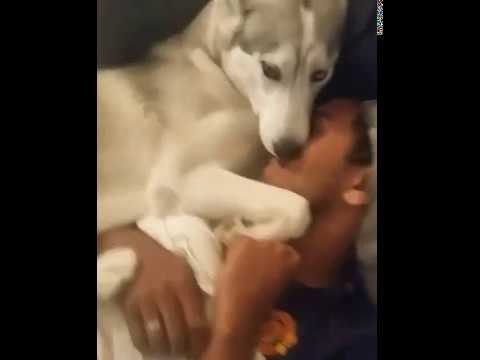 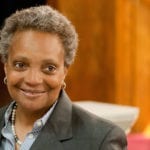 Listen HERE to my Steve Dale’s Pet World WGN radio show where eventually, Chicago Mayoral candidate Lori Lightfoot appears. I ask her why she cares about animal welfare. And what she would do, if Mayor, regarding animal welfare We also discuss Chicago Animal Care and Control, and support spay/neuter and perhaps find ways to prevent the human animal bond from fracturing in the first place (so pets are given up to the shelter).  And she agrees that pets do help to build community.

I read a text about homeless people who ask for money with a puppy or even a kitten at their side. Should we be giving these people money? Indeed, I have an answer. 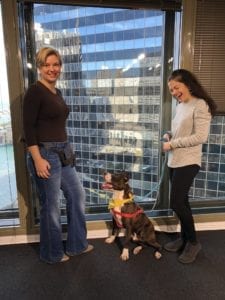 Quirky with Kelley Gandurski and Jenny Schlueter of CACC

I make another pitch for Quirky, who we tried to adopt on the WGN radio Steve Cochran Show. I’m unsure why we can’t get this dog adopted.

Quirky’s been at Chicago Animal Care and Control for over four months, far too long.

Featured images on this page with WGN program manager Stephanie Tichenor as Quirky visited her office and asked for an air shift on the weekend. Quirky responded to love by literally rolling over with joy for Stephanie and lots and lots of employees. He is a total fun loving dog, a mix called a pit bull,  But we’ve adopted similar looking dogs before, even one with three legs. Quirky is about six-years old, but he still has tons of energy and lives to party. Please help us to find Quirky a forever home.

From today though November 18, adoptions at CACC celebrate Petsgiving, which means FEES ARE WAIVED for Quirky and all pets six months and older and for all adult bonded pairs. 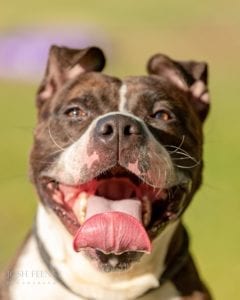 ➤Find an updated list of adoptable pets at
petharbor.com/Chicago
➤Adoption requirements: bit.ly/adoptcacc. You must be 18 years or older. Bring photo ID and a bill/lease with your address.
Renters: A lease or landlord’s permission required.
All family members must meet the pet of your choice, and I hope that is Quirky.

The U.S. Veteran’s Association has nothing to say about service dogs for veterans returning from combat with PTSD. Despite what the VA suggests, there is some science – which I write about – not to mention thousands of anecdotal instances where service dogs make an enormous difference. You can effectively argue that service dogs even save lives, and absolutely improve the quality of life for veterans with PTSD. Read my story about this topic. 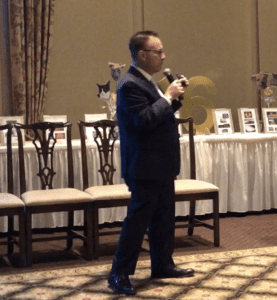 Speaking at a benefit for Heartland Animal Shelter

I also thank the Heartland Animal Shelter, as I was their guest speaker last week. And it’s thrilling to me that they raised more $$ than they previously ever have.

In the recent midterm elections, Florida voters decisively voted to shut down all Greyhound racing in the state. No longer will the approximately 7,000 Greyhounds in the state be confined to small wire cages or allegedly and according to media reports given dangerous drugs to enhance their performance. Dogs also won’t incur often serious injuries as a result racing.

True enough that’s a lot of dogs who will be in need of homes. But this doesn’t have to happen to tomorrow – but the tracks don’t close until 2020. Still, Greyhound rescues will be very busy.