Cities Banning Sales of Dogs and Cats (and Rabbits) at Pet Stores, Even During Pandemic

While everything has been going on regarding COVID-19, several communities around the country have without fanfare  banned the sales of dogs/cats sold at pet stores. Here are eight communities that from the start of the pandemic also banned these pet store sales.

Council members in Olympia, WA voted unanimously to approve an ordinance to ban the sales of dogs and cats at pet stores in late February. In some places, organized veterinary medicine has opposed these sorts of ordinances which is downright bizarre and unfortunate. In this instance, a veterinarian, council member Dr Lisa Parshley, who is specializes in internal medicine and has a special interest in oncology/co-owner of Olympia Veterinary Cancer Center, led the charge to create the ban. 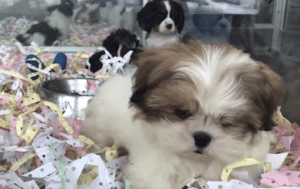 Bans like these are important because of where dogs, cats (also rabbits) that are sold at pet stores are sourced, as responsible breeders never sell to pet stores. These animals sold at pet stores are from mass producers, including puppy mills. This is not to be confused with pet stores that adopt animals from legitimate local shelters and rescues, which should be celebrated.

Some local veterinary associations actually oppose such these bans and they are totally out of touch with their membership. Veterinary professionals have not committed their lives to help animals and simultaneously support puppy mills.

That’s why veterinary technicians and veterinarians launched Veterinary Professionals Against Puppy Mills; they don’t agree that the associations are representing them appropriately or representing the best interests of dogs, cats and rabbits that are sold at pet stores. The mission of this non-profit is to support bans of sales of dogs, cats and rabbits at pet stores, and to help to educate the public about where to get their pets.

On April 27, Evanston and Willowbrook IL, both located just outside Chicago, quietly banned the sales of dogs, cats and also rabbits at pet stores in their respective communities. Quietly only because the news was focused COVID-19 information.

The name of the Evanston Corporation Council, regarding the Evanston ordinance, is Kelly Gandurski, former executive director of Chicago Animal Care and Control; she clearly understands the problem. Also, Red Door Animal Shelter, located on Chicago’s north side, needed to see this ordinance happen in Evanston. Red Door has been inundated with bunnies from people who made impulsive purchases, but had no idea what having a rabbit is like.

With over 350 cities, many counties and three states banning sales of dogs, cats and often rabbits at pet stores, the momentum and public sentiment is obvious much to the chagrin and big bucks of the American Kennel Club and Pet Industry Joint Advisory Council who continue to fight these bans.