But first, news guy Dave Schwanee on how Paul Lisnek (WGN-TV, CLTV) was there for the start of the guy who was honored by Earth Day.

Check out this story I wrote regarding my view of how Earth Day is truly about science, not politics. 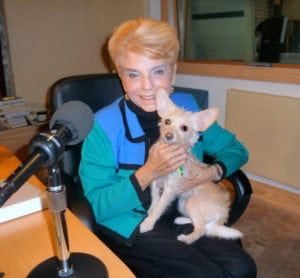 Comptroller’s Critters pet adoption program is being resurrected. It was a program started by Mendoza’s predecessor, the late Judy Baar Topinka. Because of Judy’s vision, many animals were given exposure via her website, and adopted from shelters all over the state. 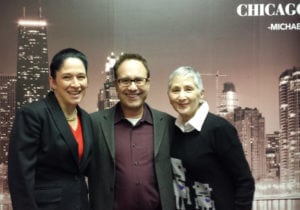 With Mendoza and Cari Meyers, founder of the Puppy Mill Project

We talked about how many shelters, including Chicago Animal Care and Control, are doing so much better than when Topinka first began the pet adoption site. The more shelters, the better:  If you are a legit shelter or rescue, there is no downside in joining what amounts to a site similar to the likes of Petfinder. If you’re interested, contact charles.hagopian@illinoiscomptroller.gov.

Mendoza helped to orchestrate the Chicago ordinance that prevents dogs, cats, and rabbits from being sold at pet stores. More than 200 cities across the U.S. and Canada have similar laws. The pet industry doesn’t like that, so they’re trying to pass laws that would turn back these restrictions on what pet stores can sell and prevent future laws limiting pet store sales. These laws appear supportive of pets, when, in fact, they’re supportive of puppy mills! In Georgia and Tennessee, they turned back these proposals swiftly, but in Illinois—as we discuss—a proposal sits in a State Senate Committee. Mendoza says, “We will do whatever we need to do to kill that bill.” 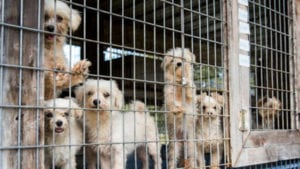 Why we fight puppy mills

The Puppy Mill Project’s “Mothers In the Mill” benefit will be Saturday, May 13, at Moonlight Studios (1446 W. Kinzie Street), at 7 p.m. There will be plenty of food (buffet style) and an open bar. Chicago’s Out of Control band will perform, and Paul Lisnek emcees. Tickets are available HERE ($125 in advance, $150 at the door).

And finally, if you live in Illinois, you or members of your family might have money that’s just waiting for you to claim it from the offices of the Illinois State Treasurer. It’s called Illinois iCash website. It’s worth checking out this website; you might have money waiting to be collected!