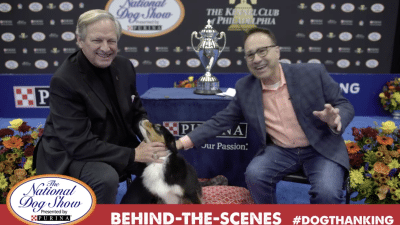 David Frei was inducted into the Dog Writers Association of America Hall of Fame Saturday, February 10, in New York City. That honor is entirely deserved for the best ambassador dogs have had since 1990. 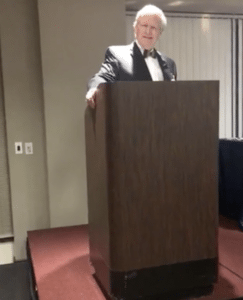 It was in 1990 that David stepped into the role of Westminster Dog Show announcer, which has continued for 27 years. With broadcast partners like Joe Garagiola, Lester Holt, Mary Carillo, and John O’Hurley, its no coincidence that the TV ratings only went in one direction, and that was up.

Since 2002, he has been the voice of the National Dog Show Presented by Purina, with a record more than 25 million human eyeballs watching in 2017 (no one is certain how many dogs were viewing). He’s also the voice at the newly established Beverly Hills Dog Show.

Frei is a part of what makes any dog show established. If David Frei isn’t at the mic, the dog show may not be worth watching. Frei is undeniably the best ever at announcing dog shows on TV. The filmmakers of Best in Show must have agreed, as they spoofed him.

Having participated myself in therapy dog work, we have often talked both privately and together on the radio about the benefits of dogs, and how a dog can light up a person’s day or even potentially change a life, which is something we’ve both witnessed. On HouseSmarts TV, I did this segment with David about his therapy dog work at that time.

And, while we both appreciate all dogs, we share a special fondness for the Brittany Spaniels.

There are some people who you just click with, and David is one of those people for me. I really wanted to surprise David and show up at the dinner during which he was inducted into the Hall of Fame, but circumstances kept me away. 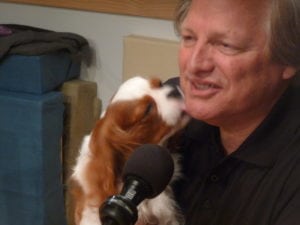 Catching Angel and David on the radio with me

In our industry, real friends may be fickle, but there’s nothing fickle about David. When loyalty seems to have been tossed out the window throughout much of America, he is as loyal as those dogs he talks about.

My favorite David Frei story illustrates the man. And I highly doubt David will recall. At Madison Square Garden in New York City, we were in the press room chatting during the Westminster Kennel Club Dog Show. I was interviewing David for a print story. Out of the corner of his eye, he saw an older woman struggling with a walker to enter the room. He was in the middle of a sentence when he said “wait” and walked all the way across the rather large room to help this woman get through the door. It was a simple gesture, perhaps, but it’s one that illustrates what David is all about.

Being America’s “dog guy,” he has appeared many times on network TV, usually with a Best in Show winner, including the Today Show, NBC Nightly News, Good Morning America, Fox & Friends, The View, Martha Stewart, and more. Dogs have taken him to the White House for a visit with the president, for a ride on a float in the Macy’s Thanksgiving Day Parade, to ring the opening bell at the New York Stock Exchange, to throw out the first pitch at two major league baseball games, to a role on HBO’s Sex and the City, and even to an appearance as a pastry judge on the Food Network’s Best In Show competition.

A breeder-owner-handler and judge in the world of purebred dogs for more than 40 years, he has enjoyed much competitive success with his Afghan Hounds, Brittanys, and Cavalier King Charles Spaniel. His dog, Ch. Stormhill’s Who’s Zoomin’ Who, was the top Afghan Hound in the country in 1989 and retired as the top-winning female in the history of the breed. As a judge, he has officiated at shows in the U.S., Canada, Australia, Denmark, and China.

Petside.com named him the Pet Person of the Year in 2011, and in 2015, Dog Fancy magazine, in its final issue, included him in a retrospective “45 People Who Changed the Dog World.”

His contributions to the dog world are special; moreover, he’s a special guy.