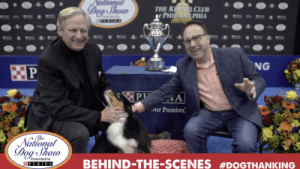 David Frei says he doesn’t know who will win the dog show on Thanksgiving Day but odds are it won’t be a Golden Retriever or Labrador Retriever. And he explains why.

I spoke to John O’Hurley, Frei’s broadcast partner and among other things asked about his two-decade highlight and asked David Frei the same question.

Frei explained what judges are looking for as they judge the dogs.

The National Dog Show Presented by Purina airs on NBC at noon in all time zones.

And one more thing – David Frei concedes he has no idea who Paul Lisnek is.