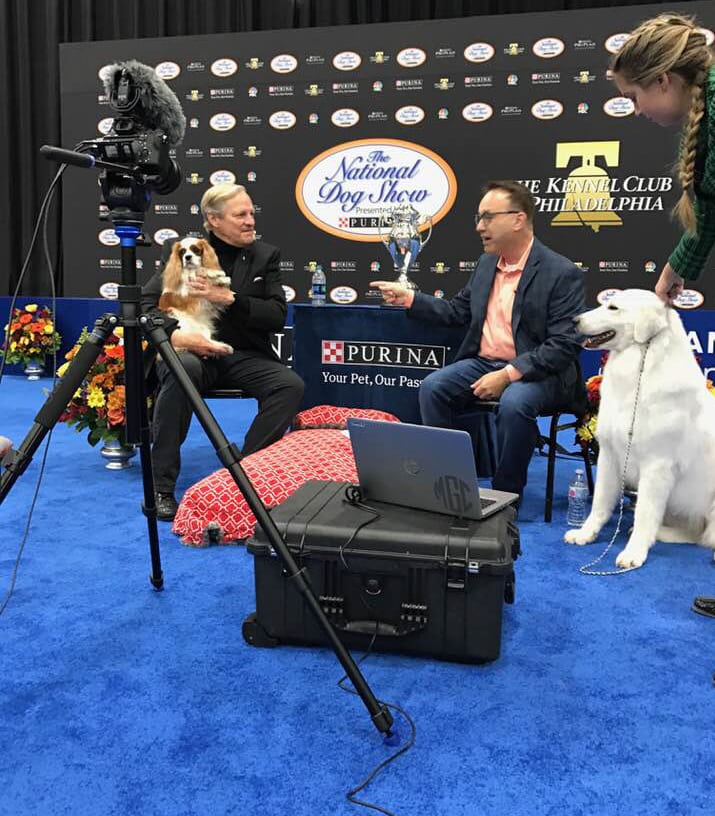 David Frei chuckles just a bit when I suggest that hitting 17 years of broadcasts for the National Dog Show Presented by Purina (broadcast at 12:00 p.m. in all times zones on NBC this Thanksgiving) means he’s as much a Thanksgiving Day tradition as the Macy’s Thanksgiving Day Parade or the turkey that follows the dog show. 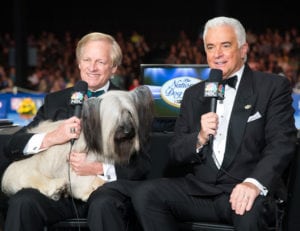 Again, he’s teaming up with show biz renaissance man John O’Hurley. “I’m sitting there talking and thinking that’s J. Peterman I’m talking to,” says Frei. “And in any moment Jerry and Elaine will walk into the room. John has embraced our dog world, he’s not just a hired performer, he’s a lot more than that.”

O’Hurley has appeared on many sitcoms, but he’s also starred on the stage, he’s hosted game shows, appeared on Dancing with the Stars, has announced golf on TV, and that is only a partial list…not to mention the books he’s authored, which include, It’s Okay to Miss the Bed on the First Jump: and Other Life Lessons I Learned from Dogs and The Perfect Dog.

Back in his Westminster announcing days, Frei was often paired with the late Joe Garagiola, and the two shared a special chemistry. On one occasion, Garagiola said on the air “Don’t you wish dogs could talk.”

Frei shot back, “Not my dogs. They’d have too many secrets to tell you about.” 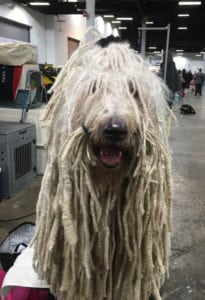 Frei says dog shows are sporting events. In fact, the judges look at a dog and then imagine if that individual dog could do what that breed was originally meant to. “Sure, show dogs are athletes,” says Frei. “And diet does matter. Not in the same way as dogs participating in more physically exerting activities, like lure coursing, agility, dock diving, or any of the organized dog sports. I have older dogs, and we feed Purina Pro Plan Bright Mind, also to keep their minds active.” 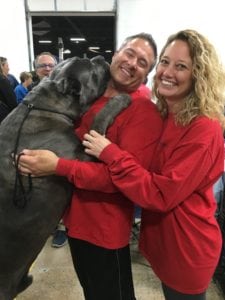 Love at the dog show: They fell in love because of a Cane Corso dog, and will soon be married.

And it’s important, Frei says, that we do keep our dogs active, since dogs typically don’t have the opportunity to do what they were originally bred for. Today, we don’t need dogs to keep the rats out of our kitchen, we have the Orkin man; we don’t need them to hunt, we have Amazon; and we don’t need them to drive our cattle to market, we have ATV’s do that for us. Today, dogs are members our family; they sleep in our beds and drink from our toilets.

But tragedy struck people and dogs this year in many ways, including the hurricanes that devastated parts of Texas, Florida, and the entire island of Puerto Rico. All, especially Puerto Rico, are struggling to return to normalcy, and need your help. Through greatergood.org, Purina is helping by contributing financially and donating food. And, you can help, too. On any social media platform, use the hashtag #dogthanking and tag @Purina, and a $1 contribution will be made to support animal victims.

This year’s National Dog Show Presented by Purina includes a record field of more than 2,150 dogs representing 191 breeds and varieties. 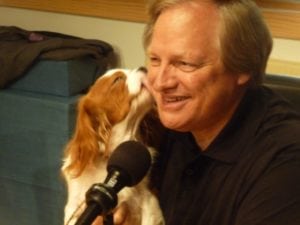 The dog show begins with dogs being judged against their same breed, so all the Cavalier King Charles Spaniels are judged against all the other Cavalier King Charles Spaniels, for example or all the Kuvasz (a Hungarian working breed) are judged against the other Kuvasz entered in the show. The winning Cavalier now goes up against all other dogs in the same group, so for Cavliers, it’s the Toy group. There are seven groups: Toy, Herding, Hound, Non-Sporting, Sporting, Terrier, and Working. The Kuvasz is in the Working Group, as another example.

One winner is chosen in each of the seven groups, and it’s those seven dogs who go up for the coveted title of Best in Show. This Thanksgiving, the National Dog Show Presented by Purina will be judged by Peter Green. 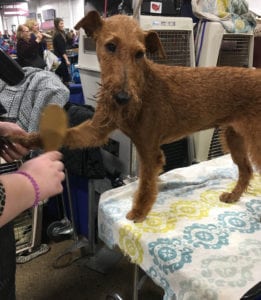 Getting ready for the show ring

Frei himself occasionally judges. He had the honor of judging at a dog show in China. Not being fluent in Mandarin, he didn’t broadcast, though four people were broadcasting and all of their commentary was heard by the crowd. “There was a beautiful Chow (a Chinese breed originally), but I wound up choosing the Shetland Sheepdog,” he says.

As for the Best in Show for the National Dog Show Presented by Purina, he says there are three dogs to watch for: