Declaw Linked to Behavior and Medical Problems in Cats, According to Recent Study 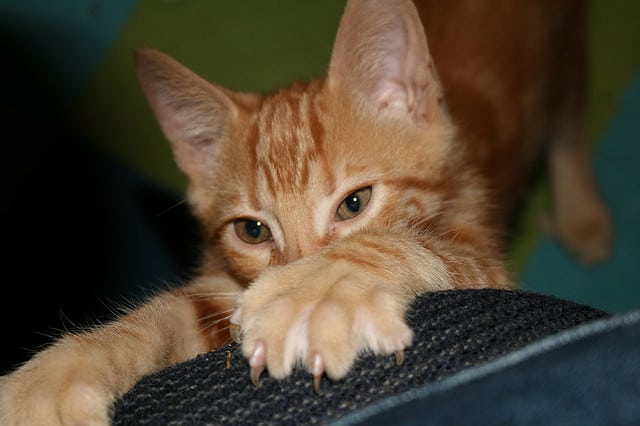 Declaw may be the most contentious issue in veterinary medicine and also amongst cat lovers. For years now, “catfights” have been breaking out all over the country, which has caused even more acrimony. 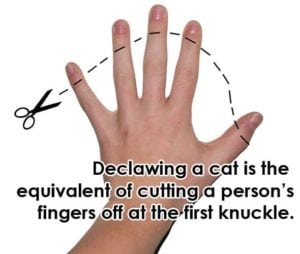 This is a declaw – an amputation

Why would a veterinarian declaw? And, with increasing science and a new product to hit the market this fall or winter, it’s becoming increasingly difficult to defend the pro-declaw position.

The primary responsibility of veterinarians—and the oath they take in veterinary school—is to do no harm. Is declaw harmful? Well, no matter how you feel, it is (almost always) an elected amputation.

Various tools are used by veterinary professionals to declaw, but no matter how you “cut it,” a declaw (onychetomy) is an amputation. During the surgery, the veterinarian amputates the end section of the last bone, which contains the growth plate along the nail.

New data is popping up on the subject, and there’s more to come. In May of 2017, the Journal of Feline Medicine & Surgery published a report titled “Pain and Adverse Behavior in Declawed Cats.” 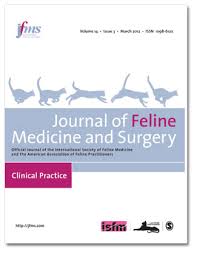 For the study, the author’s group investigated a total of 137 non-declawed cats and 137 declawed cats, of which 33 were declawed on all four paws. All 274 cats were physically examined for signs of pain and barbering (excessive grooming or chewing of fur) and their medical history was reviewed for unwanted behaviors. They found that inappropriate toileting (accidents outside the box), biting, aggression, and barbering occurred significantly more often in the declawed cats than the non-declawed cats. A declawed cat was nearly three times more likely to be diagnosed with back pain than a non-declawed cat (potentially due to shortening of the declawed limb and altered gait, and/or chronic pain at the site of the surgery causing compensatory weight shift to the pelvic limbs, about which I discussed in this story about declaw that I authored earlier in the year). The research showed the back pain was significant, particularly in a species hard-wired to mask pain.

The surgical guideline for performing declawing, as recommended by diplomates of the American College of Veterinary Surgeons, is to remove the entire third phalanx (P3), which is the most distal bone of the toe. Despite this, P3 fragments were found in 63 percent of the declawed cats in this study, reflecting poor or inappropriate surgical technique. 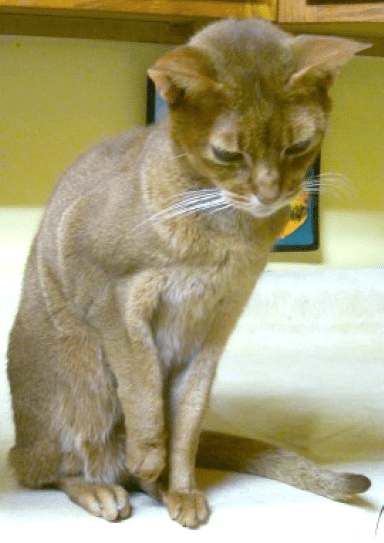 Cats may be in pain after declaw, and for life

While the occurrence of back pain and abnormal behaviors was increased in these cats, the authors emphasize that even optimal surgical technique does not eliminate the risks. They explain that removal of the distal phalanges forces the cat to bear weight on the soft cartilaginous ends of the middle phalanges (P2) that were previously shielded within joint spaces. Pain in these declawed phalanges prompts cats to choose a soft surface, such as carpet, in preference to the gravel-type substrate in the litter box. Additionally, a painful declawed cat may react to being touched by resorting to biting as it has few or no claws left to defend itself with.

People with amputations often report what is referred to as phantom pain. There’s no way to ask cats specifically if this occurs, but this study leans toward a “yes” answer, at least potentially.

One tool to help pet owners, which is expected to be released in the U.S. by the end of this year is FeliScratch. I love the notion of what this product is supposed to do, and, from what I hear, Europeans are loving it now because it works. 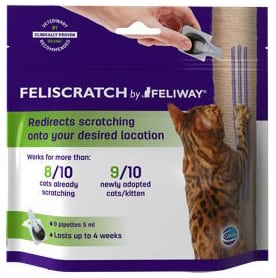 Like Feliway, FeliScratch is a copy of a naturally occurring pheromone, and when applied on the desired scratching surface, it mimics the visual and chemical signals to encourage the cat to scratch there again. Note that when cats scratch, they’re leaving their chemical signatures, which we can’t detect but other cats can.

And, a bit of catnip in the product attracts cats to it. Feliscratch (unlike a declaw surgery) has no potential adverse effects, and has been clinically proven to help reduce or stop unwanted scratching in the home, on both vertical and horizontal surfaces, and redirects cats to their scratching post(s). It’s one new tool, just one of many proven behavior modification techniques that deter scratching where people don’t want it and encourage it where people do.