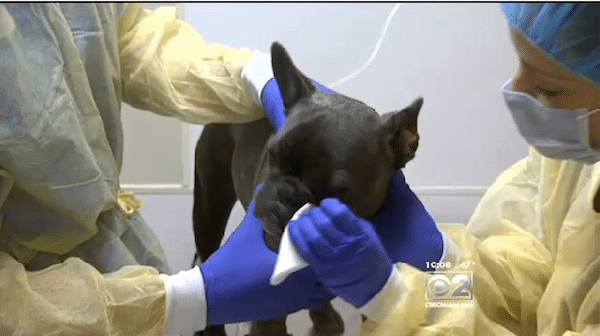 A new canine influenza virus or dog flu somehow landed in Chicago this past Spring from South Korea The bug sickened thousands of dogs in the Windy City, and killed at least eight. Then the virus proceeded to travel around the nation. Currently this particularly virulent flu, called H3N2, has been identified in 27 states, and continues to move. 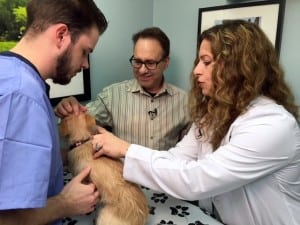 A vaccine, specifically for H3N2 is now available. This is my own dog, Hazel receiving the vaccine

Recently, a vaccine became available specifically targeting this strain. The vaccine consists of an initial injection followed about three weeks later by a booster. Like the flu vaccine in people, it may or may not provide total immunity, but those who may get sick won’t become as sick. And while most dogs do bounce back quickly from the dog flu, this strain, in particular, can hit some unvaccinated dogs so hard that they require hospitalization, and some even succumb to the virus.

Your dog flu-related questions are answered by professor Dr. Edward Dubovi, director of the virology section in the Animal Health Diagnosis Center at Cornell University College of Veterinary Medicine, Ithaca, NY and Dr. Natalie Marks, a private practitioner in Chicago who lived through the epidemic at its worst.

Q: My dog had the flu last year. How much immunity is there? Will my dog need another vaccine, and if so when? L. D., Buffalo Grove, IL 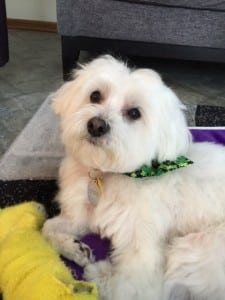 A: “We’re not exactly certain of the duration of immunity,” says Dubovi. “It’s about one year, based on what we do know.”

The good news is that for dogs who were positively identified specifically with H3N2 (as opposed to the other dog flu strain called H3N8, or not mistaken to have the canine parainfluenza virus, kennel cough or Bordetella) is that they only require a one booster shot.

“Unfortunately, with dogs or people – there’s no lifetime immunity to the flu,” Marks adds. 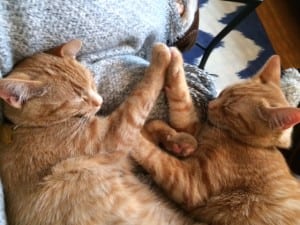 Q: I’ve gotten my dogs vaccinated for H3N2, but we also have two cats. My veterinarian says the vaccine isn’t for cats. What if my dogs come home carrying the bug or I do? S.J.,Schaumburg, IL

A: “There is no (dog flu) vaccine for cats,” says Marks. “Unless you work at an animal shelter or boarding facility, or maybe you’re a dog trainer or work at a veterinary practice, it’s unlikely you’re going to exposed to many sick dogs or dogs carrying the flu.”

Of course, vaccinate your dogs. And once your dogs are fully protected, you should feel more confident. If you’re concerned only about your cats, take off your shoes before you walk inside and and wash your hands immediately. While the virus can live and spread from inanimate objects – like your shoes, far more commonly the flu is transmitted directly from dog to dog.

Marks points out that only one cat has been positively identified with the dog flu. At her own practice (before understanding that this flu bug isn’t the previously known flu which cats can not get) and at shelters across the country, sick dogs were kept in any available space – which often meant alongside cats. Of course, many dogs that were sickened – thousands across America, live with cats. And while cats can potentially get the virus, it doesn’t appear that cats easily become sick. 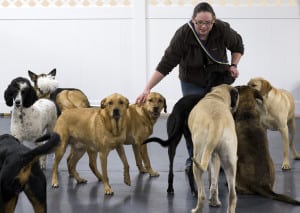 Q: The dog flu occurred here several years ago (H3N8), and now the new flu (H3N2) is a concern. Do I need to get both vaccines? I am worried about over-vaccination.  S. G., Somers Point, NJ

A: Dubovi says that it turns out that each vaccine protects against its own strain rather well, but offers little cross-protection against the other. Eventually, both strains may be combined into one dog flu vaccine, but the United States Department of Agriculture hasn’t allowed that, yet.

Marks says that while it may be safe for dogs to have both vaccines, she understands your concerns, including over-vaccination and cost considerations.

However, Dubovi adds that H3N8 remains active in places and H3N2 may arrive or already has – and in those places truly both vaccines may make perfect sense. Ad you likely live in one of those places.

Q: Do I need to wait for the dog flu season before getting the vaccine? C. H., Atlanta, GA 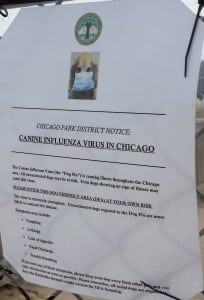 A: Marks says, “Unlike the human flu, the dog flu has no seasonality.” It may be at its worst at times, like Easter, when people board their animals

Q: I have two senior dogs who are rather fragile. Do I get them vaccinated for the flu? Nowadays they only go out to do their business. I am worried that the vaccine may actually be harmful, but then I understand they last think they want at their age is the dog flu. S. H, Chicago, IL

A: Marks says, “It’s a great question, but difficult answer depending on what you mean by fragile. For example, if the dogs are arthritic and merely old, they are very possibly candidates for the vaccine. If they suffer from serious health issues, like autoimmune illness, that’s another story. Ultimately your veterinarian, who knows your dogs, will weight risk vs. benefit.”