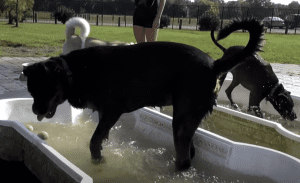 Dog parks are increasing in popularity – which is a mixed blessing, as not all dogs and not all dog owners are suitable for dog parks.

According to the American Pet Products Association 2021-22 National Pet Owners Survey, just over one-half of all dog owners take their pups to a park specifically for dogs. Millennials are especially attracted to taking their dog to a dog park, as 71 percent visit a dog park regularly. In fact, the most common explanation for not going to a dog park is that one simply doesn’t exist nearby. 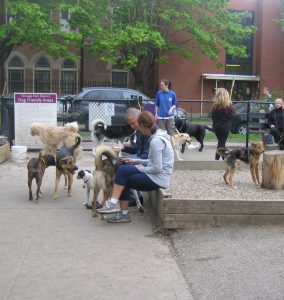 However, not all dogs are well-suited for dog parks. Dogs are inherently social animals, but so are people and just as we don’t always want to play with strangers, the same is true for dogs. Some dogs are fearful of others, or don’t know how to project appropriate signals to others of their own kind.

Some dogs do communicate, “I don’t really want to be here.”

Hints of this uncertainty include but aren’t limited to, a dog that enters the park but clearly would rather not interact with other dogs, hangs out near the exit gate of the park or becomes “grumpy,” even growling when other dogs seek to mingle, essentially saying, “get out of my face.”

Most certainly many dogs love to see regular friends at the dog park or meet new ones. Watching dogs romp brings joy and plasters smiles on faces of onlookers. It’s not unusual for spectators to show up without dogs only to watch the fun. In fact, studies demonstrate that watching dogs encourages endorphins in our heads to do a happy dance.

In a nation filled with so many overweight or obese dogs, a regular workout at the dog park is Fido’s version of joining a health club.

However, realize – there are lots of ways to exercise. What’s most important is a dog’s relationship to family. Interacting with strangers is fun for many but certainly not all, and not required for a dog to enjoy a healthy life. 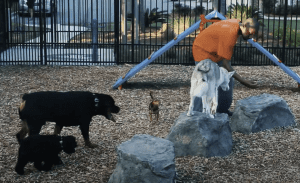 Even for dogs who may enjoy the park, there are a myriad of other concerns.

Leptospirosis is a bacterial infection living in fresh water, from ponds or rivers to puddles. Unvaccinated dogs only need come into contact with urine of infected animals such as rats, squirrels, raccoons, and other wildlife. This can happen from swimming or simply walking through and then licking paws. Lepto is zoonotic, which means it can be given to people. And leptospirosis can sicken dogs or even can be responsible for death.  Nobivac Lepto4 is the first and only 4-way canine leptospirosis vaccine specifically shown to be effective against disease, urinary shedding, and mortality. While some dog parks require this vaccine, arguably they all should.

Canine infectious respiratory disease complex (CIRDC), often referred to as “kennel cough” or “canine cough,” is a highly contagious complex that is often caused by a wide range of pathogens. CIRDC can be difficult to diagnose. At least 11 different bacteria and viruses have been linked as causes of CIRDC. And there is no single ideal diagnostic test to detect all pathogens involved in CIRDC. However, there are vaccines, which dog parks should mandate if they don’t already.

Canine Influenza Virus or dog flu: Dog flu is a relatively new disease so most dogs lack immunity. Virtually all unvaccinated dogs become infected when exposed, so the secret is protection. Unlike human flu, there are only two known strains of dog flu in the U.S. (H3N2 and H3N8). Nobivac has a vaccine for each strain, but the best bet may be one vaccine which covers both strains. When vaccinated, signs of illness become less severe (if they exist at all) and death becomes so exceedingly unlikely.

Lyme Disease: Lyme disease is a bacterial infection transmitted to dogs, other animals, and people through the bite of blacklegged ticks (Borrelia burgdorferi). While these ticks may thrive in more wooded dog parks, they do exist in city parks as well and are often active about year-round. Lyme disease is most prevalent in 35 states but cases have been reported in all 50, and increasing in number. Nobivac Lyme protects dogs from Lyme disease by triggering borreliacidal antibodies that work to kill Lyme disease—in the tick and in the dog. Lyme Disease cannot be spread directly from dog to dog but can create a chronic illness to affect a dog for the remainder of their lifetime. Dogs should also be protected against heartworm (spread by mosquitos) and in many places protection against fleas is necessary.

Distemper, Hepatitis, Parainfluenza and Parvovirus (DHPP). Commonly called the distemper shot, this combination vaccine actually protects against the four diseases in its full name. And dogs admitted to any dog park must be up to date on this vaccine.

Rabies: This vaccine is the law in all 50 states, and proof of a rabies vaccine (typically with a dog wearing an up to date rabies tag) should be mandated at all dog parks. 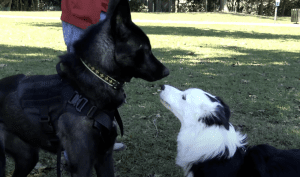 No one likes a bully, and some dogs like to push others around. The result can be a dog fight or a smaller dog being trampled. It’s up to humans at the park to “self-police,” as some pet parents are unwilling to admit their dog is the instigator. Some dog parks do have a separate fenced off area for diminutive doggies.