It’s not likely that dogs will be “working” side by side in clinics with general practitioners and oncologists, as appealing as that idea is. Maybe one day our own health insurance will cover cancer-sniffing dogs, but it’s not happening anytime soon.

So, then why does it really matter that dogs can sniff cancer? What’s the practical application? 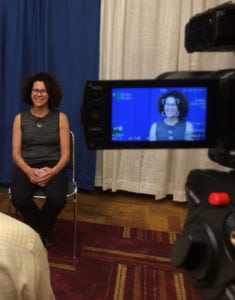 Dr. Cynthia Otto is executive director of the Penn Vet Working Dog Center, and Associate Professor of Critical Care at University of Pennsylvania School of Veterinary Medicine. Otto’s group is working in collaboration with Monell Chemical Senses Center, Penn Physics and Penn Medicine and is close to identifying which chemicals dogs are specifically targeting when they sniff ovarian cancer. The outcome is pretty astounding, as Otto says that as a result of the work, scientists may develop a blood test for early detection of ovarian cancer.

Otto is most known for studying the impact of health of search and rescue dogs following 9/11. She says this task is one of her most exciting. And – now wonder!

While her funding comes from many sources, one is the Chicago area-based non-profit, Ovarian Cancer Symptom Awareness (OCSA) which created a fund named for pet book author and certified animal behavior consultant Darlene Arden, who succumbed to ovarian cancer in February.

Often by the time ovarian cancer is diagnosed, aggressive treatment is required, and too often without success. ‘If a simple blood test could offer a very early diagnosis, many lives would be saved,” says Vallie Szymanski, OSCA co-founder and executive director.

One of several collaborators in this project is an oncological surgeon who provides blood samples. The dogs sniff the blood from patients with ovarian cancer, and are clicked (using a clicker that dog trainers use), and they are promptly rewarded with a treat and praise. Eventually, a normal blood sample is added to the line-up, but the dogs are only clicked and rewarded when identifying the cancer sample. Soon, upping the ante, a blood sample is added from a woman with an ovarian-related medical problem, such a cyst (benign ovarian disease), but not cancer. Dogs quickly learn to distinguish the difference between this “false alarm“ and real cancer. 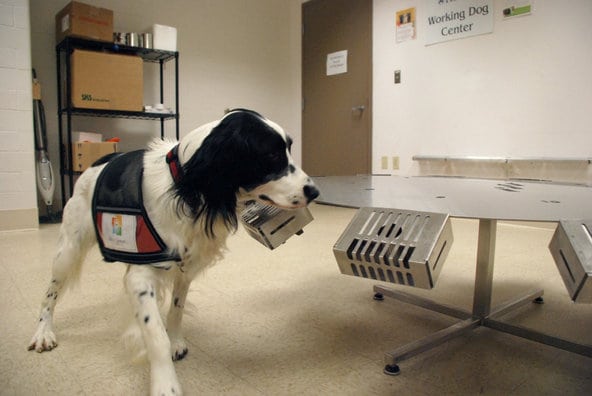 Otto says that dogs take about two weeks to begin to catch on, and after a few months of training they get it right at least 85 to 90 percent of the time.

“This is clearly statistically significant,” says Otto. “There are three choices for the dogs to choose and only one is right. It’s mind boggling as to how dogs can do this so often. I’m even amazed at the possibilities.”

But what exactly are those possibilities?

Otto is confident that as long as she and her team receive ample financial support, she’s three to five years away from developing a blood test which will essentially translate what dog are telling the researchers.

Otto notes that most ovarian cancer groups just aren’t interested in funding her work using dogs; “They don’t get it,” she says.

OCSA was also co-founded by Susan Roman, wife of a well-known Chicago restauranteur Rick Roman. “Susan was all buff and working out,” says Szymanski. “Her dog Bacchus was so persistently sniffing at her. She saw her doctor based on her dog’s insistence. She just thought her dog was trying to tell her something.”

She was right. “Susan had no symptoms, but was diagnosed with ovarian cancer.”  And despite her dog’s concerns, and reasonably early warning, it wasn’t early enough. Still out of Susan’s diagnosis OCSA was born. One of the organization’s missions is to educate women about the often silent or generalized symptoms of ovarian cancer, such as bloating, pelvic or abdominal pain, feeling full when you’re not and/or urinary problems.

“There are several reasons why we partnered with veterinary medicine from the very beginning,” says Szymanski, whose father was a veterinarian. “It’s a professional dominated by women and obviously reaching women is our target. And we’re also reaching out to veterinary students.”

“Also, I know how much our clients share with us,” says Kurt Kleptisch, DVM, of St. Charles, IL and serves on the OCSA Board. “Veterinarians know that it’s not unusual for clients to share their own health concerns with us. I point out I am not ‘that kind of doctor.’ But based on the trust clients have in me, they share. By making veterinarians aware of ovarian cancer symptoms and encouraging clients to see their doctors we’ve helped a lot of people.” 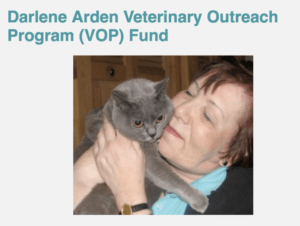 “We’ve always known that dogs can play a role,” says Szamanski, “That feeling was  based on what we knew Bacchus did. But we didn’t know how vital that role might be until we were introduced to Darlene Arden, and then Dr.Otto.”

Arden, an award-winning and celebrated pet book author was a steadfast believer in one health, long before the term was popularized. Shortly before her death, she set up the Darlene Arden Veterinary Outreach Program Fund with OCSA, which helps to fund Otto’s work.

Late last year, Arden told me, “A dog’s nose is God’s greatest miracle. It’s no coincidence that dog is God spelled backwards. Eventually, researchers on the human side may find a drug or treatment for ovarian cancer. Too many women can’t wait for that happen slow as molasses. Veterinary funded studies get things done!”

Otto says if indeed the funding comes through, and her progress continues as it is today –  a blood test for ovarian cancer will happen. And even better, once the recipe is set for one cancer, it’ll be reasonably easy duplicate the cookie cutter for other types of cancers as well.

When given that news shortly before her death, Arden said, “Thank dog!”