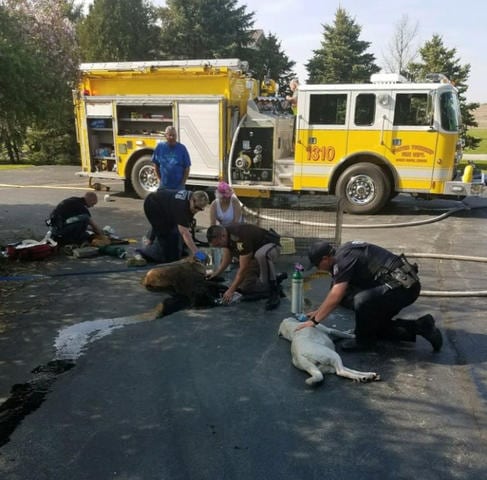 What’s not news is that firefighters are heroes. In a house fire on Tuesday, May 8 in Hebron, IN, firefights responded and foubd seven dogs, all unconscious, including two that were pregnant. 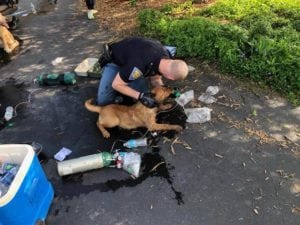 The officers and fire chief began CPR on the dogs, providing oxygen and even opening the dog’s airways to blow air in their lungs. Neighbors even came to the scene to assist. Medics arrived and used masks designed specifically for pets to provide oxygen.

Six of the dogs went to local animal hospitals by police officers, Trooper Hansen took the most badly injured dog to an animal hospital in Valparaiso, IN. As he drove, firefighter Mike Luzack from Kouts administered CPR to the dog in the backseat of Hansen’s patrol car.

State police say all the dogs, Labrador Retrievers owned by a local breeder, survived their injuries.

Boone Grove Fire Chief Mike Meinert said the pet masks used in the rescue were donated by a citizen. This was only the third time they’ve had to use them in 10 years, though these masks for pets were a big reason lives were saved.

Meinert said the fire itself does not appear to be suspicious and may have been caused by a heat lamp in the garage. The homeowners were away when the fire broke out.