Eliminating Puppy Mills: Banning Pet Store Sales of Dogs and Cats Is Only a Start 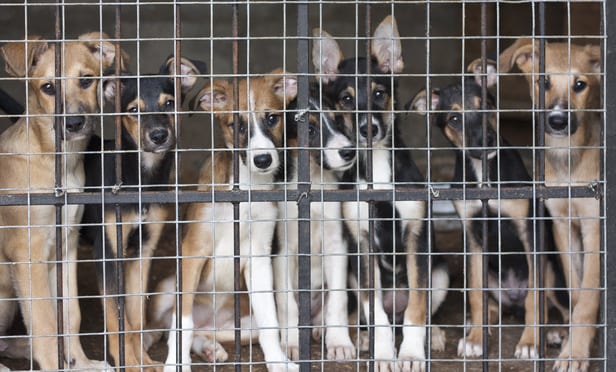 The real problem with eradicating puppy mills is that somehow some way the State Departments of Agricultures and for that matter U.S. Department of Agriculture look the other way, and at times so does law enforcement. That is a sad reality. And people knowingly or not continue to keep puppy mills in business by purchasing their products.

If no one purchased – puppy mills would go out of business.

Puppy mills are thriving in America because of online sales, often of so-called “designer dogs,” like Cavapoos or Multipoos (which there are responsible breeders for, but they won’t sell to pet stores).

The ASPCA says, “The federal government—specifically, the U.S. Department of Agriculture (USDA)—is supposed to regulate online pet sellers through the Retail Pet Store Rule, but by its own account, USDA has licensed only a handful of the thousands of breeders that sell dogs online, leaving a field wide open for abuse…. In the end, the best way to avoid finding yourself a victim of an online puppy scam and inadvertently supporting cruel breeding is to not buy a puppy online.”

Puppy mills also sell to pet stores, often through second and third party brokers, and increasingly the source of those puppies (and in some cases kittens) are difficult to trace. That’s no coincidence.

As for the line, “Our puppies or kittens were raised by loving breeders,” No responsible breeder ever sells to a pet store. Never. Ever.

That is why I so ardently support laws that prevent sales of dogs and cats at pet stores.

Why Not Ban Pet Store Sales?

The most common arguments I hear against these laws limiting pet store sales are:

These laws push people to buy online. Well, those online sales mostly shouldn’t be happening in the first place. Many are currently unlawful but not enforced. Absolutely, more education is required so people aren’t purchasing pets from irreputable sources online. But how does all of this make it right to allow pet stores to sell animals from irreputable sources?

I am also told that these laws banning pet store sales are only about encouraging pet adoption. And that supporters want to see pure bred dogs go away. Certainly, there are individuals in the rescue community who do feel that way. I most certainly do not. However, by their actions it almost appears as if the American Kennel Club (AKC) feels that way. How does supporting mass/large-scale scales operators support small hobby breeders?

I currently have a pedigreed cat, and it was a Brittany – a pure bred dog – that changed my life. I’ve had other pure breds as well, and I have no issue whatsoever if people want anything from an Affenpinscher to a Yorkshire Terrier, or a Persian cat. I only hope they choose a responsible breeder, and love whatever companion they choose.

Explain this one: On one paw the AKC spends a lot of money fighting hard against laws limiting pet store sales. But on their own website, they say always meet the breeder in person, and check out the breeding facilities. That’s obviously impossible if you purchase at a pet store.

But many of those dogs at the chain pet stores come with papers, AKC registration papers, which the AKC receives money for. I’m unsure of the real value of such papers to the average pet owner in 2019.

Of course, I want people to save dogs and cats. But it’s a free country – and if you want a Cavalier King Charles Spaniel because you like that breed’s temperament, I totally support that. And you’re right, they have great temperaments. But they are also prone to heart problems. The AKC says understand the family’s genetics before making a purchase. That’s impossible to do when making a pet store purchase.

And if somehow some pet store somewhere says the Cavalier’s family has no history of heart problems, why in the world should consumers believe this based on what we know about pet stores? Their goal is not to make a perfect match. The only question they ask, “Will that be cash or credit?”

The Public Is Catching On

Another argument I hear regarding bans against sales of dogs and cats at pet stores is the “slippery slope” argument, and that next I won’t want to see any live animals sold ever at any pet store, not fish and no bearded dragon lizards, etc. I suppose there are people who feel that way, I am not one of them. I don’t think most people are. I believe most pet owners are perfectly reasonable, those who only adopt from shelters and those with three Dachshunds at home. No one wants to see puppy mills continue. The goal isn’t to hurt the pet retail industry. And that is the another assertion – that the industry would be hurt if dogs and cats aren’t sold at pet stores. In fact, most of the pet store retailers (for better or worse) are represented by the pet superstores, and they don’t sell dogs or cats. Increasingly small individually owned pet stores want nothing to do with selling dogs or cats. Mostly it’s just a few large chains with large amounts of money to fight the pet store sales bans.

The Puppy Mill Project began as an organic online effort (no big money behind them) to stop puppy mills. As a first step, banning pet store sales in cities. In just a few years, over 200 cities in the U.S. and Canada have enacted bans. Several counties have jumped on board and now two entire states, California and Maryland and more to come soon.

In the UK pet shops are now banned from selling puppies and kittens. They want citizens to deal directly with breeders – promoting good breeders, and I agree. And I’m not alone. The move, announced by the Department of Environment Food and Rural Affairs, followed poling across the pond that found 95 percent of the public support for such a ban.

The ban on pet store sales won’t eradicate puppy mills, still it’s a step in the right direction. And it’s an important step to take.