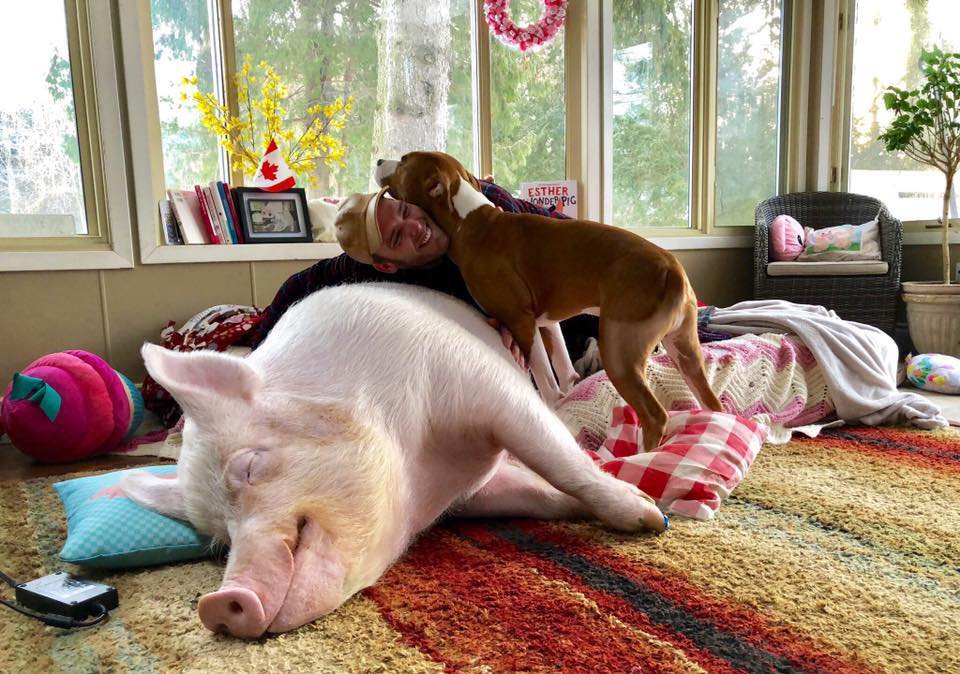 Derek already had two dogs, two cats, a turtle and koi fish. But why not one more? A friend with young children just couldn’t keep what she thought was a young miniature pot-bellied pig, which was supposed to grow no larger than a cat.  Besides, Derek, a magician though he could use the pig in his act.

The pig, named Esther, fit perfectly into the home, got along with the dogs and cats, and loved to snuggle with Derek.

About a month later, he received news from the veterinarian, Esther was healthy all right, but she was an imposter. She wasn’t at all a miniature pot belled pig but instead the veterinarian pointed out she was a production animal which somehow came from a farm. When he tried call his “friend” whom gave him the pig, he received no answer or return call.

Turns out the vet was more than correct. By her first birthday she had blown past 250 lbs; she was on track to be at least 500lb.

Meanwhile, Derek noted her intelligence. She’s house trained and even opens the back door with her snout to let herself out to pee. That’s why he began to call her Esther the Wonder Pig.

Her food is mainly kibble, plus fruit and vegetables. Her favorite treat is a cupcake. She’s bathed regularly and the truth is that pigs don’t sweat, so she doesn’t smell.

So, what do you do if you believe you house is too small to hold a full-sized pig, not to mention a pair of dogs and two cats? You move. With help from a crowdfunding campaign the family opened a sanctuary and moved there.

Today, Esther weighs in in at 650 lbs. – heavier than a female polar bear. The sanctuary has 47 residents, from cows to a peacock. And today Esther the Wonder Pig has a Facebook page with 1.5 million followers.