Why Euthanize When Other Options Exist? 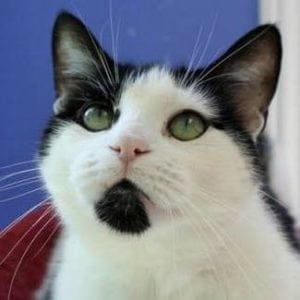 I respect an animal shelter’s executive director’s opinion with medical staff and behavior experts to euthanize an animal deemed dangerous. No-kill or not, I agree with what’s in the best interest of the public and the animal, and sometimes hard decisions may need to be made. Aggressive animals aren’t “happy” or well-adjusted. No one wins, and the public could be endangered.

In Chicago, Tree House Humane Society, which once touted itself as being Chicago’s First No-Kill facility, this past weekend euthanized Little Miss Solid Gold. She was a reactive cat, who bit staff and volunteers several times over the years. How many times depends on the reports you read or watch, or who you speak with. I was a member of the Board of Directors of this organization for 12 years, and met Little Miss at least a few times. I remember meeting her, but I don’t remember much else about her because our meetings were quite uneventful.

Little Miss was adopted as part of NBC-TV’s Clear the Shelters Day. So, clearly, at the time, Tree House management felt confident enough to put her up for adoption, but she was returned after a bite. The circumstances under which that bite happened also depends on who you ask.

Once back at the shelter, Little Miss was relocated when the Ashland Avenue location closed and her stress level, by all accounts, ramped up (predictably) and she delivered a severe bite to a staff member. The interim acting director announced to staff she would be euthanized. That’s the general back story.

I respect a shelter director’s recommendation, but only when other expertise is taken into account: veterinary and behavior specifically. From my understanding, there was no expert in animal behavior consulted.

In answer to community concerns, Tree House finally posted their view and explanation on Facebook on Monday, June 10. The organization included these words regarding animal behavior: “Yes, medications that modify behavior can be a part of therapy resulting in improved quality of life for anxious cats. However, with unpredictable severe aggression, medications do not stop severe attacks from happening and in some animals, can worsen the attacks.”

As a certified cat behavior consultant, I can assure you this is incorrect. Millions of animals (dogs and cats) are doing well today on psycho-pharmaceutical medications. The right medication with the right pet and the right dosage adjusts brain chemistry. And, I’m not the only one suggesting this; ask any veterinary behaviorist.  What’s more, behavior modification may be recommended. I suggest that vet behaviorists are heroes, because they save animals others have given up on every day. They may not save them all, but they save many. I can’t for certain say whether or not a drug was attempted to “settle” Little Miss, but the statement above seems to suggest not.

But is a drug even required? Sometimes the answer is simply placing the animal in the right home. The director repeatedly has said the problem is this cat can’t live with other cats. Well, that’s not a problem in a household that doesn’t have other cats, of which there are plenty.

This is from Tree House’s own Facebook page, regarding another reactive cat they did adopt out with great success. “After ending a long term relationship and starting fresh in a new home, I felt like my dog, Moose, and I needed a new companion who needed us just as much as we needed her. I have experience with cats who are easily overstimulated so I went to Treehouse to adopt a cat that was overlooked by most adopters. After visiting every cat on the very long list they gave me, it was Gitana who I brought home. She wouldn’t let me touch her at Treehouse, but she quickly settled in and has turned out to be so incredibly affectionate and sweet! She and Moose both meet me at the door when I come home from work, and after I put my bag down I sit on the edge of the bed and she climbs into my lap for cuddle time. She still gets overstimulated sometimes, but when she does she just steps away to relax for a moment, no swatting, and she’s doing well with her allergies. She enjoys sleeping in awkward-looking positions, and at night she almost always sleeps with her favorite fishy toy that I bought for her from Treehouse!”

I understand Gitana is a different cat, and perhaps not as aggressive as Little Miss, but perhaps not. I don’t know Gitana, so I can’t say.

It’s possible the first home wasn’t the right choice for Little Miss, and a more experienced cat owner might have been a better option. Maybe.

Here’s what I do know: Even as I write this, some dog (or cat) somewhere that one shelter can’t handle, or doesn’t have the resources or inclination to handle, is transferred to an organization that wants to help that animal. That organization proceeds to accept legal responsibility upon transfer.

When the story of Little Miss became public (I’m told by several sources that shelter management was enraged because it went public), several Tree House donors, and staff members offered to take home Little Miss and accept ownership and legal responsibility, knowing full well her background. They were told “no.”

Tree House was not interested. Still unsure what that explanation is about. How can there be any explanation?

But, it gets worse, I know personally of one rescue that reached out, and this legit organization even specializes at dealing with cats with behavior problems. I believe other rescues reached out, too; some were rebuffed and at least one was totally ignored.

The acting interim director said on TV this is not the first time a cat there has been euthanized for behavior reasons, as I and others have suggested. Perhaps, the shelter, which was founded in 1971, euthanized some cats for behavior problems in the 1970s or 1980s, but I am not alone in personally not recalling such a situation from the 1990s forward. Unless, perhaps, far more recently, there are stories like Little Miss that just haven’t been leaked to the public? I don’t know.

These days, a reactive cat like Little Miss, at an open admission facility (such as Chicago Animal Care & Control) might be rescued. It’s what rescues do, and Chicago-area cat rescues are particularly adept. Something is wrong when the organization once proud of saving cats others would not would today not save a cat that others would.

It appears the Tree House mission has changed. On TV, the acting interim director insisted it has not changed and that the organization remains no-kill. So, help me here. I don’t see the words “no-kill.” (This is a screen shot of this page) from June 12, 2017 at 10:54 p.m. CDT. Of course, there are a myriad of issues beyond Little Miss, explaining why I departed. Once noted for innovation and employee and volunteer retention, that culture at Tree House appears to have disappeared. Does the Board have the right to change the organization’s culture? Sure. Do donors, volunteers, and employees have the right to say, “But this is not my Tree House”? They do, and they are. 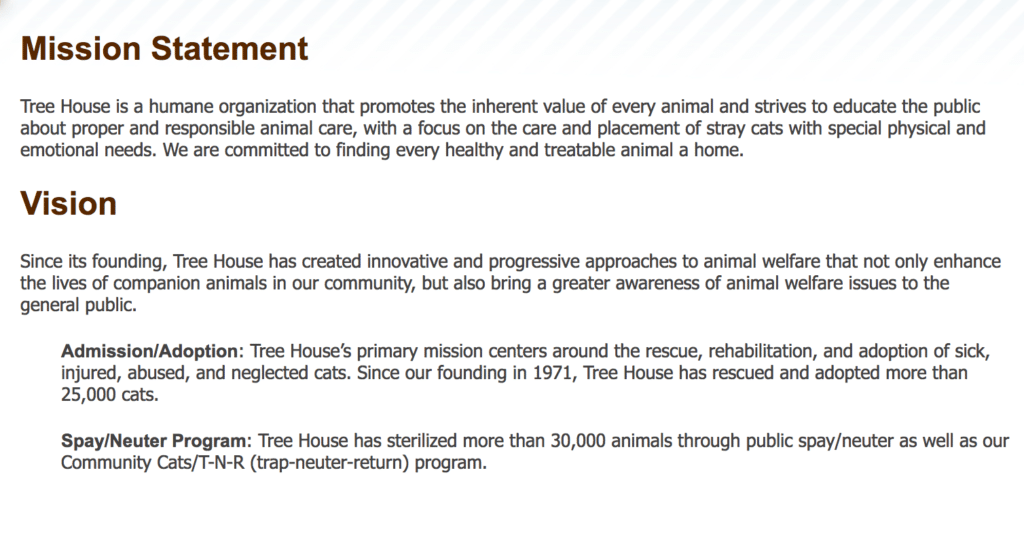