Faces of Heart Disease in Cats: Consider Stepping Up and Giving from Your Heart

Feline hypertrophic cardiomyopathy (HCM) is likely the number one cause of death in (indoor only) cats from around two-years to 8 to 10-years of age.

The EveryCat Health Foundation (previously known at Winn Feline Foundation) is raising money to fund studies about HCM through the Ricky Fund, which I founded over 20 years ago after my piano playing cat Ricky succumbed to the disease. However, the faces of HCM are everywhere. While this disease is more common in various breeds, it is also inherited genetically within families of any cat of any mix. Here are some of the faces of HCM:

Ricky not only changed my life but also reinvented the notion of what cats can be for millions by his piano playing, jumping through hoops, sitting and offering a high five and many other behaviors. 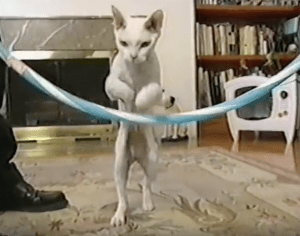 Ricky, musical genius, became media moggy, appearing on various Animal Planet shows, National Geographic Explorer, CNBC, a Canadian TV show called The Pet Project, and many other programs, including about every local TV station in Chicago as well as appearances on WGN Radio.

Ig you don’t believe it, you can even watch one of those TV appearances, from PBS, the show called Pets Part of the Family.

Ricky and I had an extraordinary bond. He’d enthusiastically join us outside on a leash and harness. He slept with my arm around him every night, greeted me at the door, and frequently spoke to me. He also seemed to read my mind.

Today, YouTube videos are filled with cats doing tricks. But back then – only around 25 years ago – people didn’t think cats could do such things.

During one routine veterinary visit, the veterinarian heard a heart murmur, and the visit turned out not to be so routine after all. A veterinary cardiologist confirmed on an echocardiogram that Ricky had an enlarged thickened heart muscle, a condition known as HCM. 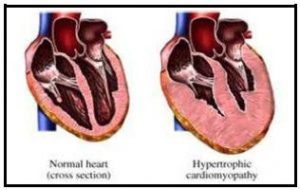 Cats with HCM may live out normal lifespans, even asymptomatic.

However, most cats with HCM ultimately develop signs that lead to death. One is called an aortic thromboembolism, or “saddle thrombus.” This is a serious condition, known also as ATE, which a thrombus (blood clot) affects the blood flow to the hind legs of the cat. It’s painful for the cat, but can usually be treated as an emergency. Cats do regain movement of their legs again. The problem is that typically once this occurs, it will reoccur. Not only does this cause the cat great pain, but repeated emergency visits get costly. Sometimes the events worsen with each occurrence. After several of these occurrences, the victim is often euthanized. 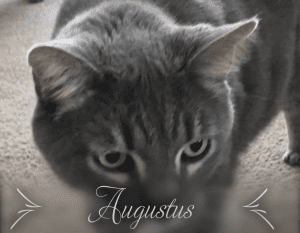 Other cats with HCM go into heart failure. Drugs may treat the signs for a time, but ultimately these cats are euthanized when their quality of life is diminished, and meds no longer help.

HCM is also the number one cause of sudden death in cats. Sometimes, the family has no idea the cat is even sick, as a diagnosis hasn’t occurred and one day the cat suddenly drops in front of the entire family. This is particularly traumatic for children to witness.

Ricky was diagnosed when he was about 2 ½ and dutifully accepted the medication, still he was only four-years old when he suddenly died in 2002.

I knew from reading the email and, and back then still ‘snail mail,’ that Ricky had touched millions, changing their image of what cats’ potential could be. But to me, he was simply my best buddy.

I thought, ‘This has to stop; we need to do something about HCM.’  So, in 2002, I launched the Ricky Fund with the nonprofit funder of cat health studies, the Winn Feline Foundation or now EveryCat Health Foundation. We’ve raised close to $300,000, and absolutely have made a difference regarding understanding of HCM, also , a gene defect has been identified in Ragdoll and Maine Coon cats. Researchers are closing in but still your help is needed. Please consider a contribution small or large to the Ricky Fund, for the benefit of all cats.