FDA Center for Veterinary Medicine Top Dog Sundlof Concedes, ‘We Have To Do Better’;

This is part 1 of a 2-part interview 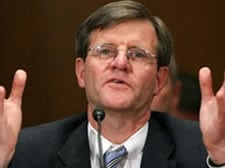 “The FDA had taken a position that foods are safe until we have a problem,” says Dr. Stephen Sundlof, director of the center for veterinary medicine for the Food and Drug Administration. “We no longer believe that model is suitable. We learned and we have to do better.”

Sundlof made his conciliatory comments by telephone in what was likely the most in depth interview he’s done since the first pet food recall by Menu Foods on March 16.  As a result of tainted food, countless pets died or were sickened, and hundreds of products were recalled.

As has been reported, two companies from China that supplied pet food ingredients intentionally contaminated the products with melamine and related substances, including cyanuric acid (a substance used in swimming pools in the U.S.). The Chinese firms sought to mimic protein content, thinking no one would in the U.S. would catch on that there wasn’t as much real protein as promised.

Sundlof doesn’t believe the U.S. pet food companies here had a clue about what was going on. But perhaps they should have. “We found out that the companies (U.S. pet food manufacturers) had recently switched to a new supplier for wheat gluten and rice protein (where the melamine and cyanuric acid was hidden) for cost reasons. When we went back and looked at the prices they were paying for some of these products, it should have raised some red flags right there. They were so far below market price for what those commodities should have been.”

Of course, many wonder why we’re importing wheat gluten and rice protein from China in the first place. The answer is political reality. Sundlof puts it more diplomatically, “World trade is increasing, but that’s how you can eat strawberries and raspberries any time of the year.”

Maybe so – but no one wants strawberries or raspberries that can kill you. The consensus seems to be that there are cracks in the food importation and production systems, and that human food could just as easily have been hit. It just so happened that it was pet food. Shouldn’t other countries export foods based on the U.S. standards of hygiene and best practices? “That’s how it’s supposed to work,” says Sundlof, who says the FDA’s 3,000 food inspectors check on both human and pet foods.

“Exporting countries are supposed to have mechanisms in place, laws, regulations and Federal oversight of those products to insure they meet our standards,” says Sundlof. “In the case of pet foods, it turned out individuals (from the two Chinese firms targeted in the recall) were being fraudulent.”

Sundlof says he understands why consumers may be more than a little cautious about any imported ingredients in pet foods, particularly from China. “Ultimately, if consumers don’t regain trust, it’s a failure of the FDA to reassure the public that any food coming into the United States is safe, no matter where it is produced.”

To ensure no further contaminated food products enter the U.S. Sundlof explains the federal government continues to monitor imported protein concentrates for human and animal consumption arriving from all countries. The FDA import alert specifically for these products sourced from China remains in effect and U.S. Customs and Border Protection continue laboratory testing of the products as they enter the country.

The good news is that that other than the possibility of an old recalled item lingering on a shelf, Sundlof says pet foods are safe again. But look at the price that’s been paid.

In part two, Sundlof addresses the issue of how many pets were sickened or lost their lives due to tainted pet food, and how in the future he endorses the establishment of a kind of Center for Disease Control established for pets. He talks about whether or not Tylenol was really in pet foods and comments on the faith so many have lost in the FDA as well as pet food companies.