Feline Practitioners Give Vaccine Guidelines Shot in the Arm

A new vaccine schedule for kittens, suggestions for vaccinating cats in shelters and kittens in socialization classes among the recommendations in the new vaccine guidelines. 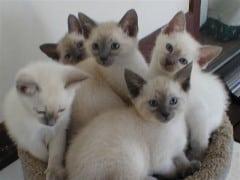 Dr. James Richards, director of the Cornell Feline Health Center College of Veterinary Medicine at Cornell, Ithaca, NY serves as the chair of the AAFP Advisory Panel. Richards served as the co-chair of the Panel which updated Guidelines back in 2000. “There was new research to consider, which is why we made some changes and also some additions,” he says. Now, for the first time, vaccine guidelines have specific recommendations for shelter cats and also for kittens attending socialization classes, commonly called Kitty Kindergartens.

Some of the new research considered was conducted by AAFP Panel member Dr. Julie Levy, associate professor, internal medicine at the University of Florida College of Veterinary Medicine, Gainesville. She discovered antibodies (absorbed from mother’s milk) in young kittens to provide immunity against infectious disease might interfere with effectiveness of kitten vaccines.

Under the previous guidelines kittens were given the primary kitten vaccine series starting at six to eight weeks of age, with additional booster shots every three to four weeks until the kitty was 12 weeks or older. The AAFP revised Guidelines, given Levy’s research, now suggests that final booster shot be given at 16 weeks or older. So, as result, many kittens will now be receiving an extra shot, which includes protection for Panleukopenia (feline distemper), and the feline herpes and calici viruses.

Levy says that several independent labs have shown as many as 25 per cent of kittens thought to be vaccinated for Panleukopenia may in fact not be protected. That is because the antibodies still present in young kittens may prevent the vaccine from working as it should. Of course, the effectiveness of those antibodies to ward off infectious diseases eventually do begin to wane – just a little later than previously assumed.

In the real world, most kittens will never be exposed to the deadly Panleukopenia virus. While veterinary medicine doesn’t officially trek infectious disease, some reports do, in fact, indicate incidents of Penleukopenia are up. “We do know we’ve seen outbreaks at animal shelters,” Levy says.

Shelters are often under-funded and under-staffed, and since many administrators argue that because so many cats will be euthanized anyway vaccinating is a waste of money.  However, the AAFP report strongly urges shelters to vaccinate kittens to prevent such fatal outbreaks, and to control herpes and calici as well.

“Nice studies show we really can protect against these shelter Panleukopenia outbreaks because the effectiveness of the vaccines begin the same day,” Levy says. Along those lines, the Advisory Panel suggests using modified live vaccines in shelter environments whenever possible because these vaccines begin to work very quickly.

Levy adds, “We know many cats in shelters are stressed and shed more virus as a result, and being stressed they’re more prone to becoming ill – it’s a viscous cycle we can stop or at least control with vaccinations as a tool

The Advisory Panel now divides vaccines for all cats into three distinct categories: Core, Non Core and Not Generally Recommended.

The only Core vaccines, which are suggested for all cats, are the series of Panleukopenia, and the feline herpes and calici viruses, as well as the rabies vaccine (which may also be mandated by law).

Non-Core vaccines are optional, based on a cat’s specific risk category which varies greatly by lifestyle (for example, whether a cat ever goes outdoors), included here are vaccines for feline leukemia (FeLV), feline immunodeficiency virus (FIV), Chlamydophila felis (a cause of conjunctivitis) and Bordetella.

Not Generally Recommended vaccines are those that the Advisory Panel believes are not particularly effective or they worry will have adverse affects. In this last category are the vaccines for feline infectious peritonitis (FIP) and Giardia.

Some veterinarians and industry experts had hoped the Advisory Panel would also place adjuvanted vaccines into the Not Generally Recommended category. Some specific vaccines contain adjuvants or substances added to them which are necessary to activate the vaccine and stimulate effectiveness. In recent years, adjuvants have been suspected of playing a role in causing feline vaccine associated sarcoma (VAS), a deadly kind of cancer at vaccine sites.  As a result, some manufacturers have newly formulated vaccines without adjuvants.

Because there remains conflicting evidence on the role adjuvants may or may not play in causing VAS, the Advisory Panel waffled. Still, the Advisory Panel does recommend non inflammatory products (non adjuvanted vaccines) whenever possible, but understanding the explanation for what causes VAS remains unknown. To facilitate management of VAS, if it does occur, the Advisory Panel recommends avoiding multiple injectable vaccinations at a single site. Also, to assist researchers in their continuing efforts to document effectiveness and adverse responses – specific vaccines are suggested to be given on corresponding specific legs (always below the stifle or elbow joint).

The AAFP published Behavior Guidelines for Indoor Cats (available at www.aafponline.org) already suggests socialization classes for kittens  – similar idea to puppy classes – but some veterinarians remain hesitant, concerned mostly about the spread of infectious disease. “It’s interesting how these classes have caught on, so we thought we’d address the issue,” Richards says.

Because kittens attending these classes are limited to seven to 14 weeks of age, the attendees aren’t old enough to have received all their boosters. But they should have received their first vaccine for Panleukopenia, and the feline herpes and calici viruses. Naturally, any kitty in a class exhibiting signs of illness should be asked to leave.

“Of course, there remains a risk of an asymptomatic carrier,” says Levy. “But more cats die of missing the litter box.” She’s referring to the enormity of cats relinquished to shelters or just let outside to wander because of behavioral problems which are addressed and hopefully prevented in these socialization classes.

Another topic discussed in feline vaccine recommendations for the first time is the practice of trapping, neutering and returning unowned cats (commonly known as TNR). Because these cats typically don’t receive veterinary care, they serve as a reservoir for infectious disease. Richards says, “In general, the AAFP supports TNR programs when they’re done correctly, and appropriately vaccinating is a part of caring for these cats,”

When done ‘right’ caretakers look after cats in colonies which vary greatly in size. Aside from tapping them for rabies vaccinations (which is generally the law), the Advisory Panel strongly recommends these feral and stray cats are also vaccinated for Panleukopenia, and the feline herpes and calici viruses with modified live vaccines at the time of sterilization (spaying/neutering). An ear tip should be done so the individual cats already vaccinated and sterilized remain identifiable.

The current mandate of responsible TNR programs is to vaccinate for rabies, sterilize and ear tip. Adding additional vaccines, though suggested by the Advisory Panel, may be hinged on economic resources since TNR is usually a function of volunteers with big hearts. Ideally, cats should be re-trapped to be boostered for rabies after one year (and then every three years thereafter), and boostered when possible for Panleukopenia, and the feline herpes and calici viruses.

The presumption is that no cat looks forward to receiving vaccines, and it’s even likely some cats are denied vaccines because their owners are more distressed than their cats. The Advisory Panel offers several administration tips, Here are some:

Aside from vets from the U.S, veterinarians in Germany, the United Kingdom and Canada served on the Advisory Panel, and the total of a dozen vets on the Panel included representatives from both academia and private practice, and among them were experts in immunology and infectious disease

The entire AAFP Feline Vaccine Advisory Report is free for the public at www.aafponline.org