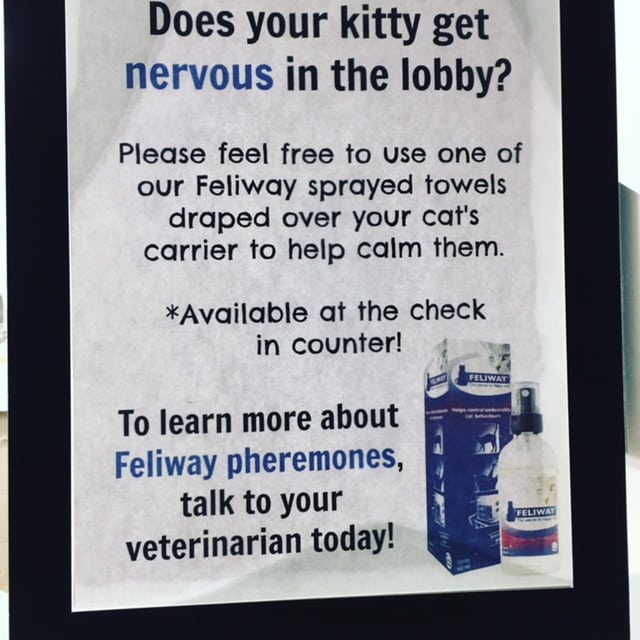 The Winn Feline Foundation supports funding for cat health studies for the past 50 years. Winn Feline mostly funds studies to support physical health, but studies have also supported emotional health. One major obstacle to visiting the veterinarian is the fear, anxiety and stress cats experience during the visit. Clients then become stressed, and even embarrassed about their cats’ behavior and may be less likely to return.  Also cats remember that stress and are even more fearful during each subsequent visit. This study, funded by Winn Feline, demonstrates the feline facial pheromone Feliway helped to effectively ameliorate fear, anxiety and stress, a goal of two initiatives, Cat Friendly Practices and Fear Free. This desciption of the Winn Feline Foundation study from a Winn report.

Pheromones have been used extensively in feline medicine in recent years for the management of many conditions including aggression, inappropriate urination, and various types of stress. The most commonly used pheromone is feline facial pheromone fraction F3, commonly sold as the commercially as Feliway.  This pheromone is naturally produced by cats and deposited on surfaces as a territory marking agent.

Previous studies have centered of efficacy in reducing urine spraying, reducing fear behavior in clinics, improving appetite in hospitalized cats, and decreasing stress during travel. The purpose of this study was to determine the efficacy of Feliway in decreasing stress and easing handling of cats during physical examination.

This study was designed as a randomized, double blinded, placebo controlled, crossover trial. Consultations were preformed in two different (but similarly sized, shaped, and designed) rooms by the same veterinarian and with the same assessor. The room was cleaned, mopped, disinfected and aired between cats and a two week period was given between treatment groups. Consultations alternated between rooms and cats were randomly assigned. Cats on any medications, with a history of chronic disease, or who were found to have abnormalities on physical exam were excluded from the study. Cats waiting more than 25 minutes were excluded.

Fifteen minutes prior to exam the exam table was sprayed with five sprays of a solution that was either Feliway or a placebo. Owners, veterinarians and assessors were blinded as to which solution was used. The assessors used a previously generated objective scale to assign scores to each cat for stress (The “Cat Stress Score”) and a newly generated scale for ease of handling. In addition, owners were asked to rank their cat’s behavior compared to previous exams.

In all, 87 cats were enrolled in the study, 29 were exposed to Feliway, 33 to placebo, and 25 to no spray (between the crossover period). There was no difference in sexual status between groups, though the Feliway group was younger than control (median 1.5 vs 4.5 years).

There were also a significantly larger number of people who ranked their own cats as “easier to handle/more relaxed” in the Feliway group compared to control or placebo.

No difference was found between placebo and control groups in any of these parameters.

This study provides further support for the idea that pheromones can be a valuable tool for the reduction of stress on cats in a clinic setting, or a tool used in conjunction with other tools. There are several advantages to pheromone based stress reduction including relatively low cost, minimal to no side effects on animals, improved quality of life for cats and ease of handling for veterinarians. While there is still significant room for further research in this area (including studies with larger number of cats) this provides convincing, evidence-based support for the use of Feliway to reduce stress in clinic.
See also:
Gunn-Moore DA, Cameron ME. A pilot study using synthetic feline facial pheromone for the management of feline idiopathic cystitis. J Feline Med Surg 2004; 6: 133–138.