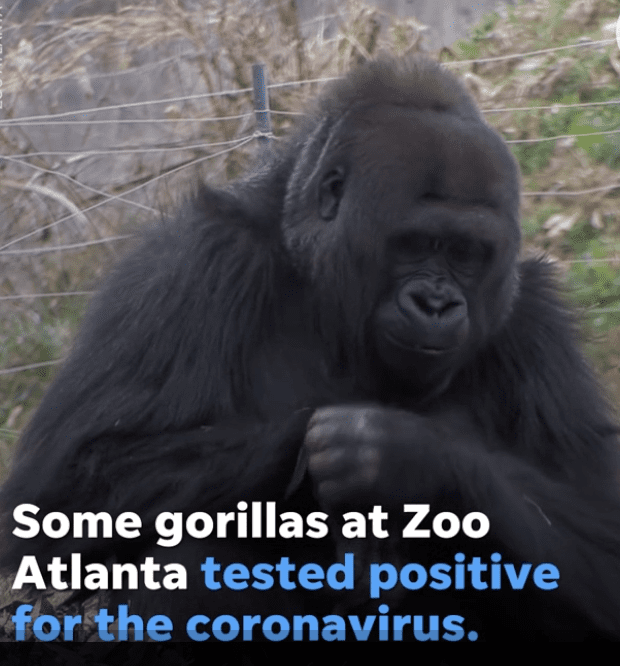 A group of gorillas at Zoo Atlanta are in line to be vaccinated after they tested positive for the coronavirus, according to a public statement from zoo officials.

The western lowland gorillas were seen coughing with running noses and a decreased appetite, prompting the initial testing. Nasal, oral and fecal samples were tested before the zoo received the initial results that the gorillas had been infected by SARS-CoV-2, the virus that causes COVID-19.

Gorillas and other great apes are susceptible to most of the same virus and bacterial infections we are. In general, gorilla species are particularly prone to upper respiratory disease, which SARS CoV-2 is considered.

The delta variant was identified in at least one of the gorillas upon further testing. Twenty gorillas live in the zoo in four different groups. All are being tested – 18  are showing symptoms. Several of the endangered gorillas are being treated with monoclonal antibodies, but the next step will be a vaccination specifically developed for animals, according to the zoo. Other zoos have already vaccinated species which appear to be most susceptible to getting COVID-19. That list of species has grown beyond mustelid family members (like mink, polecat, badgers, wolverines, ferrets, etc) and non-human primates, such as species of monkeys and the great apes species.

While it cannot be known with certainty how the gorillas acquired the virus, the Animal Care and Veterinary Teams believe the infections originated with a COVID-positive care team member. The animal caretaking team  is fully vaccinated, and routinely wears personal protective equipment.

While humans are known to be able to transmit the virus to animals such as gorillas, and these cases have occurred at other zoos, there is currently no data to suggest that zoo animals can transmit the virus to humans, though an animal most likely to do so might be a great ape. Regardless, Zoo Atlanta visitors do not pose a transmission threat to the gorillas or vice versa given the distance between the areas used by guests and the animals’ habitats. When it comes to gorillas, all zoo guests, of course, social distance.

“The teams are very closely monitoring the affected gorillas and are hopeful they will make a complete recovery. They are receiving the best possible care, and we are prepared to provide additional supportive care should it become necessary,” said Sam Rivera, DVM, Senior Director of Animal Health. “We are very concerned that these infections occurred, especially given that our safety protocols when working with great apes and other susceptible animal species are, and throughout the pandemic have been, extremely rigorous.”

The infections occurred in an area of the Zoo where COVID safety protocols are already at their most stringent. The use of PPE when working with great apes was already a standard practice at Zoo Atlanta due to their susceptibility to many of the same illnesses experienced by humans, including the common cold (often caused by other coronaviruses) and influenza. Although masks and gloves were already worn by the Gorilla Care Team when team members were inside the gorillas’ indoor areas or preparing outdoor habitats, additional preventive measures, such as N95 masks, Tyvek® suits, modified cleaning protocols and increased ventilation in the gorilla building, have been instituted. Team members never share the same physical space with the gorillas, and all interactions take place on opposite sides of a barrier with social distancing in place where practical. Team members also adhere to strict PPE protocols and social distancing guidelines among themselves, and PPE being used by the Gorilla Care Team is the same as what would be seen in human healthcare environments.