Gretchen Wyler: In Memorial to an Actress Who Wasn’t Pretending About Her Love of Animals 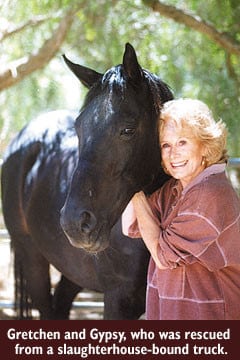 In 2004 Steve interviewed Gretchen Wyler, and wrote this story. Ms. Wyler passed away on May 27, 2007 of Breast Cancer.

Her accomplishments are too long to list. But suffice to say there would be no annual Genesis Awards if it wasn’t for Gretchen Wyler. She founded the Ark Trust and created the Awards ceremony to celebrate the positive portrayal of animals in the media in 1986.  “I am all for changing laws, but you can’t legislated how people really feel,” she says. “I always thought it was more important to change minds than to change laws.”

Talking to Gretchen Wyler is like camping out on the sofa on “The Merv Griffin Show.” “I spent a year in the touring company of ‘Guys and Dolls’ with Allan Jones, but your readers are too young to remember him,” she says. “His son, Jack Jones, of course, a great singer; and Jack’s daughter Gail has worked with the animals with us for 18 years. We’ve been doing the Genesis Awards for 18 years. Are you listening?”

She doesn’t bother waiting for a response. “That’s 18 years. Now you’ve got to say that’s an accomplishment.”

Wyler doesn’t give you time to say much of anything. You don’t necessarily interview Wyler. There’s no need. She’s been interviewed thousands of times, and knows exactly where she wants to steer the conversation. Just sit back and enjoy the ride.

“Jayne Mansfield (voluptuous actress from the 1950’s and ‘60s) had a black Great Dane. “The breeders thought Jayne was exploiting the breed,” she begins. “I was in ‘Bye-Bye Birdie’ at the time. You know, I always thought performers aren’t great mothers to children, but to a dog, I could be a great mother. And at the Westchester Dog Show, I decided it would be a Great Dane for me. I’m a dancer, and I thought the Dane was the perfect fit – beauty, power, elegance and grace. You see, these are all dancer words. And I’m describing a dog. Can you believe I had to get references? I really had to fight to get that puppy, and I spent $500; this was in 1960. I mean, back then, that was a heck of a lot of money for a dog.”

That $500 pooch went on to win Best in Show at the Philadelphia Kennel Club.

In her prime, Wyler was a big celebrity, a superstar of the stage, appearing in legendary shows like “Guys and Dolls,” “Damn Yankees,” and “Bye Bye Birdie.” If you allow her, she’ll enthrall you with stories of Jimmy and Gloria Stewart – “nice people,” she says, and how Jack Lemmon adored his standard poodle.

In 1966, she was on stage singing the song Where Am I Going, in “Sweet Charity,” and it’s at that moment when she began to wonder exactly that, where she was going with her life. While finding work was not an issue, she saw that gradually her career was beginning to wane. “Listen darling, it’s show biz, it’s about young people. And I knew I wasn’t getting any younger.”    She had recently seen a movie which showed animals being slaughtered, and had just learned about the horrors of leg-hold traps. It’s at that moment, actually while on stage, singing that tune, when she thought about those graphic images.

She decided to roll up her sleeves and get involved, and learn about animal issues. A fan had asked her to check out the local dog pound in Warwick, NY. She says she was horrified by what she saw, calling the facility a medieval dungeon.

In 1972, she began the first woman to serve on the Board of the American Society for the Prevention of Cruelty to Animals (ASPCA). She also became the first person ever dropped from the ASPCA board, that’s after she filed a lawsuit against fellow board members, charging them with corporate waste and indifference to animal suffering. The lawsuit was eventually settled out of court in her favor. Wyler is proud that as a result of her taking a stand, the result did pave way for reforms at the ASPCA. That same year (1972), she became a board member for the Fund for Animals.

All this time, she continued her work as a performer. In 1979, she re-located to the West Coat to co-star in “Sly Fox,” with George C. Scott. And quicker than any fox can escape from a hunt, she got involved in animal issues around L.A. Among her early accomplishments was successfully fighting against the selling of local shelter animals for medical research.

Wyler’s methods have never been radical. About so-called animal rights enthusiasts she says, “They always made me look reasonable, though I often think the same way they do. I’m certain you sway people through positive example, and I believe in rewarding people who offer those positive examples – that’s what the Genesis Awards are all about.”

For example she doesn’t believe it was right for PeTA to hand out fliers to kids whose mom’s wore fur to productions of “The Nutcracker.”  “I agree, I am also appalled about people buying fur, it’s a matter of tactics. Years ago, I thought we had this fur thing licked and here we are again. Rather than screaming at people or frightening small children, I say to people who wear fur, ‘I’d like to believe you’re wearing fur because you’re ignorant rather than insensitive to suffering.”

She continues, “Sometimes it just takes a while for people to catch on. We’ve been saying for years that downer cattle (non-ambulatory cattle taken for slaughter) should not be used in human food production. And if you’ve ever seen these cattle, dragged around because they can’t stand – it’s absolutely horrifying. Now, finally, the USDA (United States Department of Agriculture) has ruled downer can no longer be used for human food (though as of this writing Downer cattle may still be used in some pet foods).”

In 2002 Wyler’s Ark Trust became the Hollywood Office of the Humane Society of the United States, and Wyler named a HSUS vice president. “I was thrilled,” says Wyler, who for years had teamed up on projects with the HSUS.

She maintains in interviews that her show biz swan song came in 1997 after apepearing in a week-long run of “Hello Dolly” at the St. Louis Muny Opera. But then she’s subsequently done guest turns on “Judging Amy,” “Providence” and others. She’s the only member of that quartet of blondes who still dabbles in show biz. Who can blame her? She’s been on stage her entire life.

“I’m very lucky,” she adds. “Most people can’t find one job they enjoy, and they never find a passion in life. I’ve found two. I really do love show business. But I’m sure I love helping animals more.”

She continues and begins in nearly a whisper – well, she does have a flair for the dramatic. Still, the following speech is no act. “It’s true, I do wonder. I wonder how to stay optimistic. Jane Goodall has an unwavering optimism, which she writes about in her book ‘Reason for Hope.’ It’s tough to maintain the optimism when you know what I know. Entire species’ are disappearing forever from the world – and I do mean forever. There are more pet tigers in backyards, exactly where they don’t belong – compared to the number of tigers in the wild – where they do belong. Countless animals are still used for unnecessary and painful experimentation. Shelters are forced to kill unwanted dogs and cats; we have a society who we say love animals, but there they are in shelters looking for love. Things need to be better. We will make it better. If we can’t, we’re all in trouble. If we don’t have hope, what do we have?”