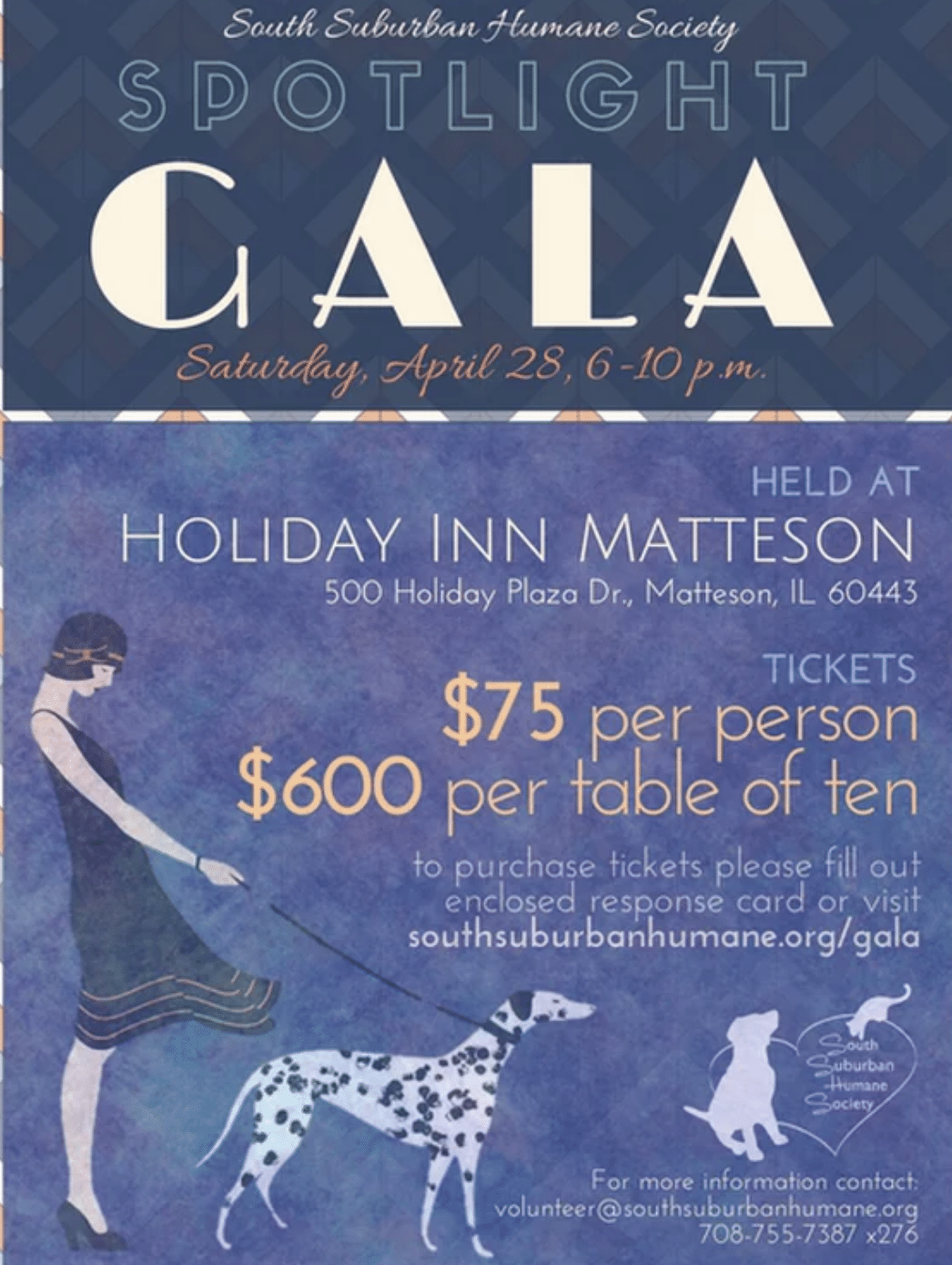 Emily Klehm of South Suburban Humane Society says shelters in Chicago need to work together more closely and on the top of everything else Animal Welfare League of Chicago “issues” place more pressure than ever on South Suburban. HEAR Emily explain more here on my Steve Dale’s Pet World, WGN Radio Show. 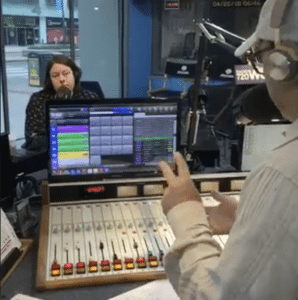 with Emily Klehm on WGN Radio

Chicago Animal Care and Control, she points out, is waving adoption fees through April because they are so filled.

Tour For Life travels throughout the United States, from North to South and East to West in four “shelters on wheels” Mobile Pet Adoption Units, helping shelter and rescue groups in 50 cities and towns in 37 states, over 20,000 miles to generate more awareness of their organizations and find homes for the adorable, adoptable animals in their care.

The 29th Annual South Suburban Humane Society Spotlight Gala is Saturday April 28 at the Holiday (or Howliday Inn), 500 Holiday Plaza in Matteson. THe event starts at 6 p.m.  Ticks are $75 per person, and includes dinner and also the highlight which is a pet fashion show that I will be the emcee for. Yes, the pinnacle of my career. 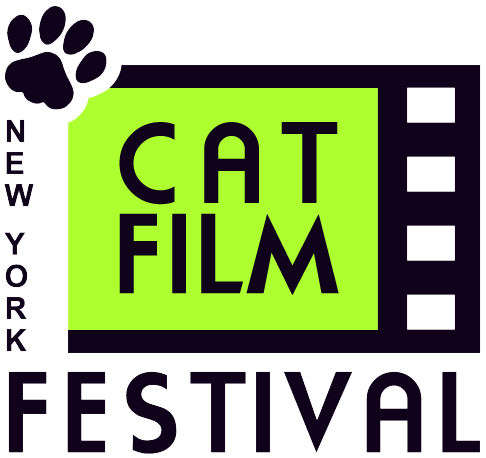 Pure Fluff (4:00) Sean Skelton’s documentary sketch of a professional cat groomer in New York City, who shows how to tackle this combative challenge.  Reunion (9:00) Megan Lohne’s tale of an animal psychic, who works his magic on grieving pet parents mourning their cat. Rescue (2:00) Filmmaker Lava Sheets’s self-portrait of the isolation and depression of a disabled woman, who realizes her devoted kitty, Apple Brown Betty, is consoling her. Jetty Cats (32:00) Sheila O’Rourke’s sweeping overview of cats throughout human history, looks at a long-surviving feral cat colony on a seaside jetty in Southern California and explores the debate about Trap-Neuter-Return as the best management for community cats. Winter Break (5:00) Rick Hamilton’s look at the thoughts of a school teacher who has only her cat for company during winter break. Amleto (2:00)  Jeff Malmberg’s visual “poem” to the morning ritual of a Tuscan cat. Mittens from Kittens (4:00) Kim Best’s documentary shows how one woman was inspired by the nuisance of cat hair into spinning and knitting it into useful items.

Little Works of Art (13:00) Kim Best ‘s look at  Harold “Cat Man” Sims and his self-styled American Museum of the House Cat in Sylva, NC, which houses over 10,000 cat-related objects and honors cats as “little works of art.” Akamatsu the Cat (10:00) Ian Christopher Goodman’s documentary about life with a disabled kitty cat, Akamatsu, who was paralyzed but went on to live another 4 vibrant years with the use of a wheelchair. Portrait of a Cat Fighter (4:00) Graceann Dorse’s mockumentary gives a funny peek at an imagined New Jersey “cat fighting ring” run by little old ladies. Guardians of Recoleta (21:00) Blake & Adrienne Kuhre (who run their own non-profit cat rescue in Los Angeles) examine the community cats living in the iconic Buenos Aires Recoleta cemetery, and what became of some kitties removed by well-meaning American rescuers.   Gus the Cat (5:00) Lisa Donato’s quirky film about Gus, a man who seems to think he is a cat.  Scaredy, the Cat (8:00)  Markie Hancock’s heartwarming documentary about a very shy cat who was adopted at the tennis courts in NYC’s Riverside park but avoids everyone except for a few choice people whom she eagerly greets.

On April 29 is the New York Dog Film Festival, supporting One Tail at a Time. It’s also at the Patio Theater, 6008 W. Irving Park Rd., at noon. 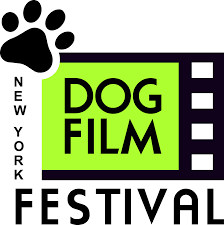 MY TRAIL DOG  [5 min] Dean Leslie’s lyrical look at a man who is a loner who runs the Alps for the joy of it, with his dogs, who are his closest companions ; DENALI  [8 min] Ben Moon honors Denali, his husky-pit mix; WALKIES IN THE WIND [1 min] charming animated film by Toby Mattison; BISCUIT [5 min] The most fearlessly athletic little dog you’ll ever meet; ONE MAN & HIS DOG  [4 min] is Dean Saffron’s look at one Australian man’s joyous skate boarding lifestyle with his Samoyed;  THE MYSTERY OF THE ARCTIC CAIRN  [54 min] John Huston’s thrilling documentary that follows a team of intrepid explorers and their 4 tempestuous Inuit sled dogs as they set out into the icy wilderness of the Canadian Arctic.

FOR THE LOVE OF DOG  [9 min] Kylie Cushman’s charming documentary that stylishly looks at the various ways British dog owners describe their love for their dogs; THE PRESENT  [4 min] Jacob Frey’s animated story about a boy and his dog that will take you by surprise; NOBODY’S PERFECT  [7 min] a touching documentary about an Australian couple whose pack of dogs each his own disability but “carries on regardless;” AWESOME LIVING WITH ANDY  [7 min] made by sisters Patricia Denys & Mary Holmes, a documentary tribute to their darling disabled dog Andy, who does just fine in his canine “wheelchair;” DOGS IN THE PEN  [12 min] Penelope Laurence’s documentary of a special program offered to female inmates to train shelter dogs as service animals;  STEADFAST STANLEY  [4 min]  John Kim’s powerful animated film about canine loyalty; PUP CULTURE  [10 min] Elle Marsh’s documentary about the delightfully odd ways that dogs are part of life in Melbourne, Australia; LOVE UNLEASHED  [14 min] a happy-endings documentary by Kacey Klonsky about senior dogs; IF I COULD TALK  [7 min] Ben Moon on the appreciation of a rescued dog.