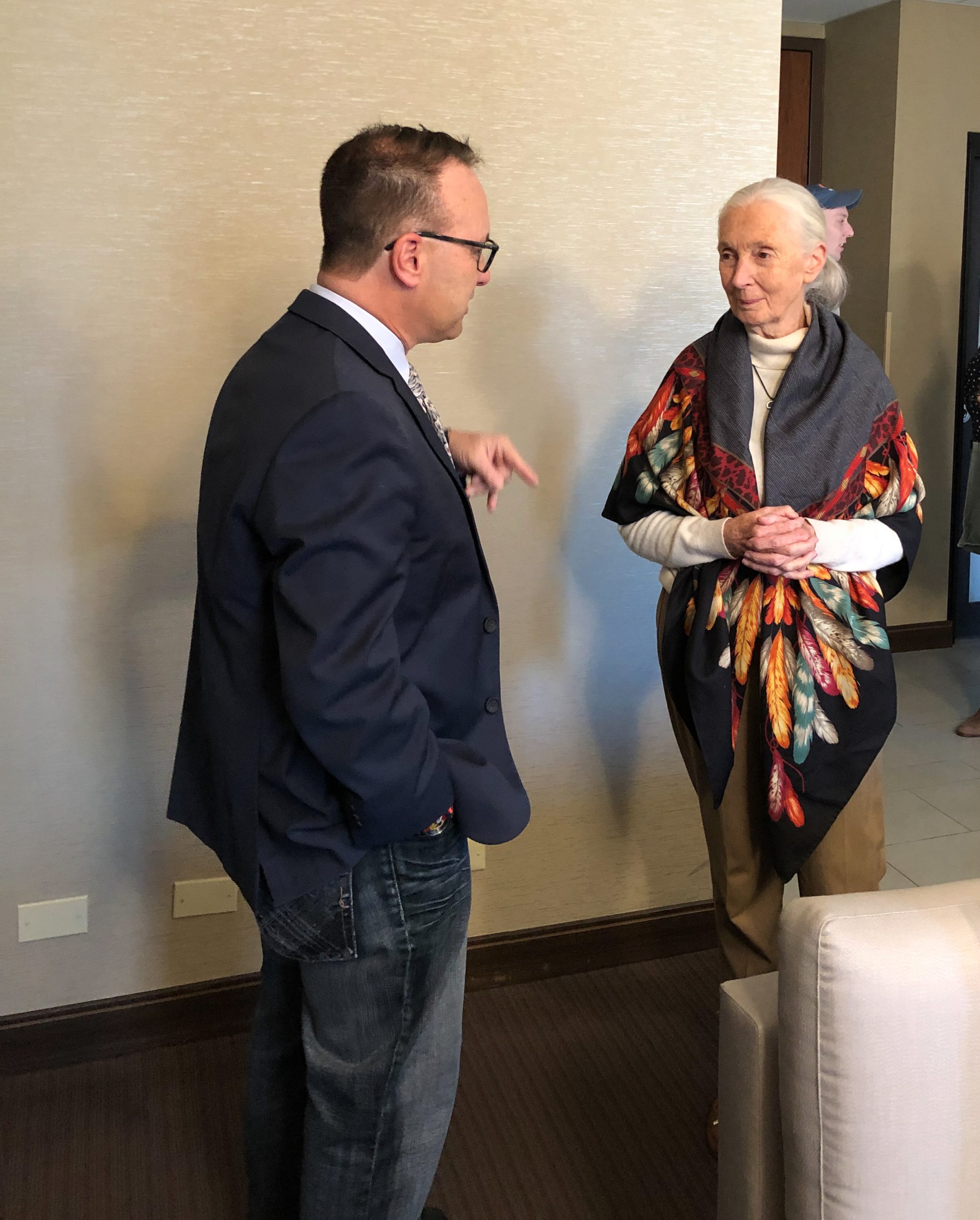 I have never met anyone like her, quiet yet so powerful brilliance, literally angelic. When I spoke to her last in 2019, she pretty much predicted a pandemic. It’s not because she was psychic, it’s because she sought to warn anyone who might listen to the fact that all the ingredients for the recipe were in place. 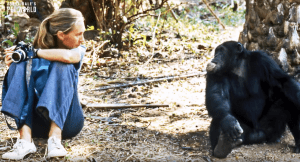 In February, 2019 there was an effort to award Dr. Goodall with a Nobel Peace Prize. I am among those who have suggested Dr. Goodall merritts Sainthood. Yes, she is that incredible. Later in 2019 , I interviewed Dr. Goodall (that interview video is imbedded below).  I’ve been so fortunate to interview her one other time in person, and twice more by phone. I was the first to write about a program very close to her heart, for children, called  Roots and Shoots for the Chicago Tribune, and here again as she was promoting two books, The Ten Trusts, with Marc Beckoff (Harper, San Francisco, CA, 2002; $23.95) and Reason for Hope, (Warner Books, New York, NY, 2003; $14.95).

For this past interview, I met Dr. Goodall at the Hyatt, Downtown Chicago. My wife Robin and I waited in her hotel suite for about 15 minutes, chatting her some employees of the Jane Goodall Institute.

I was overwhelmed with emotion as she walked into the room, but instead of crying I hugged her. It was only seconds before she observed my gorilla tie. At that time we had recently returned from seeing mountain gorillas in Rwanda, and I briefly described the experience. She didn’t say, “Where’s the chimpanzee tie?” 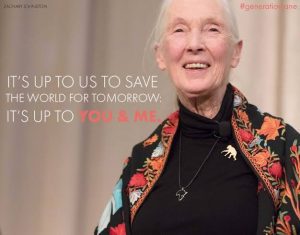 She asked my wife her opinion about which pashmina to wear, the red one or the blue one. Others chimed in, and the red one it was.

I’m unsure what we chatted about as Jim checked the lighting and inched the cameras one way or another to et just the right shots. After all, Dr. Goodall has done this literally thousands of time before. Still, this wide-ranging conversation must have been unique in some ways. 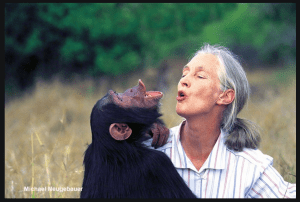 It all began, she says, when she had a dream at the age of 10 years old of going to Africa – but not necessarily as a scientist. She was the first of “Lois Leakey’s Angels” as they were dubbed (from the popular TV show of the day, Charlie’s Angels), including Dr. Dian Fossey who studied the Mountain Gorilla and Dr.Birute Gadikas, who researched the Borneo Orangutan, as well as Dr.Goodall.

Dr. Goodall explains why Leakey, the famed anthropologist, sought out “the Angels” rather than men – which was unheard of at the time.

We talked about climate change. And I asked Dr. Goodall what she says to naysayers (only in the U.S. – elsewhere in the world climate change is a given and accepted as a reality), particularly President Trump.  I asked her what she would say to then President Trump if he was sitting right here. She also commented on Brexit in the UK.

We even discussed the Fear Free initiative, and how that ties in with what she learned from her childhood dog. Of course, we’re not the only beings with feelings, and animal emotions do matter so she totally “got” Fear Free. She said that at one time she was told animal emotions don’t even exist.

Dr. Goodall said for a better world we must alleviate poverty first, and explains why that is so. We must also address pollution, and soon.

I asked Dr. Goodall what makes her happiest. And her answer, in part, “being with a dog.”