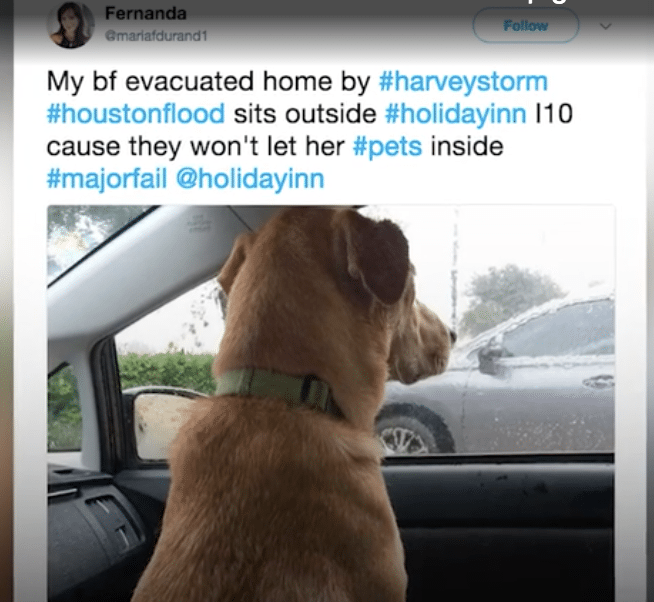 This story about the Holiday Inn Express & Suites in Katy, Texas, is shocking. Most of the largest shelter facilities in Houston and nearby cities are accepting pets, including the George R. Brown Convention Center, which is the largest of them all, and as I wrote about, even two furniture stores, which between them accepted around 800 people and family pets.

According to People Pets, it was 10 p.m. on Sunday when Gillian Parker and her husband Phillip got the call telling them about a mandatory evacuation of their neighborhood due to rising flood waters resulting from Hurricane Harvey.

The couple, their 16-year-old daughter, Allison Parker, and her 81-year-old grandmother, Sylvia Parker, packed what they could, splitting four adults and their three dogs between two cars, and rushed off. But they couldn’t get as far as they would have liked because of roadblocks. After one of their two cars stalled in water, they arrived at the only hotel they could find, the Holiday Inn Express & Suites in Katy. However, the hotel manager refused to allow the dogs.

Arrow (a Shepherd/Lab-mix), Wiggum (a Labrador/Hound mix) and Buttercup (a Labrador Retriever) would not be allowed inside the hotel.

Corporate contacts told Gillian that because the Katy location is a franchise, there’s nothing they can do to immediately override the rule.

Management told the exhausted family they’d have to go elsewhere. But there was nowhere else to stay, as the other places the Parkers contacted did allow pets but were filled.

The family had no choice. They left the dogs in the car, but a family member was always there, so the dogs were never alone.

UPDATE: Reportedly, because of the social media frenzy, Marriott heard about this, stepped in, and saved the day, providing a dog-friendly room.

Sometimes, tragedies like this bring out the best in people. There are so many stories, including the parade of boats headed toward the Houston area to offer help:

Look at all these people with their boats coming to help Houston. Heading westbound on highway 90 on the road between Liberty Dayton. ??❤️ God bless you♥️

And all of the individual heroes: