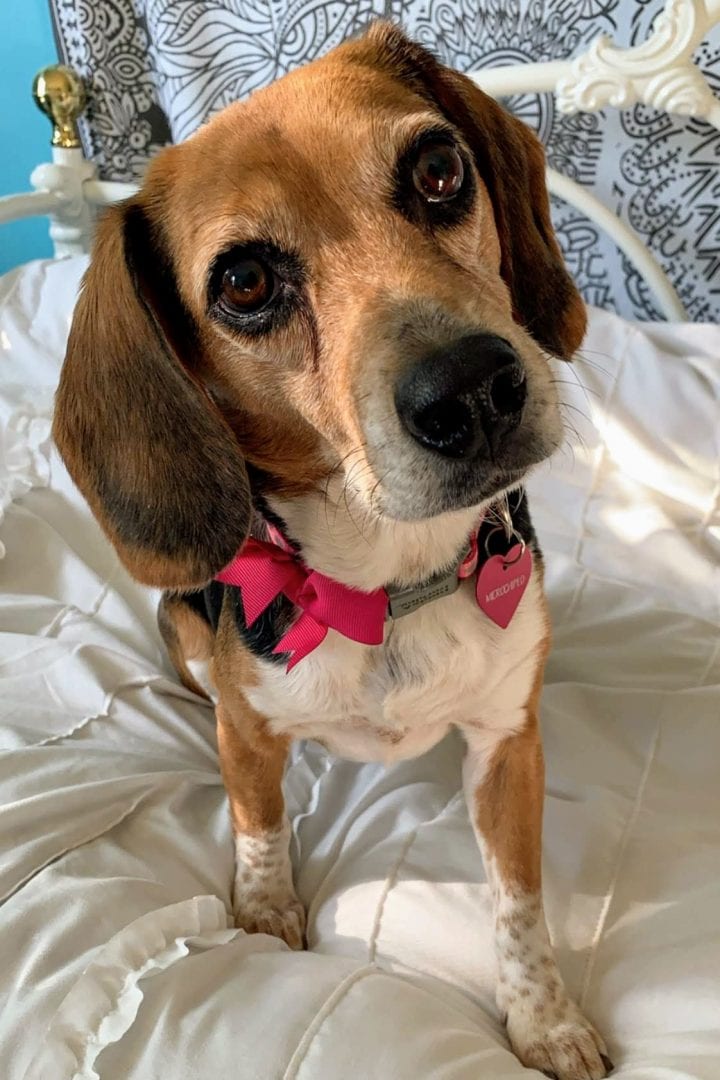 “We adopted a rescue Beagle, named Manna, who is now around 5 or 6-years old. She came from a Beagle hoarder in Tennessee. She’s not housebroken, and we’re trying to train her to go to the back door to tell us she needs to do her business, but she’s clueless. When we take her in the backyard, she just wants to sniff out the other critters. She only had a few accidents in the house because my wife takes her out so often. That works okay in June, but not so much in December.” M. W., Hoffman Estates, IL

The good news is that you can, as they say, teach an old dog new tricks. This may take a bit of time and patience. Being in a hoarding situation, some dogs like Manna are actually trained to do their business indoors. Outdoors is so foreign, they’re reluctant to do what they need to do outside, but your dog apparently does so on walks with your wife. And that’s good news. 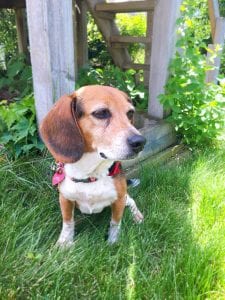 If you want her to go to the door, you can simply take her there and ask “do you want to go out?” when you know she has to. Give her a treat for being at the door – though, at first, you brought her to the door. Over time, she will appear at the door on her own – or that is the goal.

Do this when you know she’s a “loaded weapon,” like first thing in the morning.

If she typically goes out at 8AM. Wait until around 8:30AM, but do tether Manna to you using her leash, so if she does squat you can instantly rush her outside.

Take her in the yard and on a leash, limiting her opportunity to chase scents with her nose (after all, she is a Beagle).

Just pace around one spot for around for three or four minutes. This is business, not fun. If after five minutes tops there’s no success, back in the house. But then tether your dog to you, so if she squats you can interrupt by clapping your hands and rush her outside.

After five to ten minutes indoors, take her back outdoors, eventually she will relieve herself. And when she does go, simultaneously happily say “go potty” or “go woo-woo poo-poo” or whatever you want to say.

The idea is to pair a key word or phrase with the action – so in January in the snow or on a rainy September day – you will now have a cue in place to encourage the action.

Instantly after she does business offer two rewards. Use a special treat only used for this purpose. And then (if you have a secure fenced yard only) take the leash off and allow Manna a chance to sniff and run (she’s a Beagle so little can be as reinforcing) and if you so desire a few minutes of play time also. I suggest this so Manna (or any puppy being house trained) doesn’t associate the act of doing business with having to instantly go right back into the house – even if that play time is only for literally two minutes, it’s acceptable.

This method, regarding taking her to the door, isn’t only for mornings, but for whenever you know Manna’s gotta go. Over time Manna will associate going to the door with needing to go out for business.

You’re right on target to limit the number of mistakes Manna has indoors by offering lots of opportunities.

Success will happen. How quickly it happens depends on your ability and time, and how fast Manna catches on. I suggest you’ll have a dependably house-trained dog in weeks, not months in this instance – though Beagles can on occasion be a tad more challenging than some.