Marc Ayers, Illinois Director of the Humane Society of the United States, says he’s “smiling ear to ear” about the law Governor J.B. Pritzker just signed to ban retail sales of dogs and cats at pet stores, as Illinois becomes the fifth state to do so. Ayers explains HERE on Steve Dale’s Pet World on WGN Radio why this new law to cut the Illinois puppy mill pipeline will save lives. 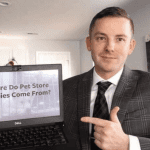 As putting pet stores out of business. Do pet stores who support puppy mills deserve to remain in business. And pet stores all over do survive and may thrive without selling dogs or cats.

Ayers suggest that it’s only right to meet the breeder and check out where the pet was bred if you choose a purebred dog, and you would be following advice from the American Kennel Club (AKC) to do so, at least according to their own book.

Purchasing through a pet store it’s obviously impossible to even know the truth about where the dog (or cat) came from, let alone to meet the breeder and visit where the animal was bred. Ayers points out the truth is that the AKC has spent lots and lots of money in Illinois fighting the pet store bill, and doing the same (and losing) all over the country. I suggest instead the AKC could make a contribution with this money to their own AKC Health Foundation to fund dog health studies to any number of great causes – including supporting their own hobby breeders. 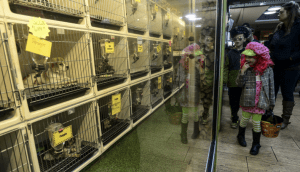 Are opponents correct? Does limiting pet store sales only drive more bad players online? Ayers says, “There’s no evidence that points to consumers due to a lack of brick and mortar pet stores are going online more than previously. In fact, we’re seeing increased adoption rates.”

Ayers notes that support for limiting pet store sales in actually one issue that does appear to be bipartisan.

Losing His Mother to COVID-19

On Steve Dale Dale’s Other World, also on WGN, Ayers talks here about an altogether different isse – his mother, Candace, who succumbed to COVID-19. She was vaccinated but on a drug to lower her immune system because she had rheumatoid arthritis. Being exposed to so much virus, she became ill with COVID-19 and passed away at the age of 66. Ayers speaks up about the need for vaccination not only to protect yourself but also to protect others in the community, which many don’t understand or selfishly don’t care about.

Stacey Coleman executive director of the Animal Farm Foundation says you can make a big difference to speak up and speak out against landlords discriminating based on breed and insurance companies doing the same.

Learn more and support by finding your insurance commissioner, who advocate for what the public wants: dogspeopleandhousinginsurance.org.

By landlords not allowing dogs or dogs over a certain weight and insurance companies profiling breeds or charging more, people do feel forced to give up their beloved family members.

Surprise: Problem in the classroom has nothing to do with COVID-19.