Illinois Could be the First State to Ban Performing Elephants 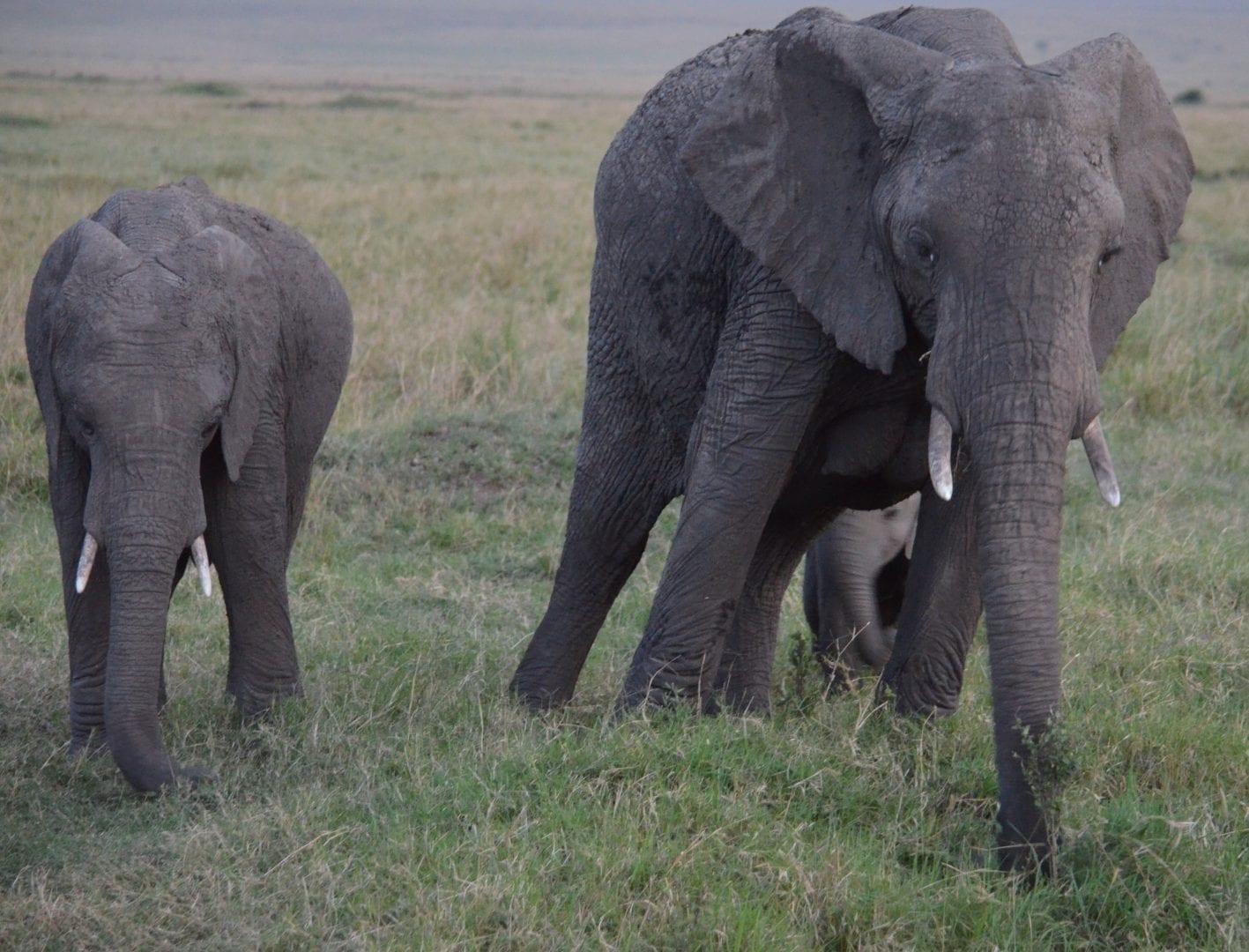 Illinois wants to ban performing elephants, and would be the first state to do this (though bullhook training is already banned in Rhode Island and California). The bill should be a no-brainer. At least you’d think so, particularly on the heels of Ringling Bros. Barnum and Bailey Circus shutting down, with the final performance in May.

Illinois Senate Bill 1342 would prohibit elephants in circuses and traveling shows in the state. Despite recent Illinois political turmoil, the bill passed the Illinois House easily with a 91-14 vote, after a unanimous vote in the Illinois Senate. Now it sits on Illinois Governor Bruce Rauner’s desk. And it sits. And, so far, nothing has happened, except some are petitioning against this bill.

The voters in Illinois clearly “get it,” and overwhelmingly so do the normally divided legislators.

You won’t see this anymore.

Carson & Barnes Circus, a smaller Ringling Bros. kind of look-a-like, which travels to primarily small-town America, was fined $16,000 by the U.S. Department of Agriculture (USDA) for an incident in 2014 during which three elephants escaped from handlers. Interestingly, it’s officials from Carson & Barnes who are now lobbying the governor to veto this bill. (By the way, Carson & Barnes was cited by the USDA for using a bullhook with “excessive force,” repeated failure to provide adequate veterinary care to a thin elephant who had reportedly lost hundreds of pounds, and repeated failure to safely handle and maintain control of elephants.)

Mark Maxwell, administrator of the Ainad Shriners, which puts on the annual Ainad Shriners Southern Illinois Circus, said their organization is also opposed. Ainad Shriners reportedly pushed out an email urging members and supporters of the circus to call the governor’s office and urge him to veto the bill. 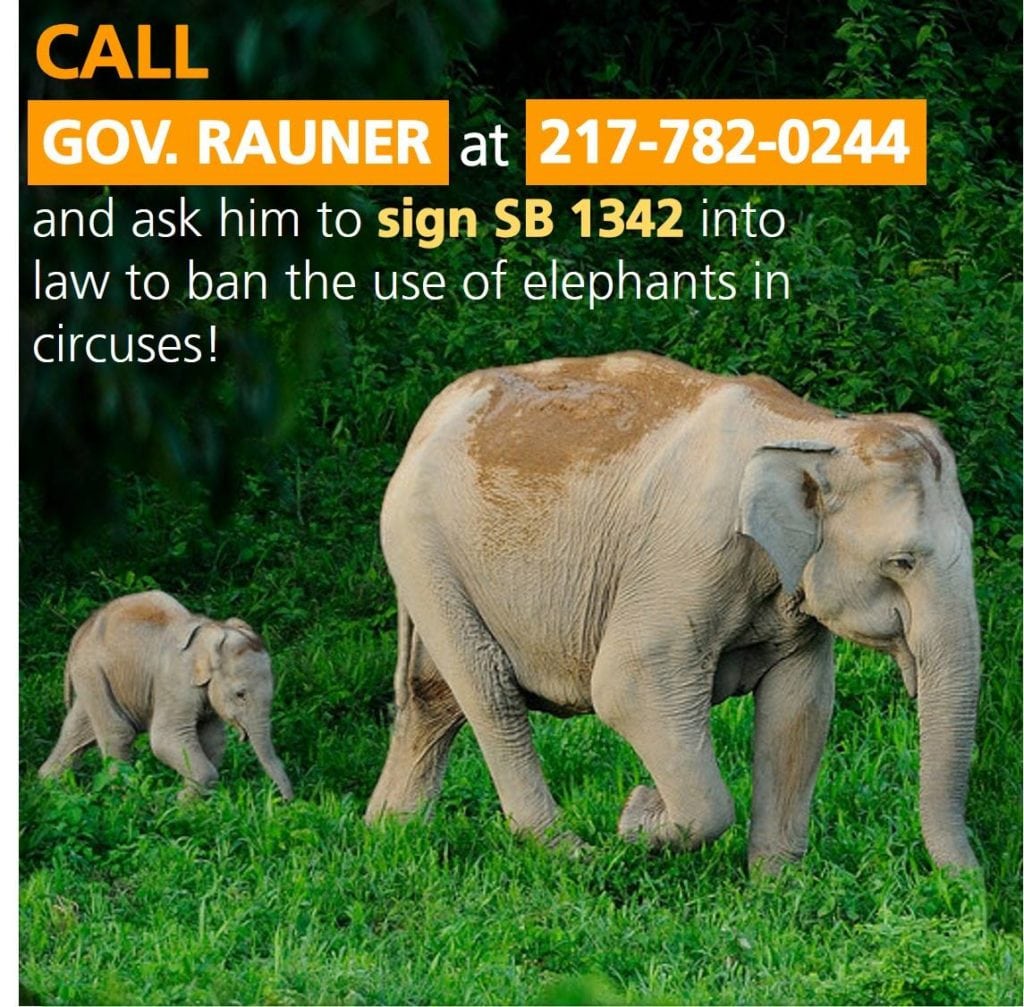 The bill’s supporters include the Humane Society of the United States (which helped to create the bill), a number of elephant conservation groups, and both the Lincoln Park and Brookfield Zoos.

The Humane Society of the United States (HSUS) isn’t alone in wanting performing elephants banned in Illinois. Most people now understand and agree that elephants’ best interests are not served by using these majestic, social, and sensitive creatures as subjects of our overbearing control for our amusement. Elephant needs in the wild can’t be replicated traveling with a circus, and some zoos feel they can’t even provide for appropriate elephant care, and have voluntarily left elephant care to institutions with additional space and resources. Also, zoos can better argue education as a core mission. One of the arguments, though, is that somehow circuses provide education regarding both endangered elephant species. 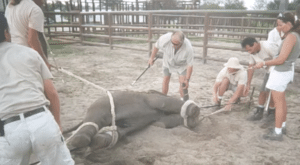 This is what you call humane training?

Aside from the legitimate humane issues regarding the way the elephants are trained, tuberculosis can be spread from elephants to humans. Three Illinois circus elephants died in the 1990’s from tuberculosis. Of the elephant handlers who were tested, half tested positive for TB.

The Illinois governor now has the opportunity to demonstrate empathy and take a humane stance. In truth, when given the opportunity to support humane issues and animal welfare previously, this governor has stumbled. This is an opportunity for Illinois to again become a leader. The hope is that other states will follow that lead, and I suspect that will happen. If there’s a reason why Governor Rauner should not sign this bill, I’m curious as to what that might be.

(Marc Ayers, Illinois State Director of the Humane Society of the United States, will talk about this issue and others at 6:35 a.m. CDT Sunday, July 9, on Steve Dale’s Pet World, WGN Radio. Listen HERE or 720AM).