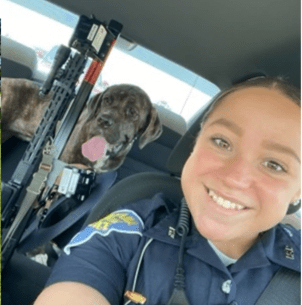 Indiana State Police trooper Allison Marlowe and at least five bystanders successfully coaxed a scared puppy to safety. The dog wandering back and forth onto I-65 in Northwest Indiana between Ridge Road and 61st Street, causing a traffic back up.  At this particular place on the highway, there was nowhere for the dog to do. Several bystanders managed to even get the dog on a makeshift leash, using a bus driver’s belt.

Marlowe said the dog appeared undernourished and dehydrated but otherwise was in good spirits as she transported the approximately five to six month old pup to Lake County Animal Control, with the pup finishing the entire bag of treats on the way.

At least one witness did note a van dumping the dog on the highway. No word if law enforcement has any additional information on the van.

Marlowe, a self-proclaimed “huge dog person” helped to organize a rescue of the scared and hungry dog. “I would not say every (trooper carries dog treats) but there’s a good amount of them that do,” she said. “I’m like, ‘dogs are going to be persuaded with food’ so I got some treats, a collar and a leash … and it came in use (Sunday).”