Denmark plans to cull its 17 million mink at mink farms. At this point, five different variant strains of the severe acute respiratory syndrome (SARS) coronavirus-2 which causes COVID-19 have been found in mink. These are changes or variations in the spike protein the virus uses to attach to (and subsequently infect) cells. A mutation that makes it easier for the virus to attach to cells of a given species, such as humans in the case of the novel corona virus, is concerning. 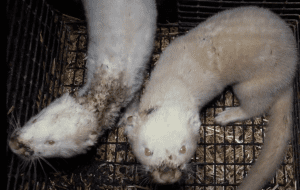 Kept in unsanitary conditions, and living unenriched and stressed lives, it’s no wonder mink are so susceptible

Health authorities found virus strains in humans and in mink which showed decreased sensitivity against antibodies, potentially lowering the effectiveness of future vaccines, according to the Denmark Prime Minister Mette Frederiksen.

“We have a great responsibility towards our own population, but with the mutation that has now been found, we have an even greater responsibility for the rest of the world as well,” Frederiksen told a news conference.

However, a concern is that a significant enough mutation could negate the impact of a vaccine and/or future therapeutics.

Well before the pandemic, I’ve written about what’s frequently referred to as One Health and the World Small Animal Veterinary Association One Health Committee. One Health is the interaction between humans, animals and environment. It’s that interaction that experts worldwide predicted would eventually cause a world-wide pandemic.

Living in the wild, humans would have about zero interaction with mink. Are mink farms necessary?

Understanding SARS corona viruses and their ability to infect mustelid species, such as mink, scientists from the start paid close attention to mink farms. Italy, Spain, the U.S., the Netherlands as well as Denmark reported wide-spread infections on mink farms. Denmark has responded by imposing restrictions based on the virus jumping from mink to more than 200 people. At least one new variant of the virus has infected at least 12 people. Canada also has mink farms.

Denmark’s police, army and home guard will be deployed immediately to speed up the culling process of mink – the nation feels the urgency.

Christian Sonne, professor of Veterinary and Wildlife Medicine at Aarhus University, said in an email he believed culling the herd now as a precautionary measure was a sound decision and could prevent a future outbreak that would be more difficult to control. Sonne co-authored a letter published in the journal Science last week calling for the cull.

“China, Denmark, and Poland should support and extend the immediate and complete ban of mink production,” Sonne and his co-authors wrote. 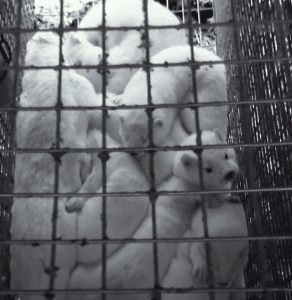 Wild mink are solitary – kept like this, they sometimes attack one another

In the Netherlands, farmers have killed well over a million mink. Farms in the U.S. produce more than 2.5 million pelts annually, according to USDA. Utah is the country’s second highest producer, processing more than 550,000 pelts annually.

In my view, it’s a great tragedy that so many more mink worldwide will be killed (which they are ultimately for their pelts). And a FAR greater tragedy if the virus has mutated to more adversely impact people (there’s, so far, no evidence of this).

It’s good news that relatives of mink found in zoos, such as badgers, honey badgers, polecats, weasels, various otter species, skunk, wolverine and others have not been affected, at least to anyone’s knowledge. And thus far, there are no reports of domestic ferrets diagnosed with COVID-19. All of these other species are related to mink.

A Danish Stans Serums Institut report  calls for breeding of mink to stop. While the report focuses on public health, I add the ethical questions. Do we really need to continue breeding mink for their pelts? While we may not be able to control Denmark, and certainly not China, we can control the U.S. Should mink breeding and mink farms simply be ended in the U.S.?