Jane Goodall is the most inspirational person I’ve ever met.

I’ve had the distinct honor to interview her on several occasions, though it has been several years. Of course, she’s a famed primatologist – but she is so much more than the person who taught us a bit more about ourselves but better understanding chimpanzees. 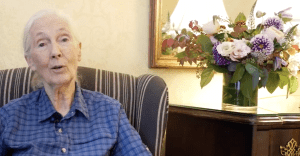 Goodall was named a Messenger of Peace by the United Nations  a Dame of the British Empire by Queen Elizabeth, as a professor she’s taught others and list of achievements and accolades is a very long one.

There’s a thoughtful, quiet brilliance and if you are lucky enough to hear here speak it’s palpable.

Many years ago, following an interview with her at what was then the Chicago Academy of Sciences, Goodall walked into the large hall she was set to speak in. This petite giant is truly elegant and soft spoken. Entering from the back of the room, it’s as though a spotlight was following her in – but there were no spotlights. It sounds crazy perhaps, but there’s a bright light that walks with this woman. The audience, as always, mesmerized by her every word. 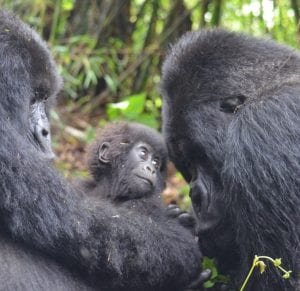 Not so crazy that we can learn from our Great Ape cousins. Mountain gorilla image by Steve Dale

After one interview, after talking about everything from the state of chimpanzee conservation to banning the use of great apes in TV commercials to dog training techniques (no surprise, she is a proponent of positive reinforcement), I told her, “I wish our world leaders took a lesson from you.”

She said nothing, and just smiled.

Today, more than ever we need to hear and listen to her lessons about life, and about peace among our own species. That’s not to mention heeding her concerns about so many other species on the planet, including but not limited to the great apes.

The Goodall Foundation told me at the time that this Chicago Tribune story, was the first major press about her “Roots and Shoots” program for children.

I have several of my own roots with Goodall. One is Dr. Marc Bekoff, a brilliant ethologist and author, and friend of Goodall’s. At Marc’s request, I was honored to write a few paragraphs for a piece to to be presented to her a couple of years ago on her 80th birthday. And another is Dr. Birute Galdikas, also a primatologist, known for her work with orangutans. I did field research with Galdikas for a short time in Borneo. Here’s an interview with Galdikas from a recent WGN radio podcast. Also, there’s the personal interest I have in great apes, having been to Virunga Mountains in Rwanda, Africa to personally visit mountain gorillas. 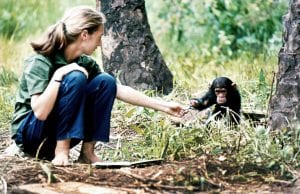 The Women’s Board of the Field Museum in Chicago is hosting Goodall, DBE, UN Messenger of Peace, Founder, the Jane Goodall Institute, on Tuesday, April 3, to celebrate women in science with a day of programs centered on careers in STEM and an evening reception for her 84th birthday.

The Women in Science Luncheon will begin at 10am, where Dr. Goodall will engage with 40 young women from Chicago Public Schools about conservation and women in science. Following at noon is the luncheon where she will address attendees as the keynote speaker. The day’s event will conclude with an evening VIP reception at the Field Museum, where Dr. Goodall will be unveiling the monument narrative sculpture by renowned portraitist, Marla Friedman, for her 84th birthday. The sculpture, titled “The Red Palm Nut,” depicts the moment when Dr. Goodall (then a 26-year-old field researcher) extended her hand to offer a red palm nut to David Greybeard, the first wild chimpanzee to allow Dr. Goodall to come close.

“In this sculpture, Marla has captured one of the most magical moments of my early time with the chimpanzees of Gombe,” said Dr. Goodall, “when David Greybeard refused my offering of a palm nut but then reached out with a reassuring touch. It is wonderful to have this commemorated in this beautiful sculpture.” All public events currently scheduled in Chicago with Dr. Goodall are sold out.

Goodall is also being considered for a Nobel Peace Price, and I suggest she is very deserving. I’m not alone. There are several online petitions, and over 30 scientists and leaders in environmental conservation are calling for the Norwegian Nobel Committee to award Jane Goodall with the 2019 Nobel Peace Prize.