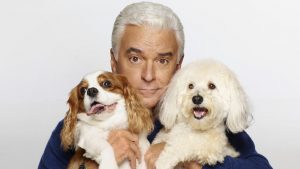 Celebrating 20 years of broadcasting the National Dog Show Presented by Purina on NBC (noon all time zones), John O’Hurley says he’s as proud of being associated with the brand as he is Family Feud, Dancing with the Stars or even Seinfeld (of course, he played J. Peterman).  As the National Dog Show has evolved it’s become a Thanksgiving Day family tradition.

The dog show ratings outshine even the Olympics or Academy Awards, and is the number two sports special on beaten out only by the Super Bowl with about 32 million viewers.