How cold is too cold for a dog to be outside for more than a couple of minutes? Even the hardiest Huskies, Malamutes and Saint Bernards aren’t bred for below zero weather – that’s even with a coat on over the one they’re born with. Also consider that despite what some Internet sites maintain, dogs do feel wind chill.

The good news is that you can protect the paws against frostbite with booties, but not ears or tails, unless someone comes up with the idea of ear muffs or tail gloves for dogs.

Sometimes a warm place for cats is under a car hood, but this is obviously a very dangerous place

If it’s below zero that may be a death sentence for cats.

Trap neuter return not only supports population control with spay/neuter, and public health by vaccinating for rabies – but also it’s the most humane option as these outdoor and unowned cats have at least some shelter from the cold when provided for by caretakers. While it may be rudimentary shelter, it may also be lifesaving when temperatures fall below zero.

Owned cats who go out into weather that cold often head right back into the house. Can you blame them? Other cats will find warm spots, and some are dangerous, such as under car hoods.

For small dogs, likely it takes more time to prepare them to go potty than the time actually spent outdoors to “do business.” Just as layering is a strategy to keep us warm, the same is true for dogs – particularly small dogs who can’t control their own body temperatures. However, if it’s below zero even layering likely won’t do the trick for small dogs.

Who Wants to Go to the Toilet in a Freezer? 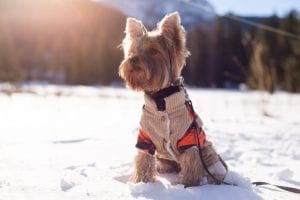 So you’re putting two layers on your Yorkie or Chihuahua, and maybe booties and still once outside your dog looks at you like your crazy. Can you blame your dog?

I really do suggest that you act as if your dog – even geriatric dog – is a puppy all over again when it’s below zero. Encourage your dog to go by saying “go potty” or “bathroom time.” This means, you have to be on the other end of the leash. While some dogs will use that doggy door or run outside to go when you open the backdoor to the yard, many won’t do it on their own. It’s just too darn cold. They may run around for a minute and head right back to the house. Or stand frozen stiff as if to ask, “Why the heck am I out here?”

I do suggest taking the dogs on-leash outside, encouraging them, and offering a special treat when they do what they’re supposed to. Some will do number one or number two – but it’s too frigid to do both. You may need more trips outside. 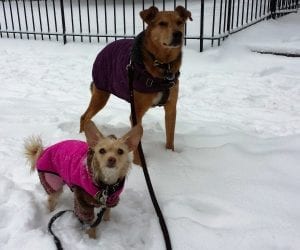 Another small dog option is to teach litter box training. There are litters and litter boxes actually manufactured for dogs. Or a plastic storage box meant for sweaters can suffice as a litter box. Is it worth teaching the dog how to do this? That depends on how many very cold days you expect to have.

One tip is to play with your pup before going out. For one thing, at least your dog will get some exercise. But movement also “motivates” the bladder and bowels to work, as opposed to just laying around.

Protect Small and Geriatric Dogs Most

Of course, very small dogs require the most protection against the cold. Next in line are sighthounds, like Greyhounds, Salukis and Whippets who may carry with them only eight percent body fat. They do often require coats even when temperatures are as high 45 degrees, or better for them is to change your address to Hawaii.

Just as elderly people have more issues maintaining their body temperatures and suffer stiffer joints in very cold weather – the same is true or elderly dogs of any breed or mix. Even that Husky who once relished the snow and cold, may not require a little protection to stay warm at the age of 13 years.

The combination of ice and cold and snow, and especially with street salt added to the mix, will sting dog paws. Little ice balls can form between the paw pads, and this hurts – which is why dogs sometimes hop in the cold, or don’t even want to walk.

There are three possible solutions for this problem:

A common concern, particularly as the weather hovers from just below freezing up to the 30’s or when it’s been warm and now it’s really cold is that the ice on ponds, rivers and lakes may not be as solid as you think. Every year there are instances of dogs falling through thin ice, and worse people succumbing attempting to rescue pets.

Winter can be challenging for some pets and a whole lot of fun for others – no matter, we need to do our best to keep them all safe.