As Lone Star ticks continue to spread from now all the way to the East Coast and from Maine to Florida, and into the midwest; the number of people suffering an allergic reaction to red meat as a result of a tick bite is on the rise.

Generally, when tick disease impacts people, the same happens to dogs though symptoms in dogs may vary. It’s unknown as to whether a food allergy as a result of a Long Star tick bite might occur in dogs. 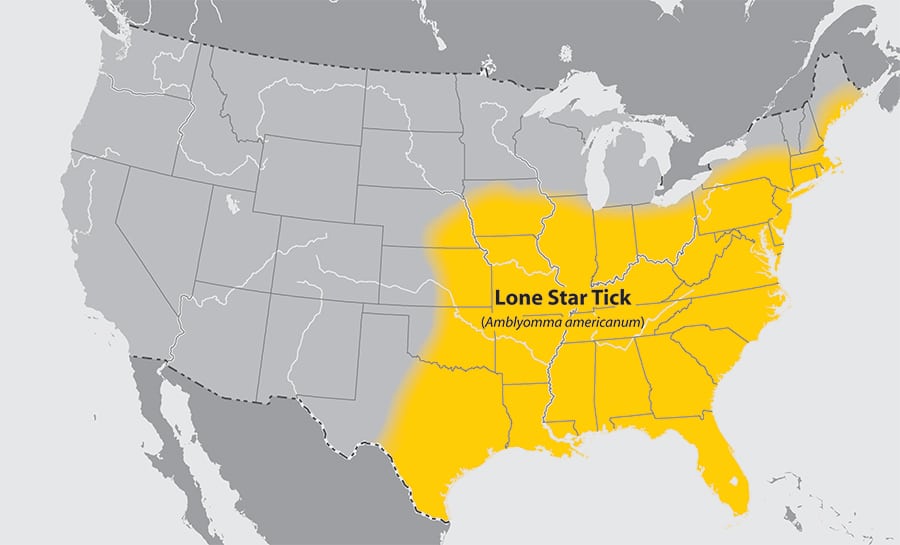 This once rare allergy still takes doctors and patients by surprise when it occurs. After all people who are fine with red meat their entire lives affected.

Lone Star ticks carry a sugar called alpha-gal, which is also found in red meat, but not in people. Normally, alpha-gal in meat poses no problems for people. But when a Lone Star tick bites. a person, it transfers alpha-gal into the bloodstream. As a result, the person’s body produces antibodies to fight the sugar. The next time that person eats red meat, their immune system responds to the alpha-gal in the meat and they suffer an  allergic reaction that can include itching, burning, hives, and even throat swelling.

In cases of mild allergic reactions, those symptoms can be treated with antihistamine. Some patients require epinephrine to prevent anaphylactic shock.

Little else is known about this allergy, such as whether or not it is permanent, or whether it takes one bite or more to cause, and why some people appear susceptible and others may not be.

The Lone Star tick is a medium-sized, reddish-brown tick that’s common in the Southeastern United States. It gets its name from a white dot found on the backs of all female adults. Nymphs are the size of a lower-case “o” in newspaper print, expanding to the size of a zero when fully engorged, Adult ticks are the size of a capital “C,” but engorged, can swell as large as a raisin.

Lone Star ticks bite humans and dogs by inserting needle-like mouth parts into the skin, while backward-facing teeth act as hooks, securing them in place.

One in 35 dogs test positive for ehrlichiosis (spread by the Lone Star Tick, and other tick species), according to the Companion Animal Parasite Council.

From the Centers for Disease Control on the Lone Star Tick

Where found: Widely distributed in the southeastern and eastern United States.

Comments: A very aggressive tick that bites humans. The adult female is distinguished by a white dot or “lone star” on her back. Lone star tick saliva can be irritating; redness and discomfort at a bite site does not necessarily indicate an infection. The nymph and adult females most frequently bite humans and transmit disease.