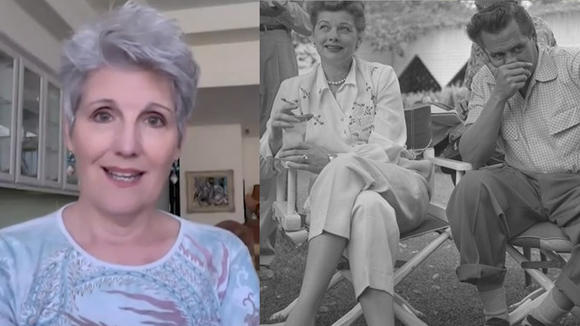 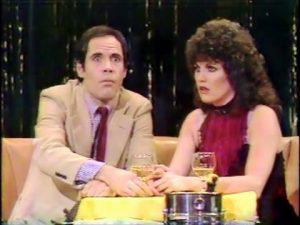 Lucie Arnaz and Robert Klein from They’re Playing Our Song

She is her mother’s daughter. Lucie Arnaz tells it as she sees it. While so many (me included) described Lady Gaga’s moment with Liza Minnelli on stage as a “sweet moment,” Lucie says HERE on Steve Dale’s Other World, WGN Radio that she doesn’t at all agree. She says, “Liza (who she has known forever – and her brother famously dated Liza many years ago) deserved better.”  However, she loved Jamie Lee Curtis appearing with a puppy when the late Betty White’s image appeared.

Her Broadway and theater credits are too numerous to mention, and was only a few years ago (she was 63 years old) when she appeared in the show Pippen. She calls it the coolest accomplishment of her entire career because of the acrobatics she had to perform (and without a net). “I’ve always been sort of brave,” she explains because that’s what she did week to week on Here’s Lucy. She learned to say “yes,” and then learned something new from whatever it was she said “yes” to from week to week, from riding dressage to learning real Hula dancing.  For example, how Lucie, Lucille Ball and Ginger Rogers self-choreographed the Charleston and so many years later this number went viral to the tune of Beyonce’s Single Ladies. 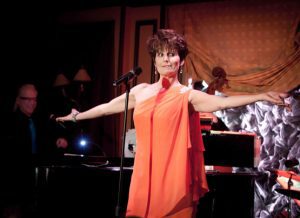 We talked about Lucie going back out on the road, including a trip to Africa (February 8 to 18) which she is taking friends and fans. Learn more about that here.

We talk about the resurgence of the popularity of Lucille Ball and Desi Arnaz, including the Academy Award nominated Aaron Sorkin movie Being the Ricardos and the Amy Poehler documentary Lucy and Desi. She explains why she was so pleased that the documentary came along which explored the story Aaron didn’t tell. And she describes how she personally found audio tapes of Lucille Ball interviewing celebrities Let’s Talk to Lucy in 1964 and 1965 (which are fascinating to listen to).

(Personal note: On-air Lucie said “I really enjoyed this interview” but she must have meant it as we already are working on scheduling a part two.  I enjoyed it too although she’s not an ‘easy interview.’ After all she been asked everything a million times.)