Mass Murderers Would Have Been Stopped If Arrested for Animal Cruelty

There are several red flags which could have fully prevented the mass murders at the Topps Supermarket in Buffalo N.Y. on May 14 and the in Uvalde, TX at the Robb Elementary School.

Animal cruelty is linked to violent crime. This fact was proven by Phil Arkow decades ago, coordinator of the National Link Coalition.

Both shooters allegedly abused animals. And what’s more, apparently celebrated their exploits in social media, so people were aware – yet nothing was done. 29 lives might have been saved.

Where were authorities?  Of course, law enforcement can’t act on what they don’t know and at this juncture it’s unclear if the animal abuse was reported. Where were family and even bystanders who viewed the carnage in social?

For example, Payton Gendron, 18, mass murderer in Buffalo, according to several sources, including the Buffalo News stabbed and decapitated a feral cat in March.

However, as is often the case with animal cruelty, Gendron’s mutilation of the cat didn’t become publicly known until he revealed it in a racist diatribe he shared on the social platform, Discord, shortly before the slayings.

At least according to the Buffalo News, Payton’s parents, Paul and Pamela, did tell police but not until after the shooting that their son had recently killed and beheaded a cat. If that is true, maybe it’s time we prosecute parents for not reporting animal cruelty.

Texas State Police maintain they have found no apparent motive or warning signs regarding 18-year old Salvador Ramos massacre in the middle school, with no documented history of mental illness or criminal record. However, he allegedly boasted to friends that he “tortured” animals, according to various published sources. So, clearly there was a significant warning sign. 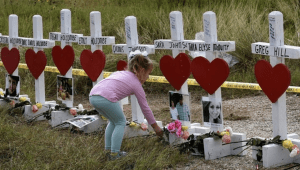 Ramos boasted about torturing animals and aired his acts of animal abuse on the French live streaming platform Yubo.  “Let me tell you about Salvador,” says Jamie Arellano, according to the Daily Beast, who attended Uvalde High School with Ramos. “He would go to the park and try to pick on people and he loved hurting animals.” Why didn’t friends report animal abuse?

It’s unclear at this juncture if Texas law enforcement was aware of his animal abuse. If not, why not? Were Ramos’ parents aware? If not reported, why not?

Here’s an ideas I would hope both sides of the aisle would agree upon.

“We are debating red flag laws to allow authorities to seize guns from people who exhibit violence,” said Wayne Pacelle, president of Animal Wellness Action. “We know that so many of these mass shooters put their violent instincts on display by beheading cats or otherwise torturing animals.”  Pacelle is pushing the Animal Cruelty Enforcement Act, H.R. 1016, at the federal level, so that our government actually brings cases and prosecutes people engaged in malicious animal cruelty.

Imagine what might have happened if law enforcement was able to actively intercede earlier in both these instances. Certainly, this isn’t the only answer to mass shooting as mass murders don’t always act out on animals first, but they often do; the Link is real.