Should Michael Vick be named as a National Football League (NFL) Pro Bowl captain? There are two relevant questions. First, on the field, football pundits suggest his career hasn’t been consistently stellar for a length of time. Which brings me to the second and far more important question, his career was interrupted by a jail sentence which he served for dog fighting. So far, over 82,000 people say “No,” he should not be representing the NFL as an all-time great, according to a Change.org petition (which I encourage my readers to sign).

If Vick profusely apologized, I missed it

The petition comes after the NFL announced on Monday that Vick will be one of the four captains for the January game between the best players from the NFC and AFC. The three other captains include Hall of Famers Terrell Davis, Darrell Green and Bruce Smith.

In 2007, Vick, then an Atlanta Falcons quarterback, was found guilty of one count of killing dogs and one count of promoting dog fighting, leading to a 23-month prison sentence and an indefinite suspension from the NFL. There’s no doubt, Vick got off fairly easy considering what we now know about the extent of what he did, which is to this day has only haltingly apologized for.

NFL Commissioner Roger Goodell did a turnaround, of sorts, following Vick’s release from prison as he was given a conditional reinstatement to the league from NFL  Vick joined the Philadelphia Eagles in 2009 with impressive but not superstar stats and played for seven more seasons, including stints with the New York Jets and Pittsburgh Steelers.

n 2010 President Barak Obama even spoke out against Michael Vick.

Wayne Pacelle and Vick on tour

In order to improve his image, Vick had hit the road touring with then CEO of the Humane Society of the United States (HSUS) Wayne Pacelle, speaking to various groups about animal welfare. They appeared together at highly orchestrated events, which protected Vick from the public. I was among those critical of the “tour.” At the time, I was serving on the Board of Directors of the American Humane Association, and we voted ‘no’ to the same offer which the HSUS accepted. I felt the tour only confirmed Vick’s celebrity status, which he didn’t deserve. And, perhaps as a result of lawyer advice, if there was a heartfelt apology – I missed it.

Vick became an NFL TV analyst for FOX Sports. Along the way, Vick adopted a dog into his home. Meanwhile, his “fighting dogs” had all been rescued by Best Friends. Jim Gorant of Sports Illustrated wrote a great book about those dogs, called The Lost Dogs. Many were adopted, and demonstrated the loving and forgivable nature that dogs can have when given a second chance, some of the dogs even participated in animal assisted therapy activities. 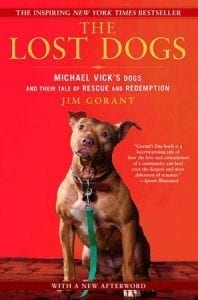 I noticed one online comment, “Really? Taking a knee during the national anthem is a far more punishable offense than the brutalization of 100’s of innocent dogs. Micahel Vick was convicted of running a cruel and inhumane dog fighting ring and lying about it and get’s rewarded; Colin Kaepernick loses his career for trying to raise awareness of the mistreatment of Black men and women. Thank you NFL for having your priorities straightened out. Disney, Shame on you as well as The NFL!” 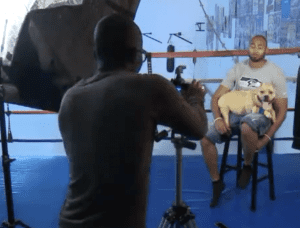 Meanwhile, there are NFL players who do the right thing.  Sadly, there is a need because dog fighting continues, and is today a Federal crime.

“It’s not a sport. It’s animal cruelty, plain and simple,” said Wright in a video he recorded the AMC Kickboxing and Pankration Martial Arts School in Kirkland, WA. It’s part of a new campaign being launched later this week by Pasado’s Safe Haven, a non-profit trying to end animal cruelty.

Wright’s co-star in the video is Meadow, a 3-year-old American Staffordshire terrier-type dog (really, she’s a dog you look at and call a pit bull). Meadow had been stuffed in box and thrown from a truck. She had life-threatening injuries, and is thought to have been a bait dog to train dogs to fight. Meadow has hundreds of scars and her injuries are consistent with being a bait dog.

One thing Vick did is to heighten awareness regarding the atrocities associated with dog fighting. However, that doesn’t at all make what he did right. He served his time, and should be allowed to go on with his life – but not necessarily to be celebrated. No coincidence the NFL release regarding Vick being on the Pro Bowl team had no mention of the dog fighting conviction, as if that never happened.